I have created a circuit for my Senior Design project at my uni. This circuit is meant to receive a signal from a contact microphone attached to a brass instrument, pre-amplify it, and analyze to find the pitch of the note played on the horn. Once the frequency is found, the board then does two things:

When testing the circuit, we programmed the Teensy 4.0 to do a PWM signal sweep on two pins: PWM_A and PWM_B, with PWM_A being a non-inverting input for the HIP4080AIBZ and PWM_B being an inverting input.

When the board was turned on, the Teensy booted up and began driving the motor. It got maybe a half second into the sweep and then died. The motor started turning during that half second, but stopped once the teensy died.

This circuit is powered by a 3S LiPo Battery.

Here are some screenshots of the schematic and the PCB. Do you guys see any glaring issues here? What could have killed the teensy? Did >3.3v get applied to one of the output pins somehow? Could the voltage regulator have failed somehow?

NOTE: Originally, the voltage regulator used was an LM317T, but after finding that the regulator was not regulating to 5V, we changed to an LM1086IT-5.0. 2oz copper was used, and the motor is a BaneBots 550 motor. 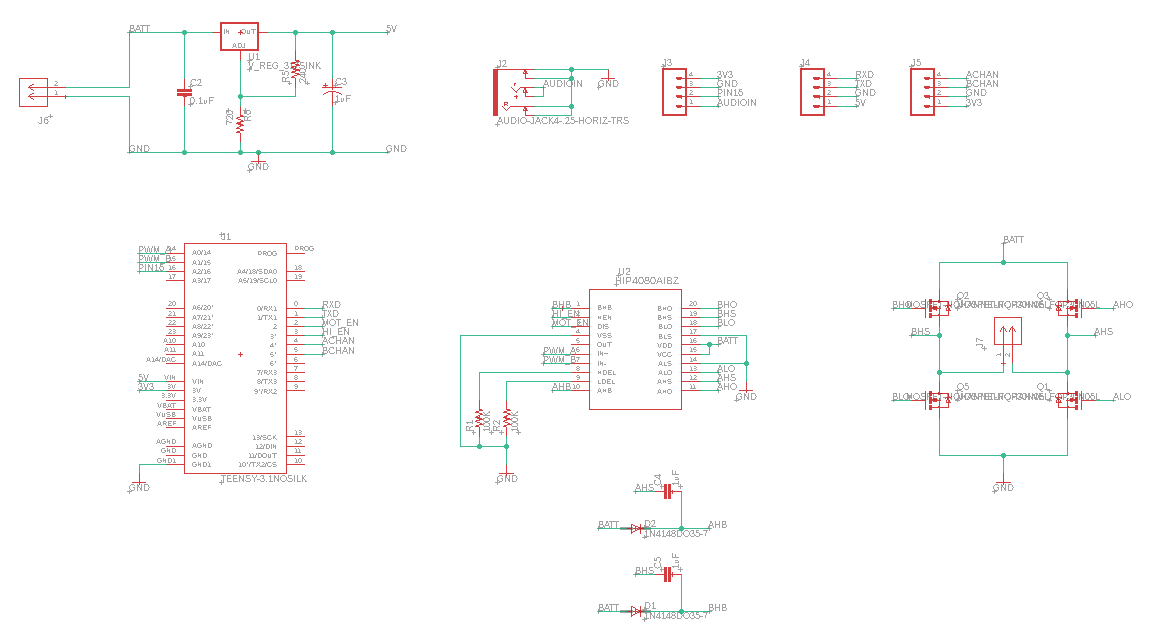 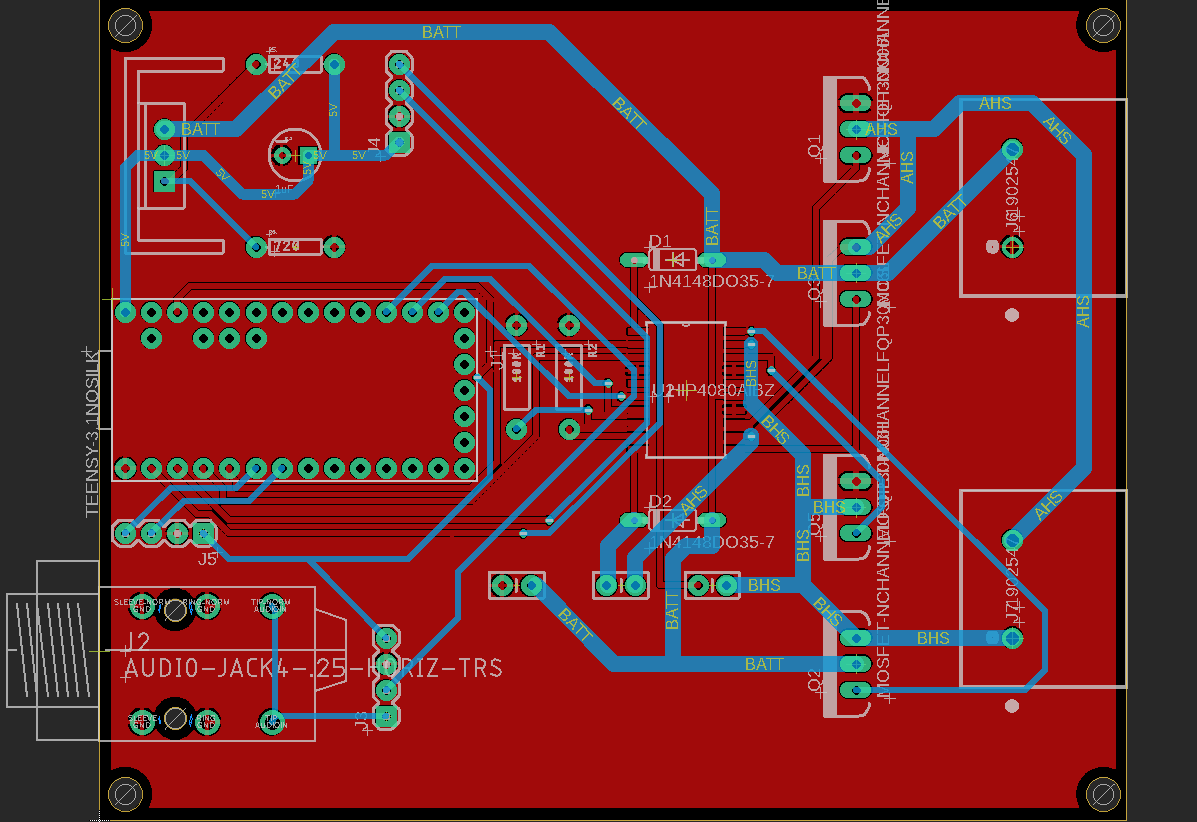 There are two glaring errors:-

You should move C2 as close as possible to the regulator, and add larger low-ESR capacitors (totaling several hundred μF) directly across the battery input and close to the FETs.

Move the BATT trace from between D1 and D2 to the right-hand side of the FETs so it takes a shorter path and can be made thicker. Give priority to it and route signal wires around it or across it on the other side of the board.

Another possible issue is that some of the FET Gate drive traces are quite long. If you can't move the FETs closer to the driver IC then add some series resistance (eg. 50 Ω) to suppress ringing.

Landon, I'm sorry you've encountered this frustration. But if you are methodical and persistent, you can diagnose the problem, and learn a great deal in the process.

First: did you breadboard the circuit first? If that worked and the PCB doesn't, then it's a problem with your PCB layout and/or assembly. I find areas of concern in the PCB layout, where traces seem to come too close to pads or other traces.

It could also be an assembly problem -- just one open solder joint or short (the regulator feedback pin, for example) could result in an overvoltage being applied to the Teensy, which would cause it to run for a short while then die.

Not the answer you're looking for? Browse other questions tagged driver h-bridge teensy or ask your own question.

1
Stepper motor stalls at low frequencies. Why?
0
DRV8835 OCP false trip?
0
Circuit design recommendation to prevent a failing regulator
0
IR2110 incorrect output waveform from input waveform
0
Feedback sought on audio output circuit for Teensy 3.2
1
PNP wont turn off
0
What PWM inputs are needed to drive a 3 phase BLDC using the HIP4086 IC driver chip?
2
Why this H-bridge with only N-channel FETs didn't work?
5
Why does my MIC4605 keep blowing up?