Row signal is something like pulse-A, width is 40nsec.

When I input this signal to preamplifier, output is something like pulse-B.
I would like to calibrate response of my electronics by injecting pulse from a pulser,

But, depending on pulse width, responce varies...
pulse-C shown in pic is the case width is set to be "1 usec".
If width set to be "100 nsec", which is similar to the row signal, the response gets very low...
Is this with pulse width of 100 nsec correct calibration?

what is correct pulse width for this kind of calibration??
Best regards! 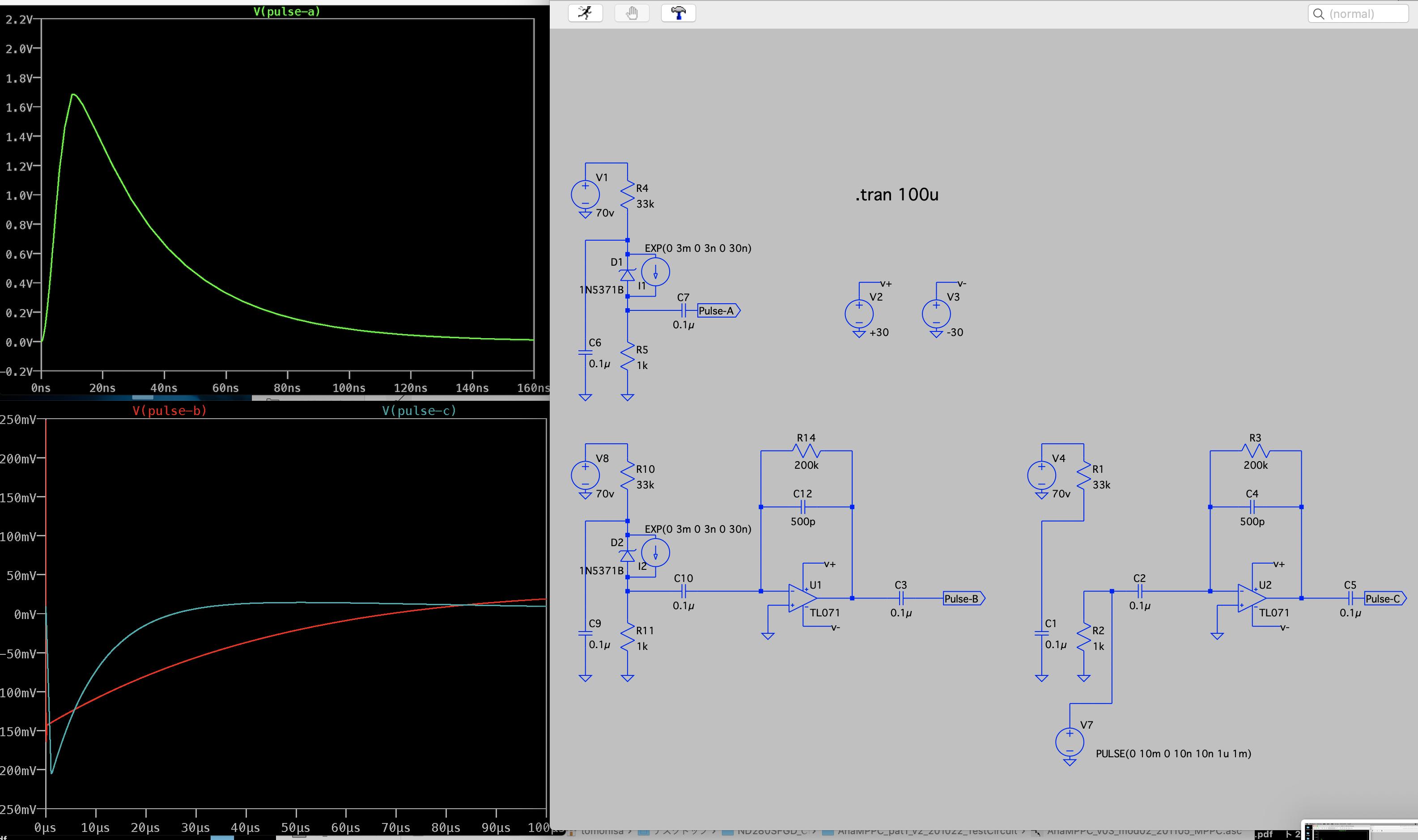 You have no "input pulse", V(pulse-a) is a complex waveform. How do you measure its width, its area? An impulse for measuring the impulse response is the delta function. Since it's a physical impossibility, approximations are used in the form of a very narrow pulse. In your case you have to test with something like pulse 0 1meg 0 1n 1n 999n (the area is unity). If the amplitude it too much, just use a unity amplitude, but still very narrow pulse compared to the simulation time: pulse 0 1 0 1n 1n 999n.

In this regard, the bottom right circuit is the one that resembles more a test circuit, provided you modify the source. But, are you really using those opamps with +/-30 V? And R2 across V7 is completely useless. If you want an input impedance then you have to make that a series resistance.

But, the top left circuit looks like it has C7 as a part of the whole. If that's intended, then measuring the output will be irrelevant without a terminating resistor. Add a 1meg...1g at the output, or whatever value you need for testing, otherwise there is no current through C7. The same goes for C3 and C5.

Here are the differences between the tests when your input pulse is used, when an impulse is used but without the input capacitance, and one which accounts for both the capacitance and output resistance of the impulse generator:

Out of these, only V(y) reflects the impulse response of the system, but that, too, will change with the values for the input resistance and capacitance, as V(z) shows. Which means C2 (like C5) are a part of the test circuit.

As for the "calibrating" part, no idea what are you talking about. Calibrate for what? First you design your preamplifier for a particular set of design choices: amplification, gain, bandwidth, SNR, etc. Then you'll know its transfer function, and that will give you the impulse response, which will give you the response of the whole stage to any input. The simulation is there to confirm, or tune your circuit. Is this what you meant when you said "calibration"? If so, then that "calibration" is nothing more than a confirmation of your design. Was this preamplifier meant to overshoot? Congratulations, it does. Was it supposed to have a settling time of less than 1 ms? Looks like that's about right. Whatever other goals need to be checked, check them against your design, not some made up vague idea that causes you to not know your goal(s). That is, first impose the goals, then follow them, then verify them. Otherwise it sounds similar to "do I have enough butter on the bread, or should I add more?".