What should be the Vout for a CM-driven amplifier?

I am somewhat confused by what should be the amplifier output voltage after a purely CM signal is fed. Let me it clarify what I'm talking about: 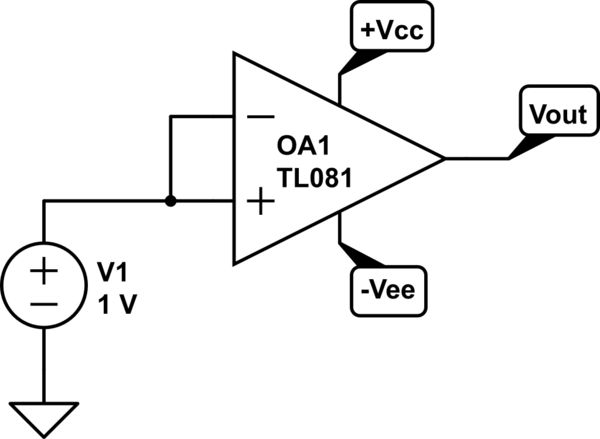 However, I'm rather told one should expect a midrange output wrt supply rails, from a design standpoint. Thus, if say the amplifier is railed from +3V to 0V then I should expect \$V_{out}=1.5V\$. This criteria actually leads to some design specs at the output stage, where one should size the transistors to have exactly the same current.

This standpoint eventually results in the same conclusion if supply rails are symmetric e.g. from +3V to -3V, but then I wouldn't expect a Vout = 0V for +3V and 0V, as Circuitlab says.

So, which one is correct? Or are we talking about the same thing?

Clarifications are due, I'm sorry. I do know a real amplifier will inevitabily be affected by a statistical offset voltage, likely leading to saturation close to rails depending on polarity. But that's not the point of the question.

My question is: if theoretically \$\mathbf {V_{OS}=0}\$, then, for high CMRR, should one expect Vout to be slightly above 0V (i.e. regardless of the opamp supply rails) or should one expect it to be at mid range i.e. close to \$(Vcc-|Vss|)/2\$? From the previous \$v_{out}\$ equation, I would say the former -- but I wouldn't know whether the output stage may be able to reach it without a negative rail (if for instance the opamp was powered with +3V and ground on the lower side).

With an open loop amplifier, with colossal gain, and finite but unknown input offsets, you should regard the output voltage as completely undefined.

If you take any real amplifier from your spares box and wire it up like that, it's more likely for the output to be saturated on one or other rail as it is to be in the linear region between them. That's what should be expected from a design standpoint.

With a simulated opamp, it depends what the model for the amplifier does. If it is is given precisely 0 V for the input offsets, and a very large CMRR, then you may get a mid rail output.

1
Can a digital pot and op-amp challenge the performance of a programmable gain amplifier
1
Confusion around common mode voltage
0
required wattage of chip resistors in audio opamp circuit?
0
Using built-in current limiting of an OpAmp to create a current source
0
Supply Voltages for Inverting Amplifier
1
Why is a Instrumentation Amplifier Necessary for A Wheatstone Bridge (small signal circuits)
4
Non-inverting op-amp saturating incorrectly
4
How does a common-emitter rail-to-rail opamp output stage work? Is there a discrete example?
0
Reasons for constraining single-ended Op-Amp VCC when multiple power rails available