How are logic gates created electronically?

So we have AND, NOT, NAND, NOR, OR gates, but how are they created electronically/electrically?

For example, what makes NOT gate reverse the value?

I've turned this into a community wiki so we can collect cool logic gate implementations to which to refer to in the future.

To start with you have to understand transistors in a simple way. I will deal with CMOS since 99% of all logic that has ever existed (in number count) exists as CMOS.

There are two kinds of transistors used, PMOS and NMOS, here are their symbols:

The transistors are electrically controlled current sources/sinks. The PMOS will source current (the dotted line in the diagram shows current flow when on) from a power supply (attached to source) through the drain and into other circuits when the Gate voltage is LOWER than the source. The NMOS will sink current into ground through the drain into the source (which in this case you should think of as a sink).

Please note that I've taken some liberties with naming for the sake of clarity. 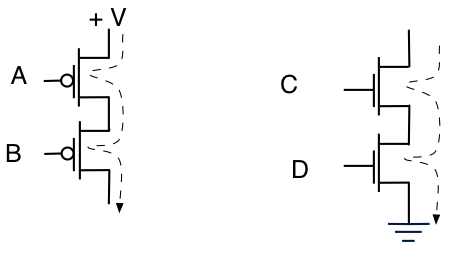 Just like you can "stack" (actually put in series), you can parallel devices.

You will notice that already we are using logic language to describe function (AND, OR) so now we can start piecing together circuits.

First off the Invertor: 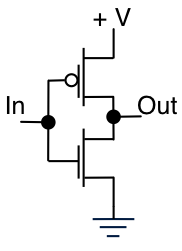 When Vin is at ground, the PMOS is turned on and can source current, but the NMOS is off and cannot sink current. As a result, the Vout pin tries to put charge onto any available capacitance and charges that capacitance up until it reaches the V+ level.

Likewise when the Vin is High, the NMOS is turned on and can sink current, but the PMOS is now off and cannot source current. as a result, the Vout pin tries to pull charge off of any available capacitance and discharges that capacitance until it reaches the Ground level.

If you look at the symbol for both the PMOS and the NMOS you'see that the gate looks like a capacitor on the symbol. This is deliberate as a MOS transistor IS a capacitor and it is mainly this capacitance that is charged and discharged during operation. Current is the flow of charge per time and capacitance is the storage of charge per voltage. Transistors turn gate voltage into controlled currents that then charge and discharge gate capacitances that turns that change in charge back into a change in voltage.

Now for the first two input gate the NAND gate: 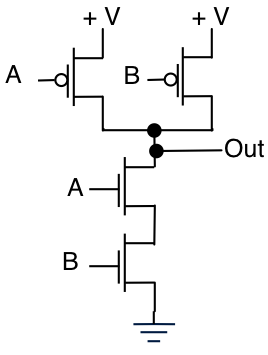 In all other conditions at least one of the PMOS will be sourcing current and the NMOS stack will not be able to sink current. The output is then charged up and Vout = high.

To turn into a AND gate you just need to invert the output. 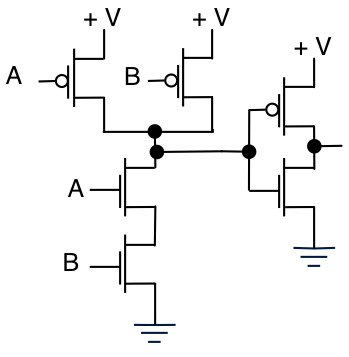 And it's truth table:

And next the NOR gate 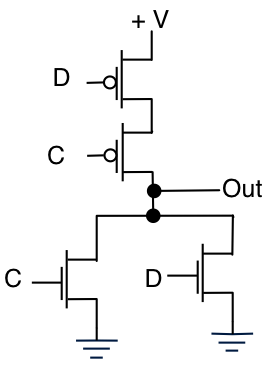 I hope by now you should be able to get the truth table yourself.

There is pleasing symmetry from NOR to NAND. the structure is a simple inversion. 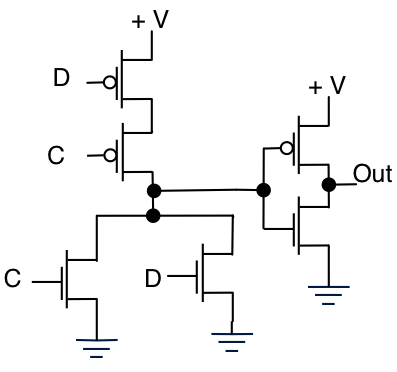 Extending the designs to higher order inputs is easy, as shown by a 3 input NAND. 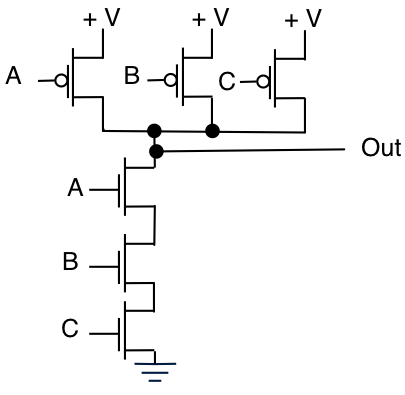 By placing NMOS and PMOS in series/parallel combinations you can implement various logic functions at a transistor level. This is often done for area efficiency, power efficiency or even for speed. These functions need not be strictly AND, OR or Xor functions. The following is known as as a AND/OR gate: 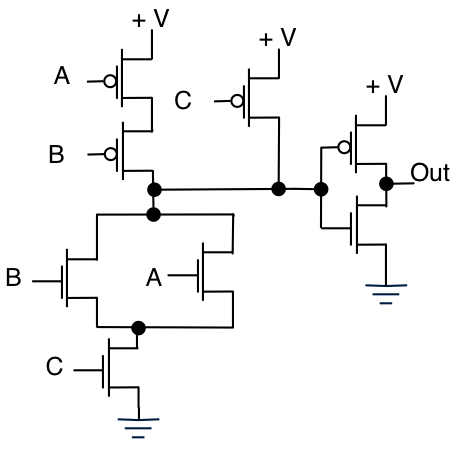 and has the following truth table.

Least you think that this is the only way to implement these functions, I'll introduce a device that is called the transmission gate.

Both the NMOS and PMOS gates must be driven in opposition to work properly.

Here is a sample circuit of what you can do with an additional NMOS. 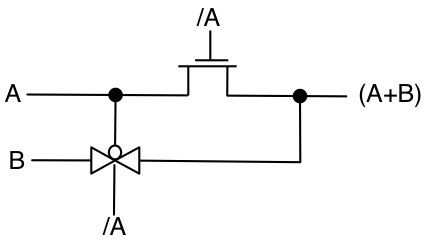 So you can see that only using 3 transistors you can implement A OR B. BE warned though that this circuit has serious side effects and is not generally used. But it is illustrative nevertheless.

here is a whole collection of TG based logic functions: 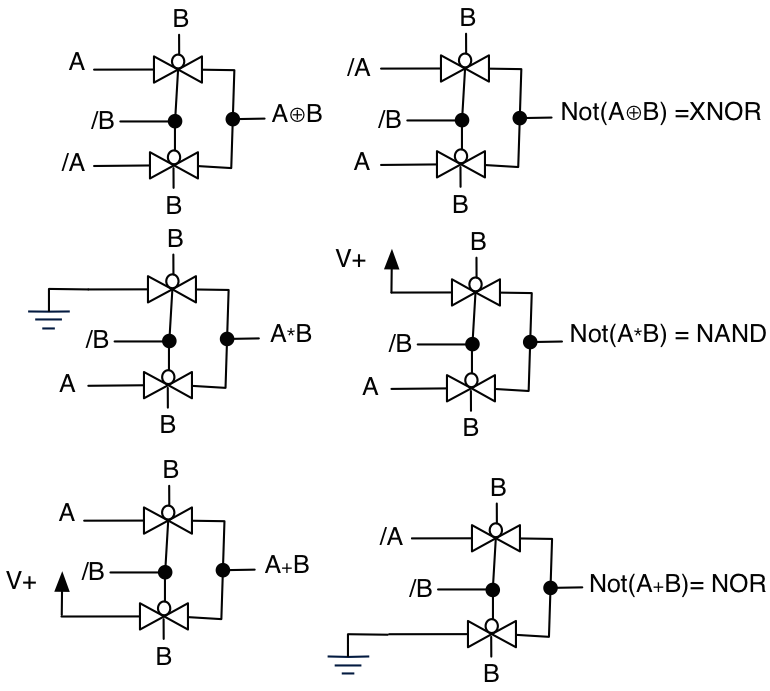 There is also Pass-Transistor-Logic or PTL. An example of such: 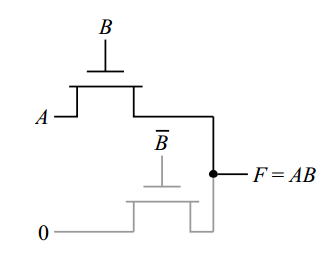 The NOT gate in particular in CMOS consists of complementary PMOS and NMOS devices that are configured to invert the output.

Best advice I can give you is to look at the book Digital Integrated Circuits. It has everything you want to know about how to design logic at the transistor level.

Also, some gates are made by combining gates. For example, an XOR is an (OR) AND (NOT AND). Also, a NAND is just an inverted AND. 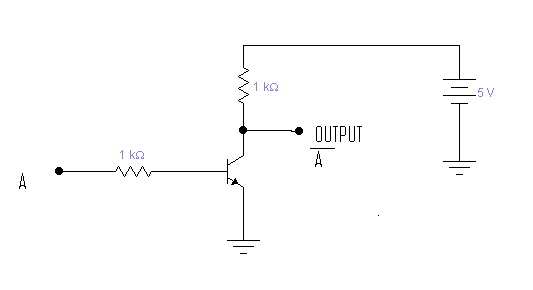 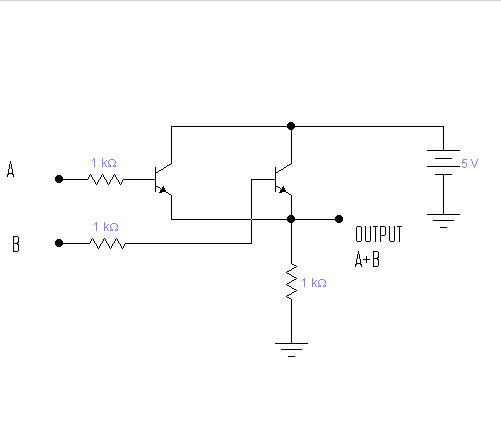 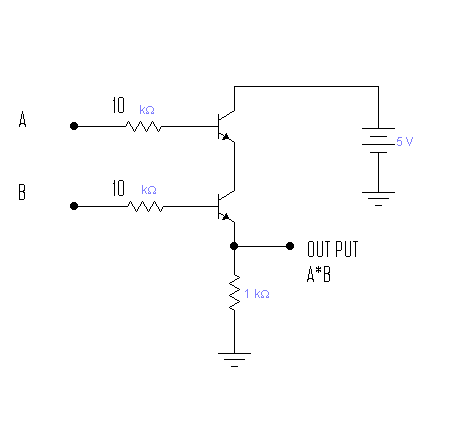 You probably will understand it better if you have visual representation of what happen in logic gates. One of best place for this is this excellent interactive simulator falstad. It is java based and run from your browser.

4
XOR gate; transistor level design
2
Create a CMOS circuit from a logic function
6
How to find Setup time and hold time for D flip flop?
2
More Energy Efficient 1 or 0
5
What is wrong with this XOR gate built with four transistors?
1
2 Transistor XOR Cell Floating Output Problem
2
How to construct CMOS equivalent of an XNOR gate using AND, OR, NOT gates?
1
What drives an input from 0 to 1 inside of a digital circuit?
1
What device controls whether a signal is high or low

3
What is the minimum number of NOR gates needed to implement a 2-input multiplexer?
0
Exotic logic gate
5
How to minimize the gates in implementation?
1
Logic gates and logic circuits
0
How to get equivalent behaviour of NOR and Nand gates, by making changes on the input side, when their inputs are attached
0
Why aren't cascaded NOT gates used as frequently as flipflops?
6
How many transistors are there in a logic gate?