How to troubleshoot a DRV8833 motor driver module problem?

I am trying to control a DC Motor with a DRV8833. To be precise, I have this module from MJKDZ (which, I believe, is not the original one from TI).

Every output pin has 0V (including "ULT", which may indicate a fault condition). All grounds (ESP32, battery, etc) are connected.

I am wondering how I can "debug" what's going wrong.

Do you think I may have overheated it while soldering the pin sockets (I learned soldering when I was a kid from my father probably like many of you, but I didn't do it for a while and now I am terrible at it)? Or could it be an over-current issue?

So, just to be sure that the issue is really on this particular module, could I try connecting an even simpler circuit like this (basically excluding things related to ESP32):

and expect the potential difference between OUT1 and OUT2 to be 5 V ?

@brhans you are right, it was the EEP pin. On this image I thought the jumper not been soldered, letting EEP unconnected would enable the device, but it was the opposite.

How to debug my DRV8833 motor driver module? 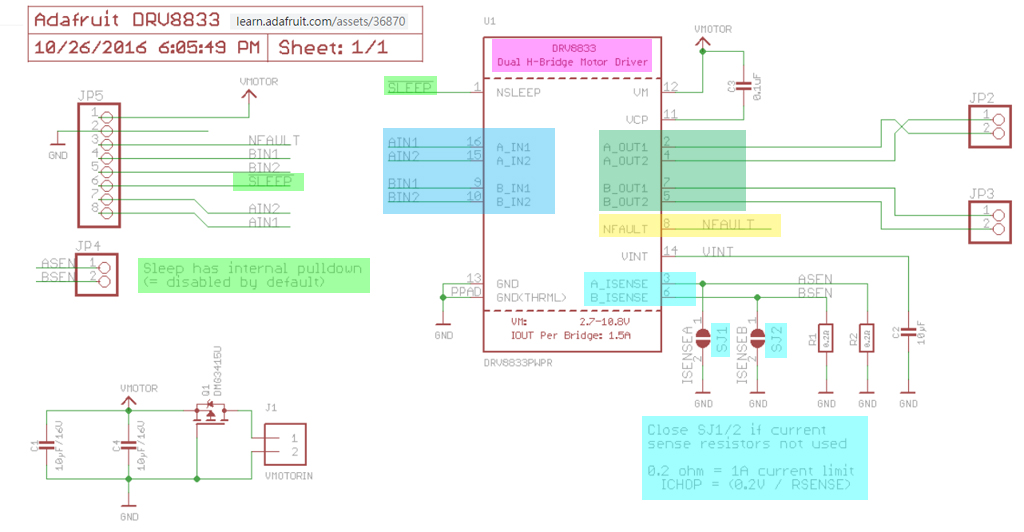 The OP has confirmed that he forgot to enable the DRV8833 by shorting the EEP (Sleep) jumper cap, therefore causing all zero's at output pins. I hope to make a follow up remark later, including a reminder for future readers and DRV8833 newbies.

I just read that some DRV8833 output signal pins should not be connected to ground, or damage would arise:

I need to verify this later.

(1.0) This is a interactive/live answer in Agile (sort of chatting over) software engineering system development methodology style, to solve a debugging/troubleshooting problem.

The OP and all readers are welcome to interrupt this not yet completed answer any time to ask questions to clarify things, suggest ways to improve the answer, and point out any mistakes.

(1.1) To debug the motor driver, first thing first to read the following:

(a) Product sheet of the assembled breakout module to get a rough idea of the power requirements and function of the pin outs (which might be different from the chip datasheet.

(b) Datasheet of the chip, to get a rough idea of what external components are used to assemble the module.

(c) Schematic of the module.

To make the OP's question more specific, (a) to (c) above is appended to his question.

The OP seems to be a newbie in motor driver DRV8833. He might also not that experienced in using WiFi controller ESP32 to do testing and debugging. So I will try to explain my suggested troubleshooting procedure as simple as possible.

I will start without using ESP32, and do a manual testing, to make sure the module can output something, and not as the OP was worrying, overheating and fried the module while soldering the module pins.

I will also start troubleshooting without using any motor, because even though DRV8833 has flyback protection diodes to absorb any huge back EMF voltage/current spikes when the inductive coils of the motor is switched off.

(a) Put away ESP32 and motors. We will just use jumper connecting wires and connect by hand to Vcc or Ground as input driving signals to the DRV8833 module.

(b) For the output side, connect a 1kΩ resistor with a LED across the terminals +, - (Bout1, Bout2, as indicated in the following Adafruit DRV8833 schematic) originally for output to drive Motor A.

(c) Now the input side. We will just entertain Motor A, and forget Motor B, and the current sensing inputs ASENSE, BSENSE. So, we will will use 5 jumper connecting wires AIN1, AIN2, SLP (Sleep), FLT (Fault) and GND (Ground). Of course we also need to connect the motor power VM.

(d) I read Lada Ada in her DRV8833 overview that the other motor driver Toshiba TB6612FNG is very similar and have identical pin outs. So it is a good idea to test both drivers at the same time, comparing and contrasting for easy pairing/swapping troubleshooting. More details about TB1162FNG can be found in Ref (4) below.

Spin two DC motors or step one bi-polar or uni-polar stepper with up to 1.2A per channel using the DRV8833. 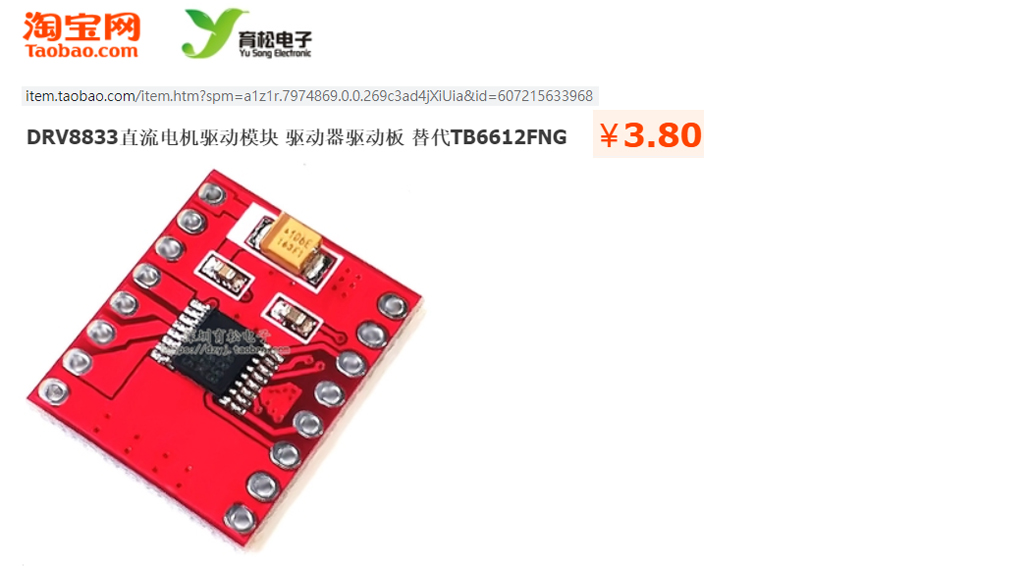 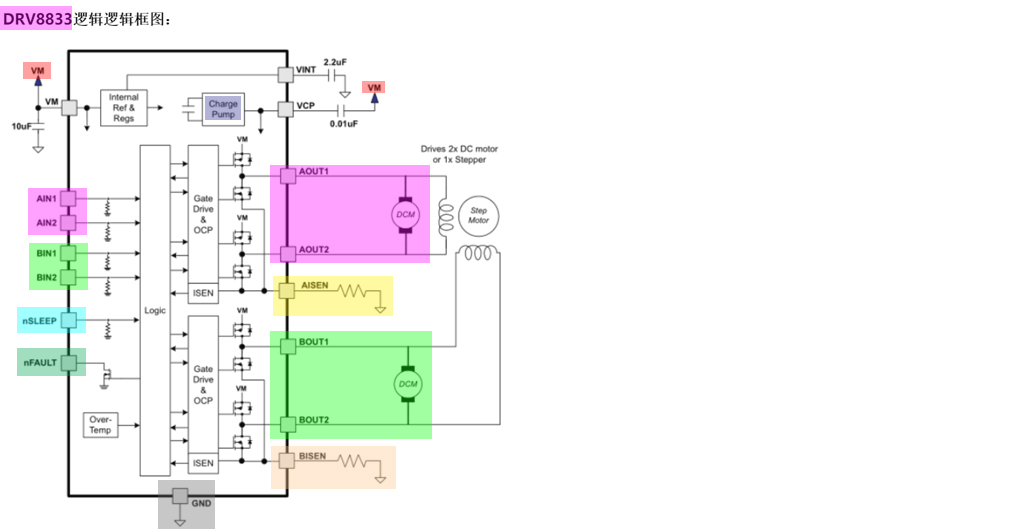 I found that the DRV8833 module does not have any input pins for PWM speed control, like L298N and TB6612FNG.

Though DRV8833 has other pins such as Sleep, Fault, Current Sense, which should be useful for battery operated, mobile applications. However, these features are not useful my smart home applications,

So I am now testing TB6612FNG first, and only after testing OK PWM control, would go back to DRV8833 without PWM, or DRV8871 with PWM interface.

Crank up your robotics with powerful Adafruit DRV8871 motor driver breakout board. This motor driver has a lot of great specs that make it useful for a wide variety of mechatronics. In particular, the simple resistor-set current limiting and auto-magic PWM support make it super easy to use with almost any brushed DC motor.

Using it is super simple. Connect your motor to the OUT terminal block. Power the board with 6.5-45VDC power on VMotor and provide the H-bridge input control on IN1 and IN2. You can even PWM the inputs and the driver chip will do the right thing.

You can set the current limiting with an external resistor Rlim. We solder in a 30K resistor by default for a ~2A current limit, however you can remove this resistor and/or solder a resistor over it to change the resistance and change the limit. - Lady Ada

The OP has confirmed that he forgot to enable the DRV8833 by shorting the jumper.

(This remark is out of date) I still have not received the OP's confirmation on the details of his hardware and software configuration. In the mean time, I found another question on DRV8871, so I am now diverting to DRV8871, and would come back when the OP replies.

Not the answer you're looking for? Browse other questions tagged motor-controller or ask your own question.