Can I use offline UPS for a PC? Will the delay affect my PC if it is running when the power goes out?

is an interesting conversation on the subject and opinions are expressed about european regulations for ATX design specifying that it should cope with full load for half of a cycle or 10ms of power loss.

i am specifically interested in offline UPS compatibility and not concerned with other benifits of other UPS tolologies.

please advidse if i need to repost this elsewhere.

The requirement is in the ATX power supply specifications.

The supply is required to handle AC power loss of at least 16ms.

A low-cost offline UPS design is based on the fact that the load has sufficient capacitance to continue operating for a brief moment during a power interruption event, before the backup power is switched on.

For starter, I just did an experiment with my own offline UPS. Channel 2 (blue) is the AC input, channel 1 (orange) is the UPS output, both are 100x probes. The external trigger is a remote control signal. 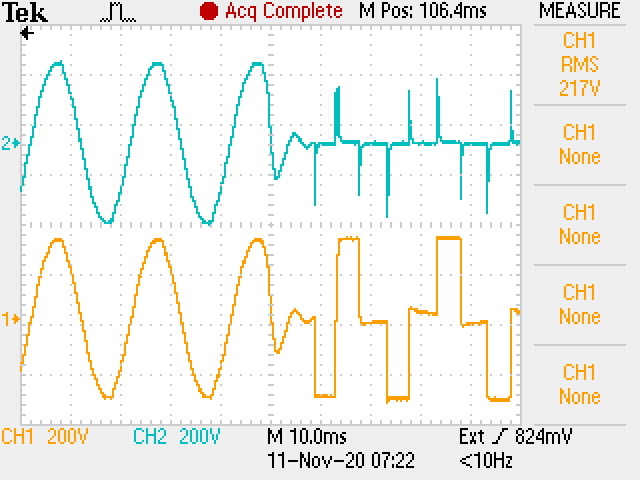 As you see, AC power is interrupted at the center of the graph, immediately, the AC power starts returning to 0 V. The interruption is not instantaneous due to the capacitance of the load. After approximately 10 ms, the UPS's modified square wave backup power kicked in as expected (Ignore the glitches from the now disconnected Channel 2, they are common-mode noise from the UPS due to my measurement setup).

Then I measured the exact transfer time of my UPS. 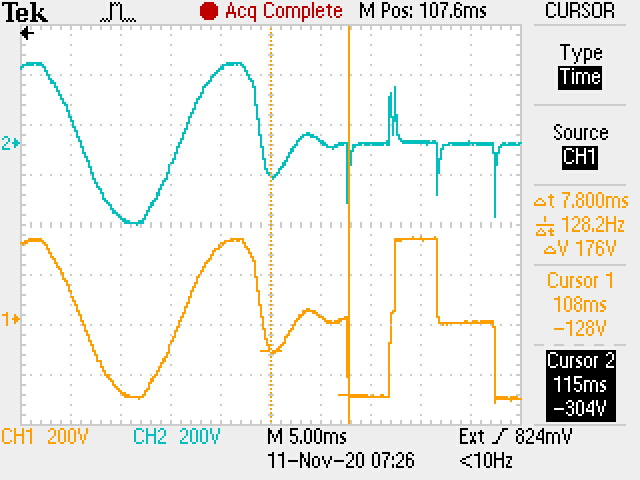 It's approximately 7.8 ms for this single switch-over (it may vary depending on the specific location of the power interruption on the AC cycle). Because the transfer time is sufficiently fast, within half a cycle of the 50 Hz mains voltage, there is no interruption to the load on the UPS. The fact that my oscilloscope is still running is the proof.

But the real question is: how fast is fast enough? Since most UPS units are designed to power personal computers, thus, they are usually designed to meet or exceeded the ATX specification.

In Desktop Platform Form Factors Power Supply - Design Guide (a.k.a. The "ATX" spec) by Intel, page 20 and 21, the required hold-up time after a power interruption is specified. 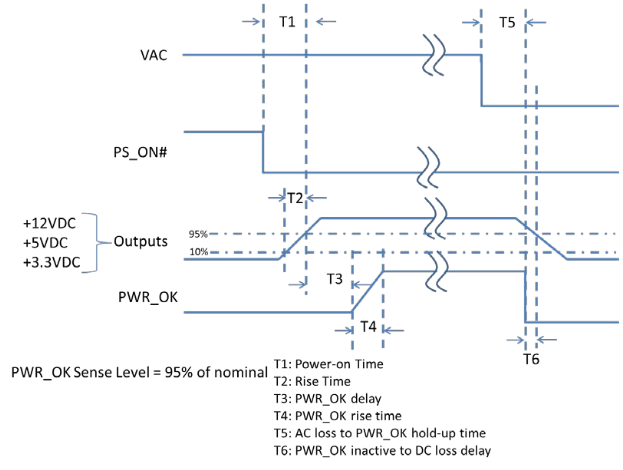 To rephrase it, when the AC line voltage is interrupted, the +12 V, +5 V, and +3.3 V output rails start to fall. For a properly designed, ATX-compliant power supply, the power supply should hold up for at least 16 ms before the PWR_OK (a.k.a the well-known Power Good) signal becomes LOW, telling the motherboard that it has failed. Furthermore, even after PWR_OK becomes LOW, it's also required that all output voltage rails continue to hold up for at least 1 milliseconds before they has fallen below the 95% threshold of their nominal output voltages.

Here's some actual oscilloscope screenshots showing the response of a consumer-grade 650 W ATX power supply after the loss of AC input under full load. 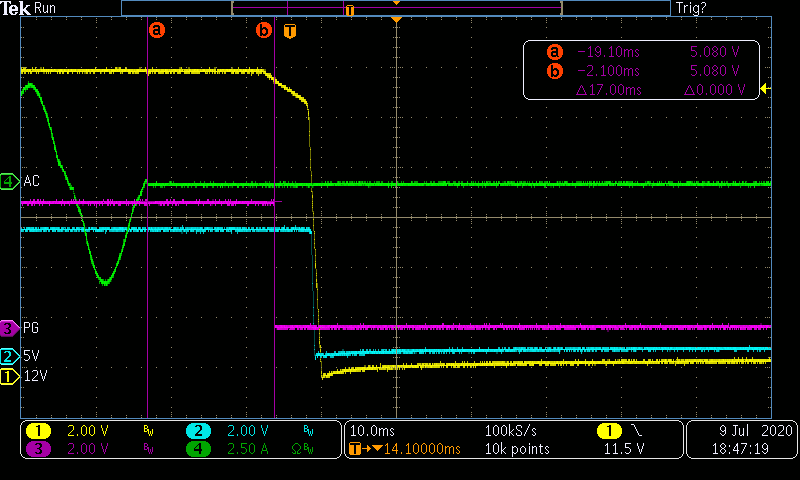 Source: fcpowerup.com, fair use. Note: this is a cool Chinese PC review website which conducts independent verification of consumer PSUs according to the full ATX specs.

Using the ATX standard as the guideline, offline UPS units are designed to have a transfer time below 16 ms to ensure the proper operation of personal computers. For example, this is the specification of an offline UPS from APC. 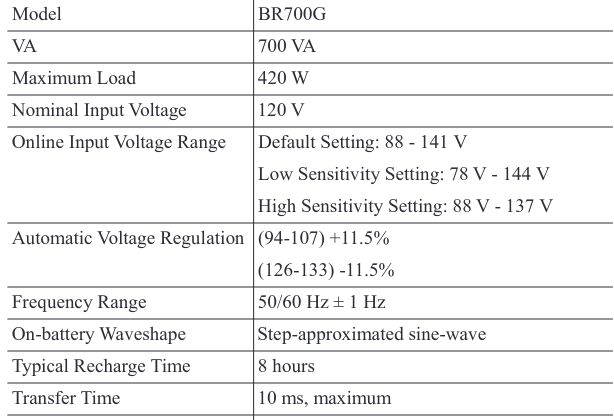 Note that the specified maximum transfer time is 10 ms, well below the hold-up time for an ATX power supply.

Thus, given a UPS that works as advertised and a personal computer with a standard-compliant ATX power supply, an offline UPS is perfectly compatible with a PC. Anecdotally, I've personal used them for a decade without experiencing any problem during a switch-over.

However, non-compliant hardware (including both UPS and PSU units) can occasionally be found, and theoretically, an old power supply can become in-compliant as well due to the loss of capacitance in electrolytic capacitors. Finally, although the manufacturers probably tested them on most consumer electronics with confidence, but ultimately there is no guarantee that an offline UPS will always work for all types of electronic devices, which is why an "online" UPS with sine wave output is advantageous.

Not the answer you're looking for? Browse other questions tagged power-supply ups atx regulations or ask your own question.

-3
Can I use offline UPS for a PC? Will the delay affect my PC if it is running when the power goes out?