I wanted to play around with some of these addressable LED strips, so I bought one off Amazon. It's a string of 300 LEDs, comes in a big spool: 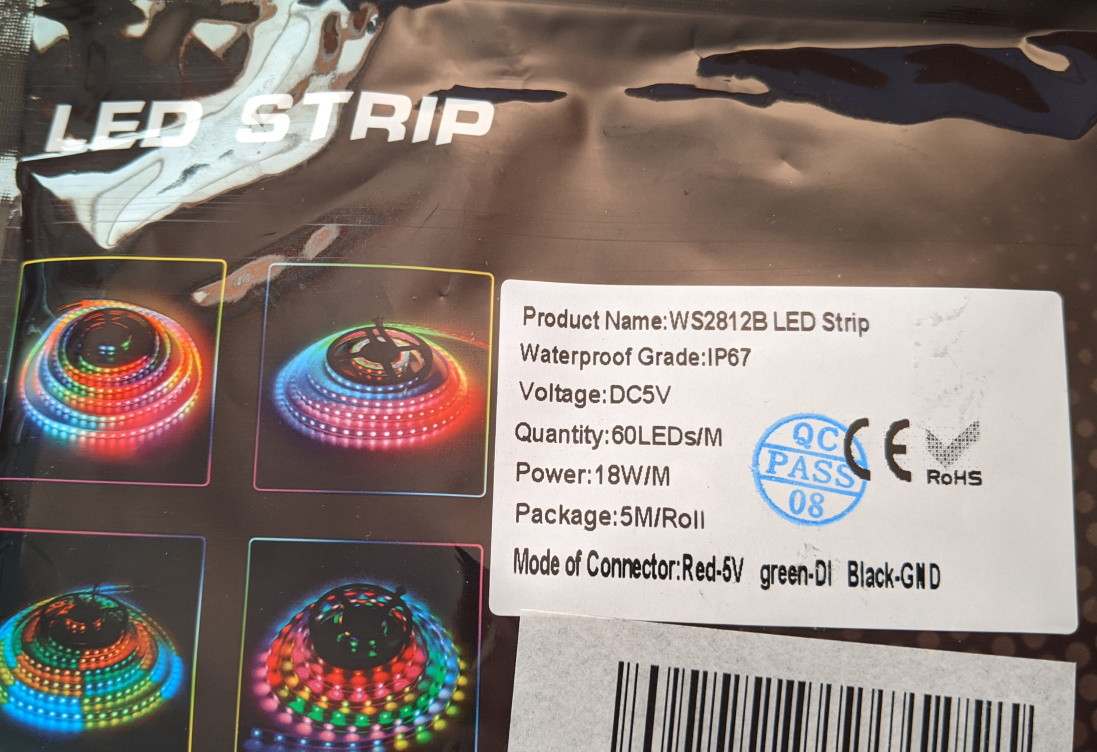 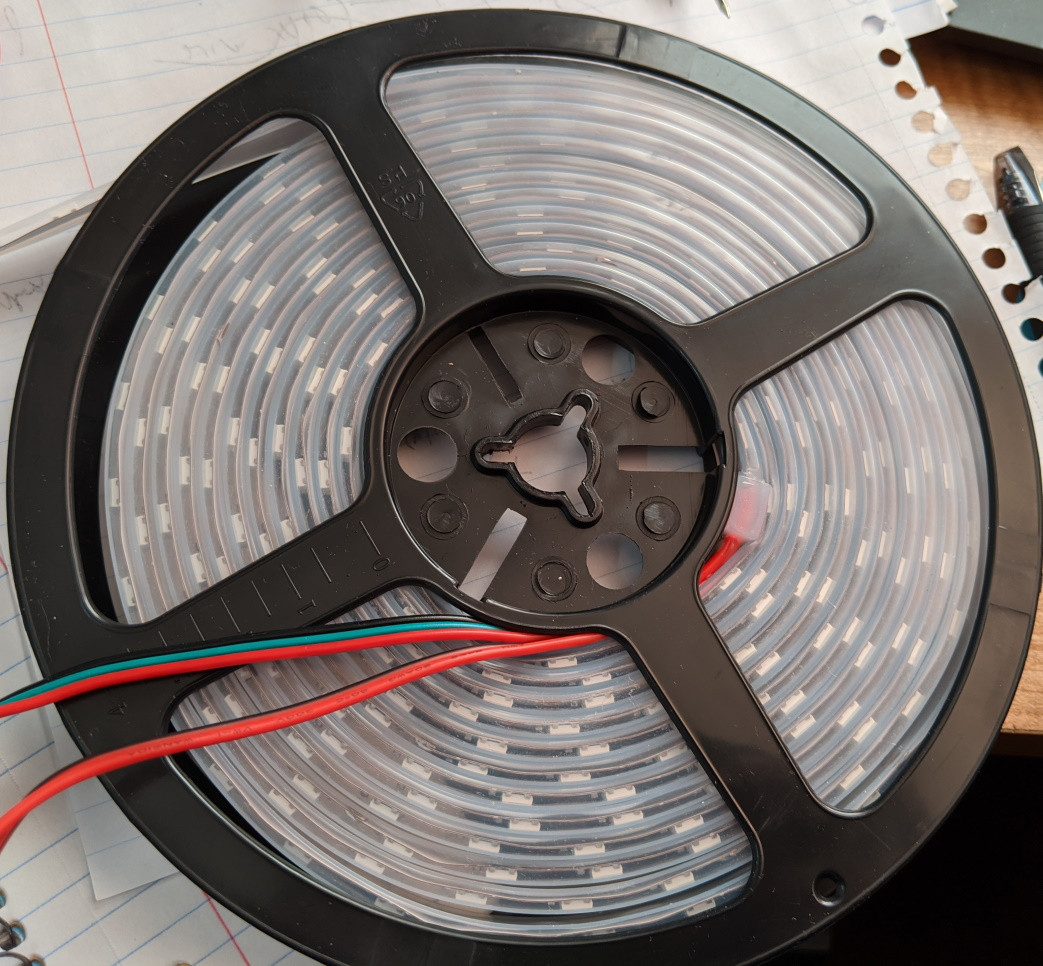 The spool has the same connectors on both ends, a 3-prong that has power and control, and a 2-wire power: 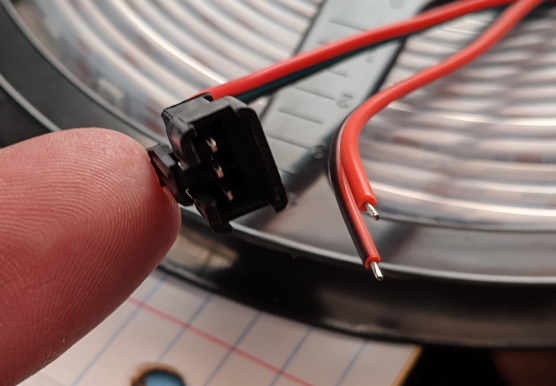 I also got their controller - the SP501E. It seemed like it was relatively popular, and figured I would play with it for a while and then get an Arduino or Raspberry PI and do my own thing: 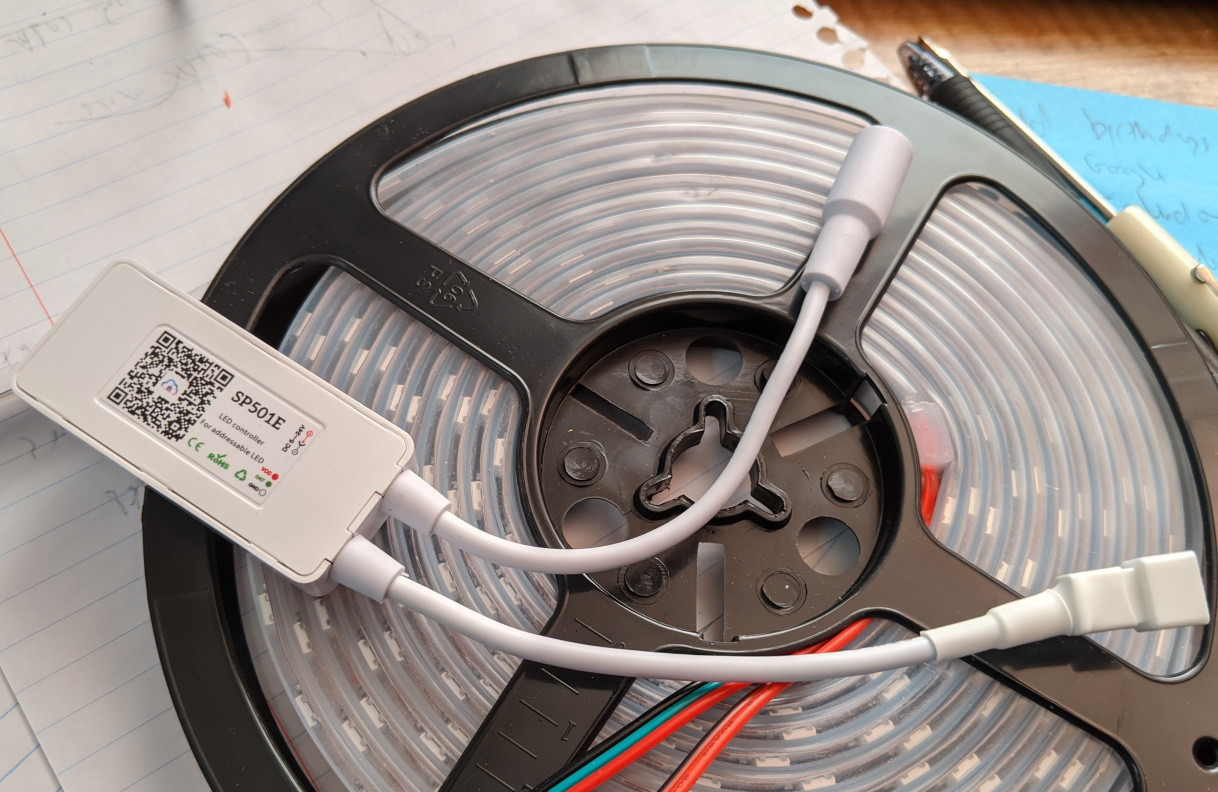 The controller said it accepted 5-24V so I found a 12V adapter in the basement that had a plug of the right size. I plugged it into the controller, plugged the controller into the LED strip using the 3-pin connector (leaving the bare wires dangling) and ... the LEDs lit up, not very enthusiastically and only about 1/3 of the way down the spool. And although the minimal instructions said "Pressing and hold the button on the controller untill the LED flashes in white", I sat there holding that *!&% button for a couple of minutes and never got the white flashing.

These sounded like they could all by symptoms of insufficient power, so I decided to get a beefier power supply. The package said 18 W/m, and the spool is 5m long, and it's running at 5V, that sounded like 18A to me. I ended up ordering the Alitove 5V 60A Power Supply which is probably a little scanty if I end up with 3 strings of lights. Who knows.

In any case, it comes with really no instructions, luckily they did include a picture on the web site of the connections: 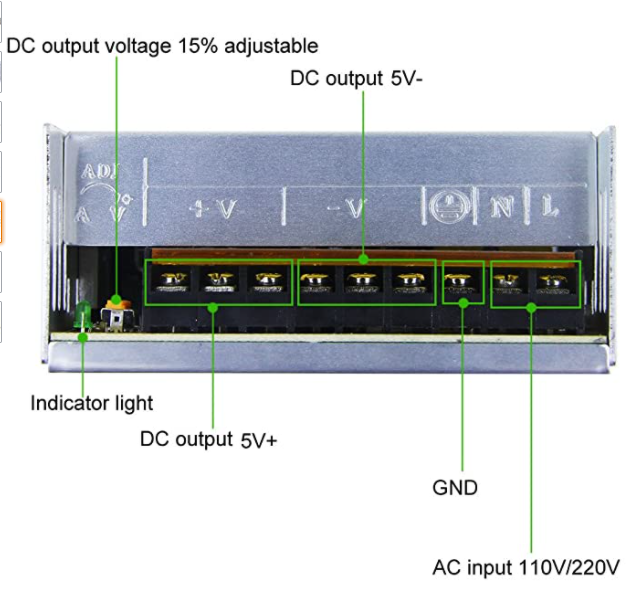 So back to the basement I go. I found an old power cord I could snip the end off and wire into the PSU, and sure enough I got a nice 5V out between +V and -V: 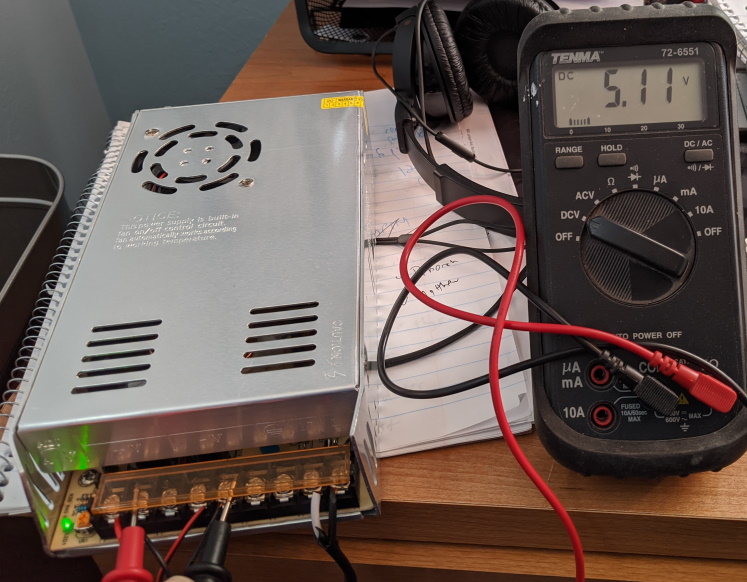 There's a variable resistor to control the output, so I'm sure I could tweak it down to exactly 5.0V.

But now I ran a question due to lack of documentation. As I mentioned before, The LED spool has 2 connections - a 3-pin and 2-wires - and the controller plugs into the 3-pin, which leaves me with the 2 wires sticking out from the LED spool and the power connector for the controller. I'm not really sure what I need to do here.

So I performed surgery on my 12V power adapter, cutting off the power block itself, just leaving the wire and the plug. I then wired it into my 5V power supply, with ground on the outside of the plug: 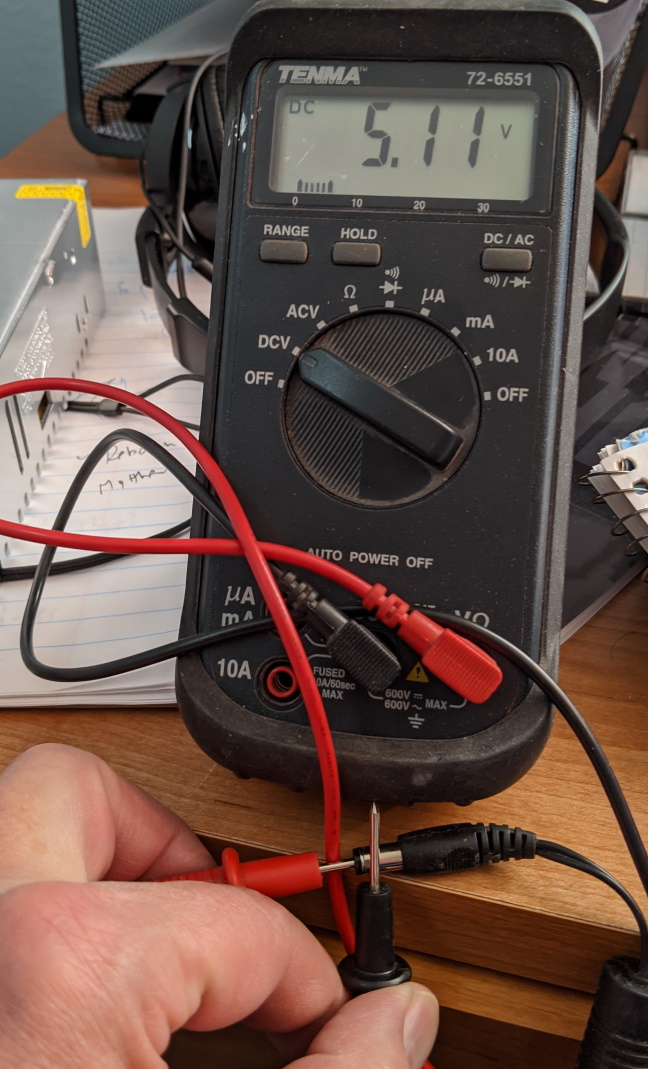 So now I've got the same 5V supply feeding the LED strip directly, and the controller via its power jack.

That all seemed reasonable - a good amount of amperage available on my 5V supply, same 5V running into controller and LED spool, ready for liftoff. 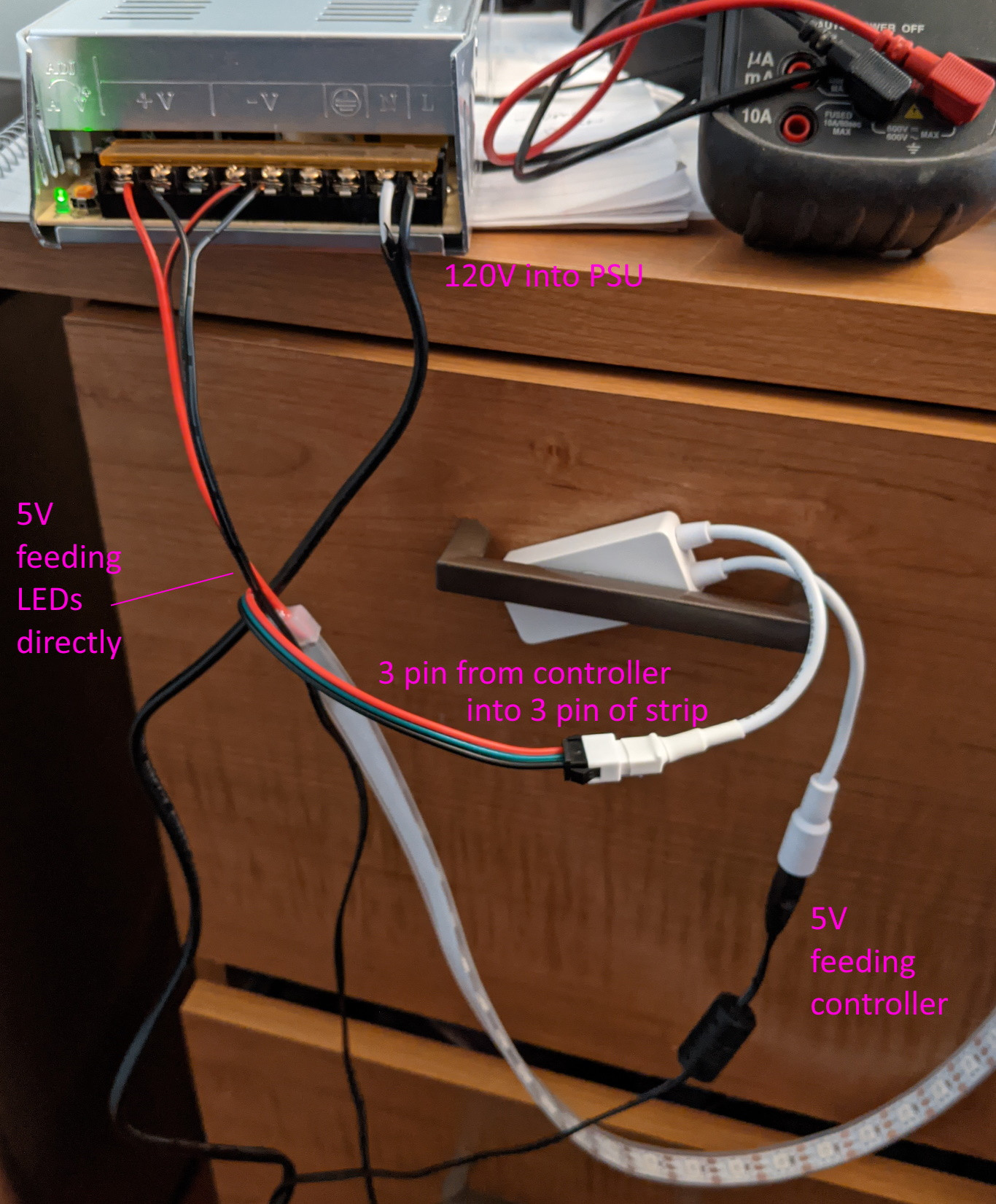 The first time I try this, a few LEDs on the spool shine green - a nice solid color, power looks good - but holding the button on the controller does nothing.

The next time I try this, the LED spool ignores me completely. Totally dark. I am still getting 5V from the PSU.

Where did I go wrong?

I used the same strip and looks good. Few things you should keep in mind. Each chip with LED consume on max current 60 mA. But so big current cannot pass via ribbon. At least connect power 5V from both sides. Even somethere in the middle,if you plans to use it close to maximum. Minimum consumption one chip less then 1mA. Two plugs, second for connecting next string. The first plug to connect controller find by marking on ribbon. Green wire to DIN. Power you may connect any side. About controller, I didn't deal. Just used PIC MC

Not the answer you're looking for? Browse other questions tagged led led-strip 5v or ask your own question.