What is the green/red drag line in Altium?

When I drag a component in Altium there is always a line (sometimes it's red, sometimes it's green) connected in the center of the part and pointing to some place in the PCB. I always wonder what is this line for anyways? 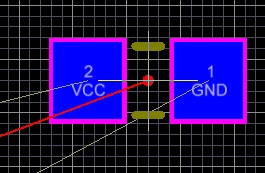 I asked the Altium support if there is either a way do disable this feature or to get a detailed description to understand what it does.

This is loosely translated from the German response:

If you are seeing green/red lines when placing components in the PCB document, this can be interpreted as follows: It is a kind of feedback from Altium Designer regarding the length and position of the connecting lines. Red lines indicate, that there is still a better position available with respect to intersections and connection length. Should the line show green, then this is an indication that the length of the connecting lines is well matched.

I am not really satisfied with that response but I could just disable .... oh wait.

However, there currently is no way to turn off this mode during placement.

Well, at least its a great example of implementing a feature that no-one needs because its not even documented how it works :)

It turns out that this feature (Optimal Placement Vector, or OPC) is documented in the tutorial (http://techdocs.altium.com/display/ADOH/Tutorial+-+Getting+Started+with+PCB+Design) Here's what it says. As you move a component around in the workspace, a thick green or red line will be displayed, traveling from a point within the component, to a location on the board. This line is called the Optimal Placement Vector, its function is to give an indication of whether the new location is better (green) or worse (red) than the previous location.

The vector has two distinct properties: its proposed target location; and its color.

The Optimal Placement Vector is drawn between these 2 centroids, with the component end highlighted by a dot. Because it is a relative indicator, when you first click to start moving a component the vector is always drawn in green. The 2 centroids are continuously re-calculated as you move the component, because the connection lines can move from one pad to another as they are automatically re-optimized to maintain the applicable net topology for the moving component. Because of this net re-optimization, the target end of the OPV can jump around as the component is moved. If the centroids move apart and the OPV becomes longer, it may change to red. If the centroids move closer together and the OPV becomes shorter, it may change to green.

Ok, the line seems to be showing the mid-point between each end of the two net-lines, at least when dragging a two-pin device.

It seems to be part of the "Dynamic Reconnector", a term which does not appear at all even in the altium docs.

In any event, if you press N while actively dragging a component, it stops following the component around. However, you also loose the live net-lines.

I think the only way you're going to get more information is either wait for altium to document this feature, or contact them directly.

It is some feature that is supposed to show you optimal routing based on component position. Like, when you put rotate a component one way, and it turns green, that's supposed to be the best position for that component. It is mostly BS, IMHO.

1
How can I put dimension relative to component center in Altium Designer?
3
Altium Schematics: what does Locked function mean?
4
Altium doesn't let me place components the way I want
1
Altium: Place a component “inside” some other component
3
Altium Designer - How to Remove Green X's (Error Markers)
0
Altium: multiple component footprints for the same component on the PCB
0
When placing a new line it doesn't get assigned a net, how to fix it in Altium?
1
How do I change the dimensions of a PCB in Altium Designer 19.1 using by entering the value I want the dimension to be?
0
What do these red crosses mean
2
What is this checkered pattern in altium when placing tracks?