How do you use an op-amp as a switch?

As part of our lab' design project, we have to calculate suitable resistance values for this circuit below and for others like it with different sensor resistances. However, in lectures we have never seen an op-amp being used as it is here, presumably as some sort of switch.

I have no idea how to start tackling this circuit as all the information we've been given is the typical resistances for the sensors. In this case, the thermistor will be 1 kOhms at 80 C and 4 kOhms at 20 C. This circuit must turn on the LED on the right when the temperature is high.

Another question, rather than asking how the circuit is works, is: how should I connect components for simulation in LTspice? Should the trailing end of the LED be connected to ground? And, since LTspice doesn't allow voltage rails, should the voltage source's negative terminal be connected to the ground at the bottom? 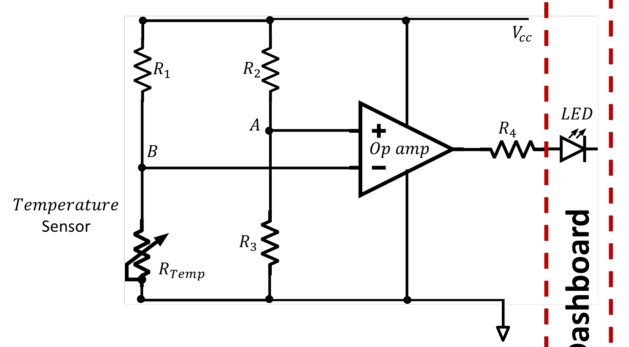 Thanks for any help and sorry for any dumb questions, I'm just first year. The online pre-recorded lectures aren't the ideal learning environment and our tutors won't respond to any emails.

In your lectures, you should have been introduced to the basic equation for an ideal op amp: Vout = G (V+ - V-). Where G is very large, like on the order of a million or so for modern op amps.

When V+ is one millivolt more than V-, the output will attempt to go to +1000 volts. Since the op amp cannot produce an output greater than its positive supply voltage, that will be what it does instead.

Note that this assumes that the op amp is what's called a rail-to-rail output amp. You should be aware that many op amps, especially older models like 741s, 356s, TL081/82/84, etc, will not be able to drive closer to the power supply lines than about 3 volts, which may affect a given circuit.

A starting point would be to decide at what value of RTemp you want it to switch (maybe 2K). Then set R1, R2 and R3 all to that value.

R4 is the current limiting resistor for the LED and should be set to allow a few milliamps through. Yes, the negative terminal of the LED will need to be grounded for anything to happen.

Not the answer you're looking for? Browse other questions tagged operational-amplifier dc thermistor or ask your own question.

1
How to change an LED with a thermistor
1
Can I simulate the temperature response of one thermistor by a different thermistor
5
Safely detecting presence of 12v applied via exposed terminals for use with microcontroller
1
Cutting off AC current to motor with thermistor
1
Isolated thermistor measurement
2
Using 3.3V or 2.5V for ADC and powering Op Amp from 3.3V or 5V
7
Trying to get (more) accurate readings from thermistor (electronics, math, and code inside)
0
Need help with circuit design
0
Surface mount thermistor practices