How can I use the voltage generated from inductive kickback?

I'm designing a circuit that requires a high voltage pulse in order to fire a spark plug. I'm thinking of using an inductor to provide this pulse (via inductive kickback), but I'm struggling to figure out how to actually make it work without destroying my power supply.

I understand that spark plugs in a car are fired in a similar way using an ignition coil (which is actually like a transformer, so the high voltage side is isolated from the low voltage side). However, I haven't been able to figure out how the battery is protected from the massive voltage spike. From what I can tell, a flyback diode on the primary also prevents spikes on the secondary, so it seems near impossible to actually get a spike. 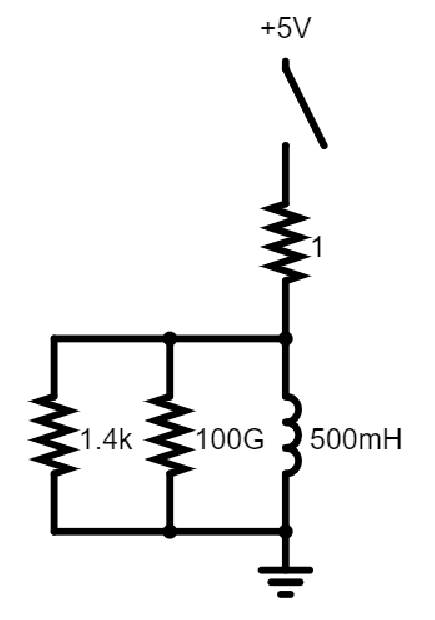 I'm simulating the spark plug as a high resistance (100GOhm) element. The 1.4 kOhm resistor is being used to tune the output voltage, as my understanding is that the output voltage is given by V=I*R where I is the current through the inductor before switching, and R is the resistance of the RL circuit. The 1 Ohm resistor is being used to limit the current through the resistor.

This circuit does technically do what I want it to do. It produces a very high voltage (I think about 7 kV) spike when the switch is opened. However, the switch is the real problem. If I use a solid state switch (MOSFET, SSR, etc.), there would be major issues with the voltage rating of the switches as it is going to be very hard to find a switch that is ok with 7 kV being dropped over it. The easier alternative is using a relay, but I need to prevent the relay contacts from sparking. The only way I know to prevent this issue is to use a flyback diode, but that will also reduce the voltage produced by the inductor so the spark plug is unlikely to fire.

The only solution I've come up with is to use a PPTC resettable fuse to block high currents (as anything greater than (5 V/1 Ohm =) 5 A would be unusual in the above circuit), but that would also rely on the fuse being rated for very high voltages. Are there any better ways of doing this? How do cars do this without having a huge potential difference between the positive terminal of the battery and the positive terminal of the inductor in the ignition coil?

How can I use the voltage generated from inductive kickback?

The current flowing through an inductor, upon closure of switch contacts, would result in energy being stored in its magnetic field. Disruption of the current, caused by the switch contacts opening, would lead to a collapse of the magnetic field and consequent induction of a high voltage that would spark across the open contacts to transfer energy back to the source.

Should that inductor form the primary of an ignition coil with a turns ratio of 1:100, the voltage of around 200 V induced by it would be stepped up by the secondary to around 20 kV and fed to the spark plug via a high tension cable. 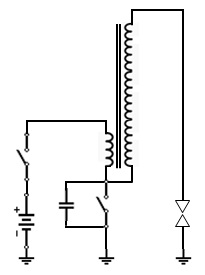 A capacitor across the contacts would provide a path for the induced current to to weaken the spark and minimizing pitting.

Are there any better ways of doing this?

You use a step up transformer.

If the step-up ratio is (say) 50:1 and the output voltage is (say) 10 kV before it sparked, then the primary voltage back emf is: -

Note that when the secondary output produces a 10 kV spark it causes a primary back-emf of 10 kV divided by the reverse turns ratio i.e. it then operates as a step-down transformer.

That is how flyback transformers can generate big voltages without an excessive back-emf on the primary.

Not the answer you're looking for? Browse other questions tagged inductor high-voltage flyback kickback or ask your own question.

1
Safe use of high voltage in laboratory environment?
6
Clamping Inductive Kickback in AC Circuits
7
Are flyback diodes needed for this op-amp voltage controlled inductor?
2
High voltage (2-6 kV), high frequency (20-50 kHz) power supply how to achive
2
Flyback transformer vs neon sign transformer
2
Why is inductive kickback not V=IR?
1
Stopping flyback spark from inductor, but only some of the time
1
Protecting capacitor from high voltage impulse spikes