What is the right way to understand the behaviour of shocking voltage?

I am just a starter and I am reading some beginner material about electricity.

I have some problem understanding this page which was about shock current path. 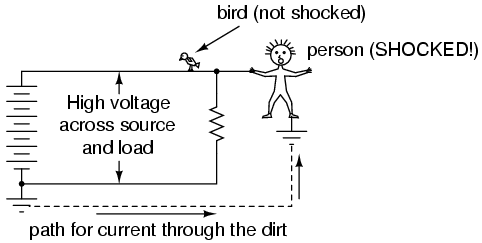 The writer explained why the bird is not shocked while the man got shocked:

This might lend one to believe that its impossible to be shocked by electricity by only touching a single wire. Like the birds, if we're sure to touch only one wire at a time, we'll be safe, right? Unfortunately, this is not correct. Unlike birds, people are usually standing on the ground when they contact a "live" wire. Many times, one side of a power system will be intentionally connected to earth ground, and so the person touching a single wire is actually making contact between two points in the circuit (the wire and earth ground):

While I know that current flows from the negative end to the positive end, I had a concept ( which is probably wrong ) that after passing through the load, the energy would be consumed and therefore it is safe for anybody to tough the positive side of the wire.

On the other hand, the writer said the bird is not shocked because the bird didn't complete the circuit if the bird only put 1 foot on the wire. And even though if the bird put both legs on the wire, a circuit for the current was completed, the 2 legs were electrically common so there is no voltage across them. I think the man in the picture are in similar situation but he was shocked. How come? Does the present of the load make a difference? What if the load is removed, and the man grabs both the negative end and positive end of the powered wire?

I read the chapter again. According to it: 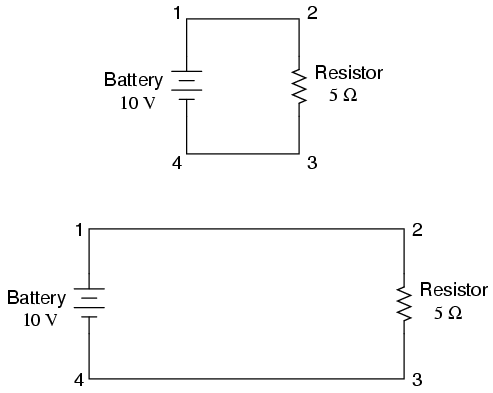 If connecting wire resistance is very little or none, we can regard the connected points in a circuit as being electrically common. That is, points 1 and 2 in the above circuits may be physically joined close together or far apart, and it doesn't matter for any voltage or resistance measurements relative to those points. The same goes for points 3 and 4. It is as if the ends of the resistor were attached directly across the terminals of the battery, so far as our Ohm's Law calculations and voltage measurements are concerned. This is useful to know, because it means you can re-draw a circuit diagram or re-wire a circuit, shortening or lengthening the wires as desired without appreciably impacting the circuit's function. All that matters is that the components attach to each other in the same sequence.

The whole theory of electrically common is based on the fact that the wire got very little or none Resistance so that it require almost no voltage to push the current from point 2 to point 1. However, if we consider the bird is on its 2 legs, it would form another path for the current and the resistance is somehow much larger than the wire. I think it is the Resistance of the bird itself matters. Am I right?

The bird doesn't because it's only touching the positive terminal, so there is no potential difference across it's body.

Regarding the energy being consumed part, as long as the voltage source is strong enough (i.e. has a low internal resistance) an assuming it has "infinite" capacity to keep supplying power (e.g. a mains source as opposed to a battery or capacitor) then it will supply current to many loads connected in parallel to it, without it's voltage dropping appreciably.
If it is a weak source, then it's voltage will drop if a low resistance load is connected across it - in this scenario it would be safe(r) for the man to touch it (depending on how much the voltage drops - this sort of stuff is all covered by Ohm's law, Norton and Thevenin)

Simulation, seeping the birds resistance from 1Ω to 1kΩ:

You can see the current through the load R1 (green trace in the bottom graph) is around 2A, and hardly changes at all.
For the bird, even with a resistance of only 1Ω, it only has 2mA flowing through it. At 1kΩ, it has 2μA flowing through it (note the logarithmic graph used on the X axis due to the large variation)
In reality, unless the bird is soaking wet, and the cable it's standing on is very thin, then the above values are a long way from typical. Typical bird resistance will probably be > 1MΩ, and the resistance between it's legs probably less than a few μΩ.

Hopefully this makes some sense - it all agrees with Ohm's law, and once you get the hang of it it will seem quite natural. It might be good idea to grab something like LTSpice (the simulator used in the above examples and have a play around with it to see what happens when you change various things. Or build a circuit on a breadboard and measure with a multimeter. Also, have a good book that covers this stuff handy (see "Art of Electronics", "Practical Electronics for Inventors", etc)

3
Why is it safe to touch the chassis of a tube amplifier and something earth grounded simoultaneously?
19
Static shocks all over the building
0
How does earth ground complete the circuit?
1
grounding, whats its purpose?
1
Earth Ground's role in 3 prong AC systems
0
Chassis grounding short circuit
0
Why am I getting shocked from “hot” line and touching “ground” (Earth)
2
Live wire and ground question
3
Why doesn't electricty flow to earth ground when I connect my oscilloscope ground clip to a floating circuit?