Calculating capacitance of a cable

I measured the capacitance between to 100m cables to 10nF with a calibrated LCR meter. Both of the cables are inside a bigger one: 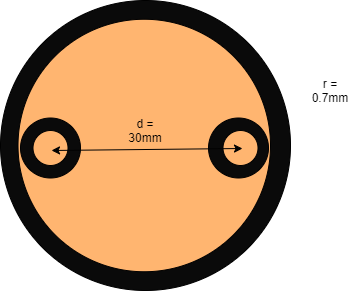 Is my formula wrong? What am I not considering here?

Is my formula wrong? What am I not considering here?

You are not recognizing that the solid copper volume that surrounds the two insulated conductors shortens the distance dramatically. Then if that solid copper is earthed: -

Yes the big copper is earthened. Which tool do I have to use? Or which formula?

And if the big copper is earthed than you are using the wrong calculator tool. So, with it being earthed the capacitance between the cores is largely immaterial and of no consequence.

You can certainly measure capacitance but what does that tell you that is useful to know. Now the two cores should be treated as two separate coax cables and if you did that and asked someone what the capacitance is between the two coax cable inner conductors/cores then you would just get blank stares because it is meaningless without further context.

But when I use a time domain reflectometer I can still measure the cable length.

TDR relies on an anomaly at the end of the cable i.e it has an open circuit. TDR does not use a capacitance measurement; it emits a very thin pulse and measures the time for it to hit the end of the cable and cause a reflection that is then received after it travels back up the cable. Totally different thing entirely.

Not the answer you're looking for? Browse other questions tagged cables capacitance or ask your own question.

2
terminated cable capacitance
0
What's the definition of “signal to ground capacitance” of a coaxial cable? What's the difference between it and normal capacitance?
0
factors influencing capacitance of a cable
0
Calculating equivalent capacitance
1
Using AD5933 with an external amplification to measure changes of permittivity
0
How can I calculate the total capacitance of a pair in this cable by using data-sheet?
0
Cable for remote capacitance measurement
0
Measuring length of two wires inside copper with a TDR