How to generate an impulse to test a system's impulse response

I just started learning some basic control theory to better understand how a transfer function is constructed from a circuit and how a system is characterize by a function. In it I found analyzing a system regularly uses singularity functions such as impulses and steps, and by operating on the superpositions of these functions, we can make the math easier to calculate.

Now I am so sunk into the math that I can't relate these math operation to reality. If I'm given the equation for an input function \$ x(t) \$, an system function \$ h(t) \$ or operator \$ H \$, I could probably calculate the output \$ y(t) \$. All these calculations utilizes an ideal dirac-delta impulse, in multiplication or integration with a superimposed element of an equation.

In practice, how can I produce such an impulse to couple with part of the signal? Do I use the pulse function in a function generator to approximate an impulse? Or people short their circuit (e.g. shorting and discharging a large capacitor) to approximate a dirac-delta impulse to see how a system response?

Just use a function generator but be aware that the pulse amplitude needs to be high (or you get a small output signal) and that the thinner the pulse, the flatter the spectrum. So, if you require a spectrum of 20 kHz for testing a loudspeaker for example you might use a 1 µs pulse width because a 1 µs width will have a decent flat-ish spectrum up to around 100 kHz: - 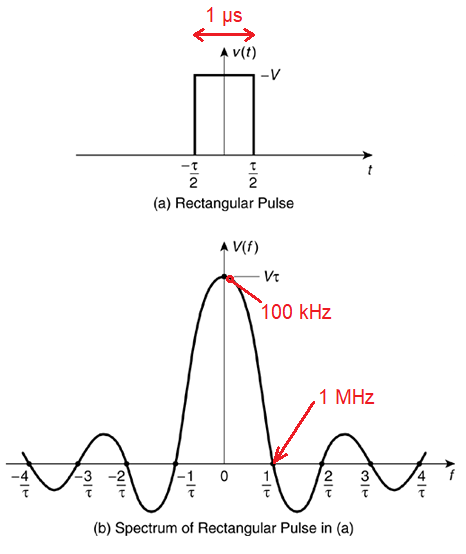 I've added the red parts to the diagram to show what I mean regarding a pulse width of 1 µs and the flatness of the spectrum up to 100 kHz.

One way you could do it is with a step input, and then differentiate the output. That will give you the impulse response. This is because a step input is much easier to prepare (a fast switching transistor, for example) than an impulse, and since the step response in Laplace means multiplying by 1/s, then differentiation means multiplying by s, thus leaving the transfer function, or the impulse response.

The differentiator can be as simple as an opamp with resistive feedback and capacitive input. If the time constant is not 1 then the output will appear scaled.

To put a bit of math to what Andy and a citizen wrote:

It's clear that your method of measuring the impulse response \$h\$ of a system works with an actual impulse, as the in/output relation of an LTI system is the convolution \$*\$ of the input with the output:

Now, this works in frequency domain, too, because due to the properties of Fourier transform, the convolution of two signals in time domain is equivalent to multiplication of their Fourier transforms:

So, indeed, since the Fourier transform of the diract delta is a constant 1, you get the frequency response of the system when considering your measurements in frequency domain.

Now, let's go the route Andy proposes: use a rectangular pulse \$\rect_T(t)\$ with width \$T\$. In frequency domain we now get

and as you can see in Andy's excellent illustration, that is "good enough" if the part of the spectrum you care about is happening around the peak of the sinc in a narrow frequency window (lowpass region) that allows you to ignore the fact that the sinc, in fact, is anything but a the constant 1 that we got from the dirac impulse. Also, the longer the duration \$T\$ our rectangle, the narrower the frequency span in which our measurement really resembles the impulse response.

So, we want our rectangle to be as quickly OFF/ON/OFF as possible, right? That's going to be a bit of a problem:

What matters is not the "sharpness" of a pulse, what matters is how flat I can make it look in the spectrum. Sadly, since the pulse's time domain and the pulse's spectrum are linked, it seems these two things do go hand in hand. But, we can do post processing.

Imagine a signal \$s(t)\$ that has an autocorrelation function \$\phi_{ss}(\tau)=\delta(\tau)\$, i.e. it's perfectly white.
An autocorrelation function is just the (expected, but this is deterministic) convolution with itself's time inverse. So, what happens if we first measure the system, giving us \$g(t) = s(t)*h(t)\$, and then convolve the result with \$s'(t) = s(-t)\$?

So, the trick is to use a wideband signal \$s(t)\$, which occupies all the spectrum that you care about, and put that through your system, and then correlate the thing against the input signal. Of course, since your signal is finitely long, and can also not be infinitely wideband, you never actually get the \$\delta\$ autocorrelation, but for most systems (and physical things that excite systems), it's much easier to excite with something whose amplitude doesn't have to change incredibly much in very short time.

Note how you can make \$s(t)\$ arbitrarily long, solving the signal-to-noise-ratio problem that we had with the rectangle.

While there are analog ways of generating a white-as-possible signal and correlating with it, it's rarely done in analog domain: generation of white sequences in a computer is nothing but using an appropriate random number generator to compute a couple samples (or using known special sequences), and correlation/convolution is a simple algorithm.