I'm trying to read an audio signal from an Android phone as a serial input to an MSP430G2553, adapting this design to use the MSP430's onboard comparator module instead of an LM324. The Android code to make a square wave out of the audio jack is available here. The output is not pretty, but that's for another question.

In my case, the comparator's positive input is the internal precision voltage reference (0.5*VCC) instead of an external pot. I have applied a DC bias to the audio signal in order to center it around the 0.5*VCC mark before going to the comparator's negative input on P1.5 (CA5) like so (the AUDIO net is CA5): 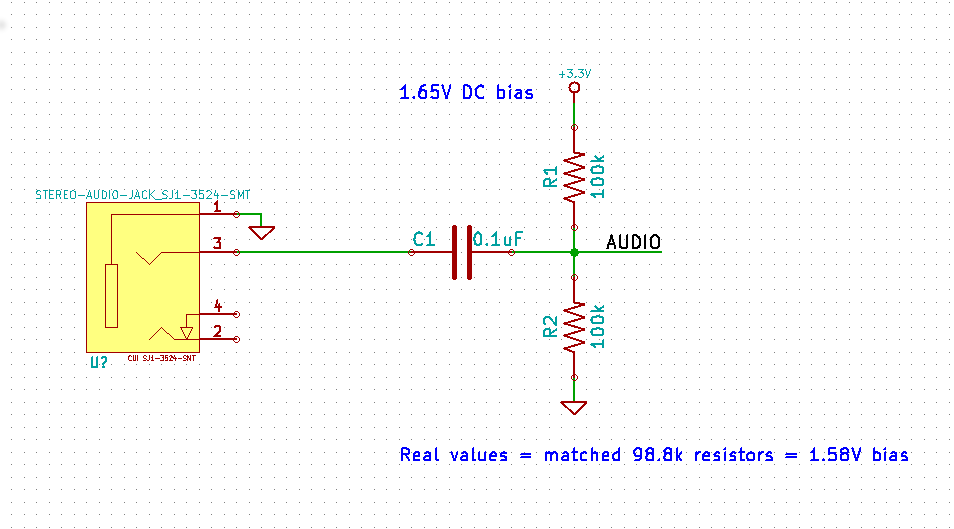 Here's where things get weird. Now, if I plug in USB to the Launchpad to debug, the DC bias on the CA5 input cuts in half from 1.6V to about 800mV. What could possibly be causing this?

The answer from discussion above:

"it was actually the internal pulldown despite the value not making sense. When I configured P1.5 as a comparator input, Grace greyed out the column to configure the pulldown so I figured it was not available when using the comparator alternate pin function. Turns out, if you go into the other tab to set up the registers manually (via checkboxes), the pulldown was still enabled in the register."

Not the answer you're looking for? Browse other questions tagged audio analog ground msp430 comparator or ask your own question.