Is the electric field in a wire constant?

If \$V=I\cdot R\$ according to Ohm's Law, that implies that \$\frac{\mathrm dV}{ \mathrm dx} = \frac{I \rho}A\$ across an infinitesimal length of conductor, which is constant at all points along the conductor since the current, resistivity, and area of the conductor are all constant.

\$\frac{\mathrm dV}{ \mathrm dx}\$ is also equal to the electric field, which I wouldn't think would be constant at all points along the conductor since E is a function of the distance from a source (e.g., the battery that the conductor is connected to), so I would think that E would change depending on the location of the conductor. This change might be negligible for a short length of conductor, but over long lengths, I would expect it to be significant.

The key to understanding how the electric field follows Ohm's law in a good but non-perfect conductor, is: surface charges.

When the conductor is connected to the supply, it is initially subject to the electric field generated by the supply's electrodes. Being a good conductor, the (nearly) free charges inside will react to that field by quickly rearranging themselves on the surface of the conductor (very much like they do in the electrostatic case in order to make the field inside zero.)
With cylindrical metallic conductors, you can think of rings of charge, whose density will vary from point to point according to the geometry of the wire. For example, on a straight piece of wire, far away from other sources, two uniformly charged rings of different density will produce and axial field directed form the more positive (least negative) ring to the more negative (least positive) ring, like this:

By suitably changing the charge density of these rings along the conductor, the electric field inside can be made to follow the bends of the circuit. Both positive and negative charge gradients work: 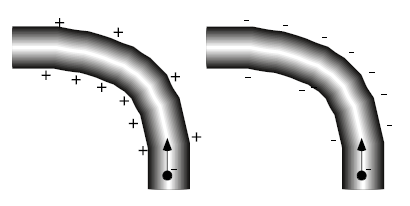 The actual distribution of charges is in general more complicated and the charge density does not even need to be uniform on the same ring, but the principle is that the total internal electric field, superposition of the original field generated by the supply and the field generated by the surface charge, will be directed along the conductor and will have magnitude \$E = j / \sigma\$, where \$j\$ is the current density and \$\sigma\$ is the conductivity of the material the wire is made of. 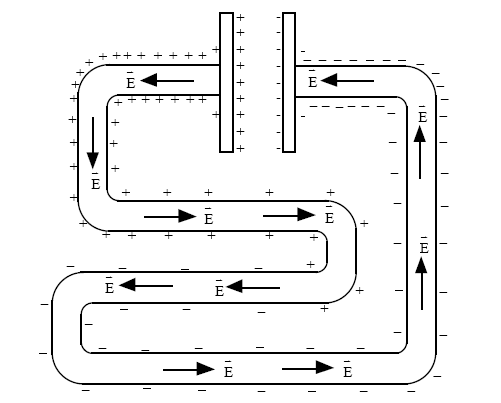 So, to answer your question, the field is constant in magnitude and is directed along the direction of the conductor.

With the circuit open we are in an electrostatic context: the field inside the conductor is zero, while on the surface it is perpendicular to the surface

When we close the (battery supplied) circuit on a conductor of finite conductivity, the charges on the surface will redistribute themselves very rapidly (with relaxation times) resulting in the establishment of a constant electric field directed along the wire, so that a steady current will flow. The surface charge density will therefore change radically; in particular, in the case of a single resistive wire, there will also be a point along the circuit where the density becomes zero:

Variation in surface charge density distribution when the circuit is closed

In this newly established quasi-static condition the field inside the conductor is no longer exactly zero but has the (usually tiny) value \$E = j / \sigma\$ that satisfies the local form of Ohm's law. Since the tangential component of the electric field has to be conserved at the interface between materials, the field on the surface will no longer be exactly perpendicular to it but will change from nearly perpendicular and slightly slanted toward the direction of the current (where charge density is highest) to nearly completely tangential (in the points where charge density drops near-zero levels.) 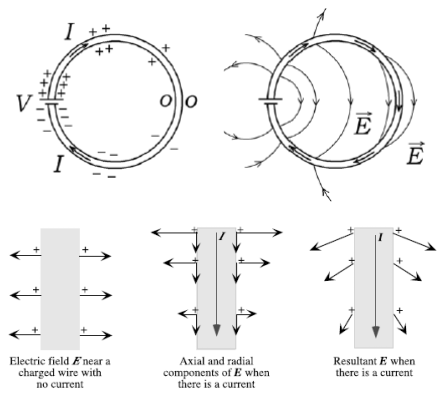 (Sources: top - Andre Koch Torres Assis, Julio Akashi Hernandes, "The Electric Force of a Current", bottom - "Understanding Electricity and Circuits: What the Text Books Don’t Tell You", Ian M. Sefton)
When the circuit is close, the field inside acquires a tangential component that follows the wire, making the field at the interface slanted in the direction of positive current.

In general there are different configurations the electric field can assume, according to the actual distribution of charge around the conductor at a given point. In two dimensions, you can encounter the following situations (highlighted by the yellow disks in Muller's simulation shown in the references.)

While the electric field inside the current-carrying conductor is constant and directed along the wire, immediately outside it can assume different configuration according to the local and nearby distribution of charges

It all depends on the distribution of surface charge, either locally (for example charges tend to accumulate at sharp bends in order to steer the field inside the conductor there) or from nearby parts of the circuit (as shown in Muller's simulation below).

How does the internal field changes from \$E=0\$ to \$E = j / \sigma\$?
You might wonder how the conductor evolves from the condition E = 0 to the condition \$E = j / \sigma\$, so here is a very rough 'still animation' showing a piece of straight conductor located that is not subject to other charges distributions apart from the ring of charges along its length (meaning it's reasonably far from the battery and other sharp bends in the circuits, where surface charge accumulates): 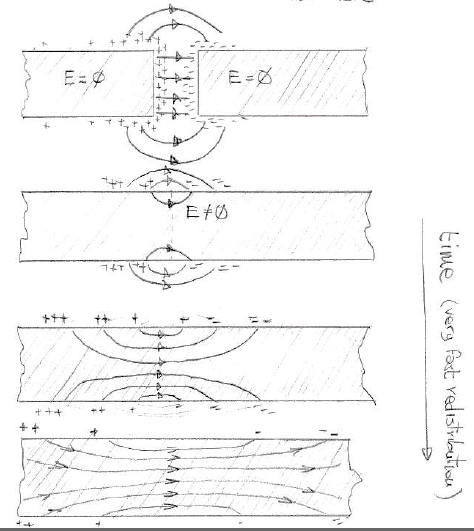 When we close the circuit, the surface charge on the opposite extremities of the wire recombine and redistribute itself, progressively creating electric field lines inside the conductor that gets straightened out until the field is directed along the conductor

This is just a free-hand sketch, since I do not have links to actual simulations at hand. 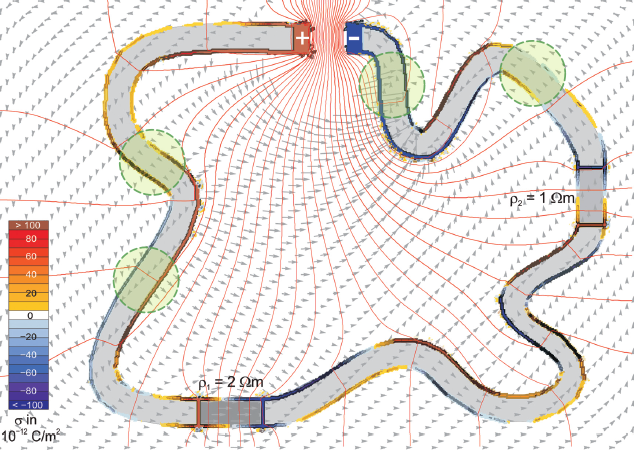 Simulation in Rainer Muller's paper (yellow disks added by me): charge density in blue-red, note the field directed along the conductor inside the wires and the accumulation of charge at the discontinuities in resistivity and at the bends in the wire. Also note the slanted field immediately outside the straightest portions of the wire. Since the rings of charge can have non-uniform density, sometimes the field emerges from the surface, sometimes it impinges into it.

(Also, in my answer here, towards the end, I show how to wrangle Maxwell's equations to explain how charge density, for a given current density, changes according to gradients in conductivity and permeability. This explains why charge accumulate at the surface of the wire and at interfaces with material of different resistivity)

... I wouldn't think would be constant at all points along the conductor since E is a function of the distance from a source (e.g., the battery that the conductor is connected to) ...

You are mixing your physical laws. In a vacuum, given a static electric field, \$\vec E\$ is a function of position with respect to the source terminals, yes.

But In a conductor, current (i.e. electric charge) will flow in response to an electric field. That redistributes charge, which changes the electric field. When you have a circuit that's composed of various bits with resistance, surrounded by a non-conducting vacuum, then the easiest relations to compute is the distribution of voltages in the circuit (according to Ohm's and Kirkoff's laws). You can then deduce the electric field within the conductors if you so desire.

E is a function of the distance from a source (e.g., the battery that the conductor is connected to

no, the battery's distance is completely irrelevant. Thought experiment: Plate capacitor, where your \$E= \frac{\mathrm dV}{\mathrm dx}\$ does hold. You attach that with a cable to your battery. Does it matter at all to the electric field between the plates how long that cable is?

You need to take a step back and conclude this: When there is an electric field along a conducter, a current will flow! So, if you take a resistive wire and connect your voltage source, and a constant current flows, then yes, it follows that the field strength is the same all along the wire.

Conversely, the same equation that dictates the current flow in presence of a field over a conductor implies the lack of a field if no current flows: for example, if the capacitor from above though experiment is charged to the same voltage as the battery, then no current flows anymore, and you'll also notice that there's no voltage gradient along the wire.

So, all is consistent, but your assumption that the field originates at the voltage source isn't correct.

Not the answer you're looking for? Browse other questions tagged voltage resistance ohms-law resistivity electric-field or ask your own question.

23
In which direction do electric signals flow?
6
What would a voltmeter measure if you had an electromotive force generated by a changing magnetic field?
6
Can two voltmeters connected to the same terminals show different values? Circuit with induced EMF
1
What exactly are surface charges and what do they do?
0
Does an alternating current have surface charges associated with the current charges?
0
How current flows in a circuit as per Kirchhoff's law if the voltage dropped = voltage applied

1
Current capacity of wires
0
Electric potential and length of wire?
0
Resistance of twin core wire
2
General definiton of Ohm's law
0
Earth Fault in a TT Network: Current loop, or charges flowing from one grounding to the other?
0
calculate force on object between capacitor plates without knowledge of area
0
Derivation of resistance of coaxial cable
0
A DC current through a inductor does not create electric fields
1
The equation of surface charge density is incorrect with only the sign is opposite of capacitor of cylinder form