I'm a newbie in electronics. I watched a youtube video that showed how to activate LEDs using a microphone. It's project #3 at https://youtu.be/zsJ61yJhWVU?t=115

The guy built the circuit on camera but did not explain its working. He did flash a circuit diagram (which I'm attaching here too).

I roughly get the point of this circuit but want to understand it completely.

a. I understand that two back-to-back amplifiers are needed to achieve good amplification. Correct?

b. I understand that capacitor is used at the base of the first transistor because audio input is not a DC (constant) signal but a time-varying analog signal. But why is it necessary? What will happen if we remove the capacitor at the input.

e. Why isn't there some resistance at the collector-to-emitter path of the second transistor (to me it looks like a short circuit and the transistor will be damaged).

f. Is there a way to build a circuit that converts audio input to LED output just like this circuit, but with even fewer components. (I want to start with simple and then understand why we need more components so that I can fully grasp the concept and practice). 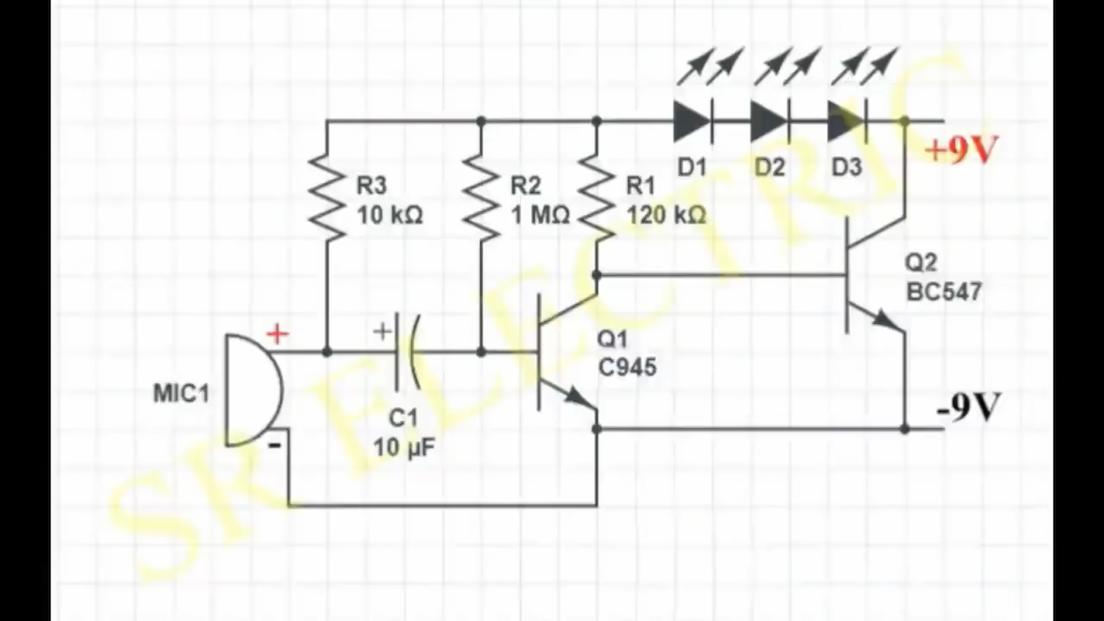 The +9V (positive battery terminal) should be connected to the top of R1, R2, and R3, and there should be a resistor between the top of R3 and D1 to limit the current in the LEDs.

I expect the -9V label is the negative terminal of the battery - it would be better to call that terminal "Ground". The +9V and -9V labels imply an 18 volt supply.

2
Explain this circuit?
7
Simple transistor & capacitor circuit question
2
Input voltage for LM4862 audio amplifier
2
How do I change the output volume of this audio amplifier circuit?
2
LM386 audio amplifier with push-pull output
3
Help needed in understanding this LED chaser circuit
0
how to increase output power of multistage audio amplifer?
0
What for are two resistors and one capacitor when attaching an audio CD drive output to a TDA7318, but not for Line In?