I have an ATWILC3000 wifi module connected to a Raspberry Pi Compute Module 3+ over 4-bit SDIO. It's throwing a lot of bus errors at higher frequencies (currently running at 1 MHz for stability when it should be closer to 50 MHz). In probing the bus, I found that the rise/fall times of the clock line are substantially worse than the data lines in violation of the 5ns maximum specified by Microchip for the clock. Shown below is the (presently 5 MHz) clock on scope CH1 (yellow) and D0 on CH2 (green): 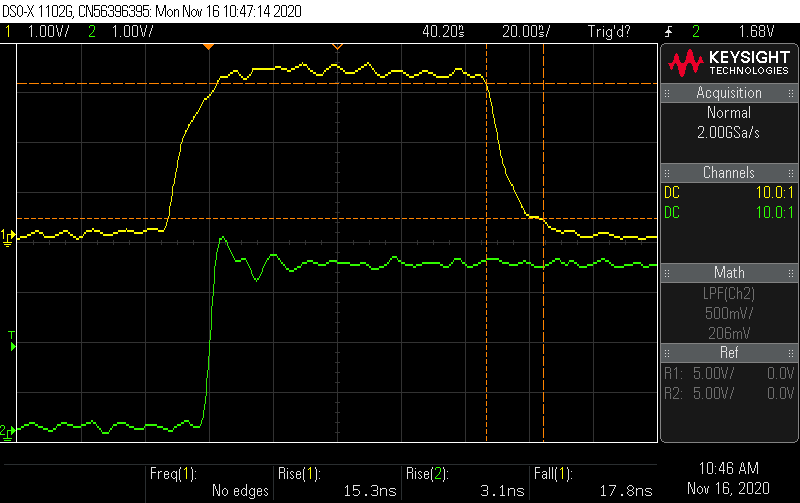 I can't seem to figure out why the clock line would be loaded down more than the data line, especially to that degree. Here's what I've looked at so far:

Given the above, I'm wondering about the Pi drive strength. I know the Pi is sourcing that clock, but I don't know which direction the data lines are being driven in any given scope capture. If my good data rise times are coming from the wireless module, that would suggest the Pi is to blame.

As I suspected, I was able to resolve this by increasing the drive strength of the Pi GPIO to 16mA for all of the pins on the bus. I'm fairly certain that what I was seeing was the ATWILC3000 driving the data line while the Pi was driving the clock. With that change, I am now able to operate at 25MHz without issues.

Not the answer you're looking for? Browse other questions tagged impedance clock rise-time sdio or ask your own question.