Below is an illustration on how coincident decoding works in which the total number of gates used in the decoder can be reduced by employing two decoders in a two‐dimensional selection scheme: 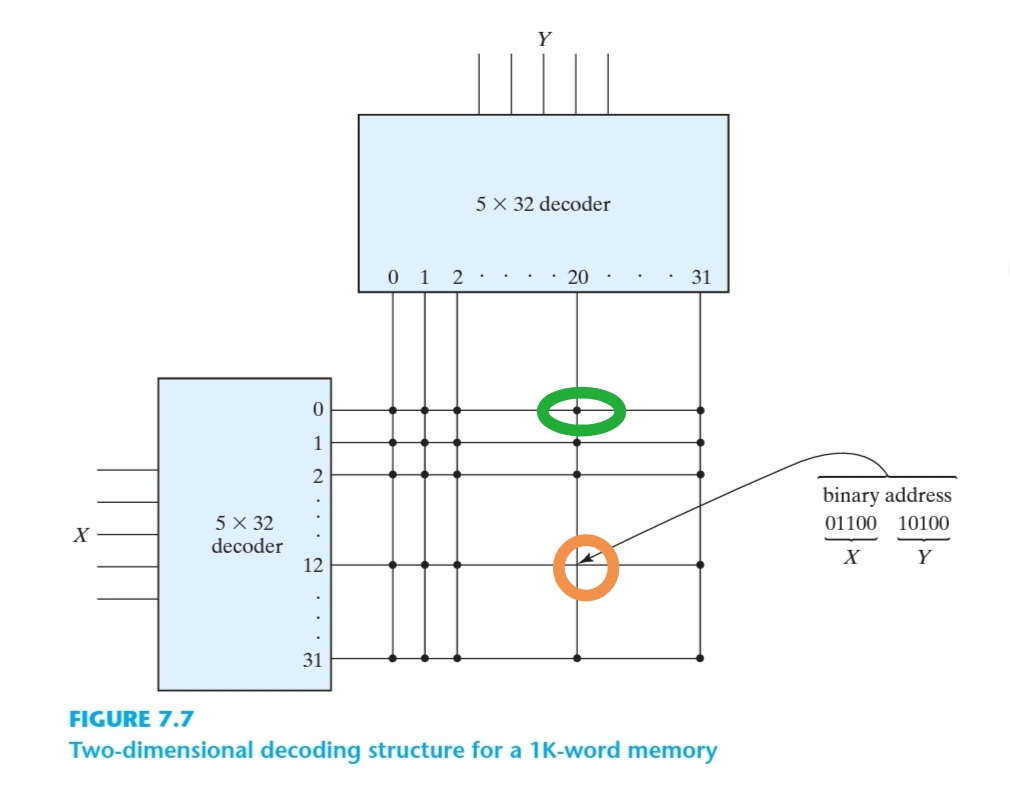 If x-output 12 and y-output 20 is both logic one, then the intersection(colored orange) will be logic 1 right? But what about the others? For example, if x-output 0 and y-output 20 is logic 0 and 1 respectively, how will the interestion(colored green) will remain disabled(logic 0) and the orange colored intersection to be the only one active(logic 1)?

I thought that the intersection would mean the logic 1 being shorted to logic 0 that's why the result will be grounded(logic 0),but I doubt this since this would mean that every disabled intersections of the RAM block will be shorted and that sounds bad to me....

The diagram show is a high-level view of the decoding structure, it's not representative of the actual circuit.

The intersection points where it shows a dot are not intended to show that the two signals are physically shorted together (like you would find in an electrical schematic), but rather the dot represents a memory cell - in this diagram a dot seems to show a disabled cell, and a non-dot shows the enabled cell.

It doesn't have to. The logic result of two inputs depends on the type of logic function used. If the two inputs (x and y) go into an AND gate, then for three input conditions the output is a 0, and only for the (1,1) input the output is a 1. In a selection matrix such as your, this is the usual method.

As an example of some other function, if you have a NAND gate at each intersection, then the output is high for either (0,1) or (1,0), and is low only when the inputs are (1,1).

Augustas Demorgan, back in 1840, proposed philosophies suited to your question.

Why think this way? It underpins mathematical deduction.

0
Converting Positive Logic to Negative logic. 7 Segment Decoder
1
How do I direct input/output to correct circuit module. (2 bit calculator circuit)
0
Signal-driven 3 output logic gate decoder or switch?
0
How to multiplex one clock among multiple selectable outputs?
1
Reducing the amount of controller output required - making k of n binary to unary decoder out of 1-of-n decoders
1
Would this circuit work like an SR latch? Why is it better to use two NOR gates?
0
How does TXS0108E keep it's outputs at high impedance given it's internal block diagram?
1
Bus contention when addressing tristate buffers by decoder output