Reading an IR signal and running one of 5 motors

Before you judge me, I'm fairly new to electronics besides the very basics, so be gentle. However, I'm quite proficient with computers at a high level; I'm decent at writing code, and have experience with Java, C#, and JavaScript.

Basically what I want to is send an IR signal from a computer to an IR receiver in a box about 2-3 feet away. (yes, it has to be IR.) Once the receiver gets the signal, it needs to turn on one of five small motors for, oh, 500msec, (each of which take in ~1.5-3v) depending on which of 5 signals is sent to it.

Now there are several parts to this:

This transmitter must send data at least 2 feet, up to 5. (Shouldn't be an issue, I think). I'll need to control it via USB. I've found two:

I can't post more than 2 links, so search Amazon for Syba SD-U1IRDA-NM USB Fast Infra-Red Adapter - a more expensive ($12) IR adapter. One of the pros of this is that it already has a USB port.

The receiver must be fairly small (maybe up to a max of 2 cubic cm). So far I've found one:

Now, something needs to move the motors. I'm guessing a PIC (not sure which one, please suggest one) since they're cheap, popular, and a relative gave me a PIC programmer, circa 2006 (I assume this doesn't matter), for last xmas (she had no clue what it was - but someone told her it was a good present for a programmer)

This is the area I'm most fuzzy on. I guess that I'd somehow connect power to two legs of the sensor, connect the third leg to part of the PIC, have the PIC run some simple code to figure out which of the 5 signals it received, and then turn on power for one the 5 motors, turning it off ~500msec (in no way has to be precise) later.

tl;dr: Which, if any, PIC should I buy? Which IR transmitter works? Does this IR receiver work? How do I program the PIC and how should I wire it to control the motors?

You can build a simple RC5 decoder using a PIC microcontroller.

Receiver: A RC5 decoder can be built around a PIC microcontrooler. Take a look at RC5 Decoder with PIC Microcontroller. This article describes RC5 protocol, hardware and software needed to decode RC5. You many have to change the code to your taste. To drive motors, use simple transistor drivers at PIC outputs. The motor driver depends on the type of motor you are using. 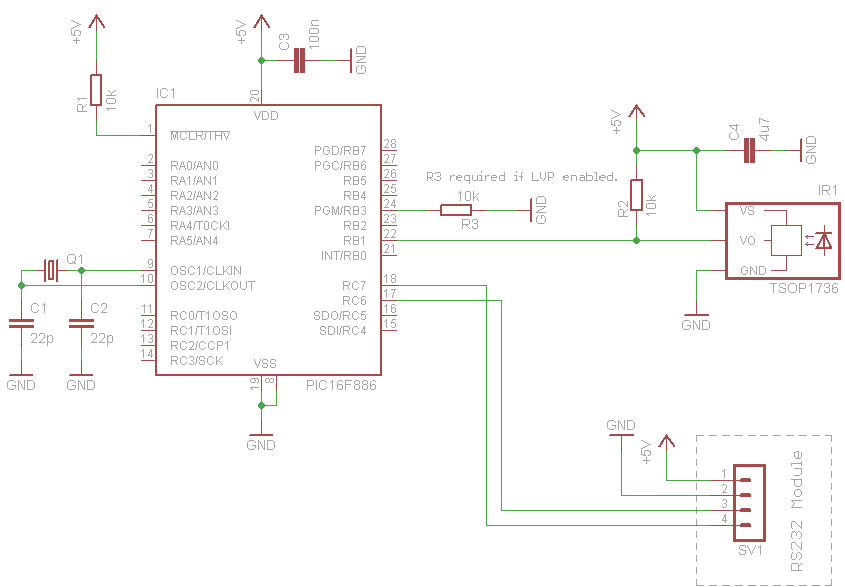 Your question is asking a number of sub-questions, which could (and should) probably be questions of their own when you get to that point.

But to address things in a macro perspective:

A simple infrared emitter (IR LED) is all that is used in most common household remote controls. You can easily find these from any reputable electronics source. The distance you need to cover (2-5 feet) is trivial for most of these. It can become more difficult with interference or IR saturation such as in the outdoors from sunlight, but I'm assuming your application is indoors/office. You'll want to use something 900nm to 1000nm (NIR) in wavelength; my recommendation is to avoid ones listed at 890nm or below, as some of them can emit visible light. (Though that recommendation is more for IR illumination of night-vision camera equipment than remote controls.)

Viewing angle of the LED is important, because it will have an effect on how well the emitter and receiver must be aligned. An Optek OP265W has a 90° viewing angle, which gives a lot of coverage, but may diminish the brightness (and thus operating range). However you said your range is small (2-5 ft.). They also have 18° angle packages, which I'd use for a longer-distance application.

Match the emitter in wavelength and frequency, mainly. The one you linked is most sensitive from about 900 to about 970nm. Its datasheet shows that there are various carrier frequencies which make one part or another more or less ideal. For example, the TSOP38238 is recommended for 38 kHz applications. (More about frequency next.)

These devices are small, usually no larger than a 5mm through-hold LED or a standard TO-92 transistor. But consider you will need some supporting circuitry to drive the receiver and decode signals, and also drive the motors. Which brings us to:

Let's say you have the IR receiver on a small board, what else is there? Well, you'll need a microcontroller to decode the pulses, some transistors or relays (or combination of) to drive motors, and of course a power supply. So don't forget these critical items when calculating the space needed for the receiver and its associated electronics.

You can definitely use a PIC (or any other micro), and probably recommended since you did mention you have a programmer already. Though I am not a PIC expert, you'll want to ask about the programming aspects separately.

Generating (and decoding) the pulses usually is done with pulse width modulation, in which you vary the length or duration of pulses on a clock. For the receiver you linked, the frequencies are in the 30 to 56kHz range. There are a lot of articles about encoding and PWM, you'll need to research what seems right for your application.

You'll wind up connecting the IR sensor to the PIC, with some supporting filtering components, and also connecting some output pins to the motors. You didn't mention what size of motors, or if they are steppers, DC or AC. Those attributes are going to affect what components you select (power transistors, relays, etc.). Since you need 500ms pulses, I'd recommend looking for power transistors or MOSFETS but more information is needed before anyone can make a recommendation.

The motors you mention are 1.5-3 volt, which I assume to be small DC motors. They're still going to take (almost assuredly) more current than the micro can source, so you'll need to look up motor driving circuits from micros. Here's one from Seattle Robotics.

To sum up, you'll need to research methods of encoding for IR transmission (pulse-width modulation is most common). Also look at ways of driving motors from microcontrollers (lots of information on the net) - the bottom line is that you can't drive the motors with the micro directly; it cannot provide enough current.

I suggest you break the project into smaller pieces and ask about them specifically as needed, you'll get more detail.

Not the answer you're looking for? Browse other questions tagged microcontroller pic infrared ir-receiver or ask your own question.