One of the application circuits for the op-amp is the summing amplifier which can add as many input signals as you need.

My question is, how does the op-amp add more than two input signals when it is actually made of discrete transistors circuits?

Am I missing something here?

A transistor can add n input signals, a crude example is the following 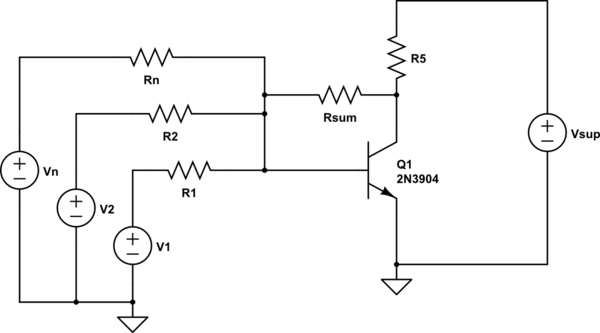 You can also do it with a common base circuit.

My question is, how does the op-amp add more than two input signals when it is actually made of discrete transistors circuits?

Well, a) above statement is false, b) the opamp is a differential amplifier (with a very high gain).

How the summing amplifier built from an opamp works is explained in 1000 places on the internet, so I'll allow you to research that yourself.

Actually, in these configurations, the two input voltages are connected in series and opposite (traveling the input loop). So we can say they are summed in a series manner, according to KVL, by the input loop… and the output voltage appears at the differential input. The conclusion is that the humble loop acts as the simplest series voltage summer.

We can enlarge this idea adding/subtracting more input voltage sources by connecting them in series, in direct/opposite direction - Fig. 1. But a problem appears - only two of them can be grounded; others will be floating (ungrounded). 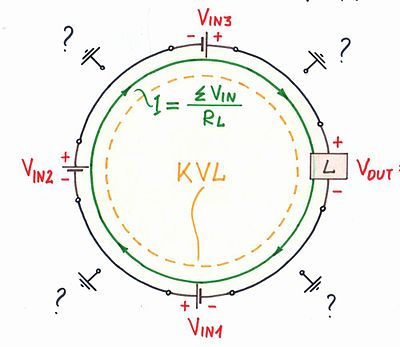 Fig. 1. Summing voltages in a series manner (according to KVL) 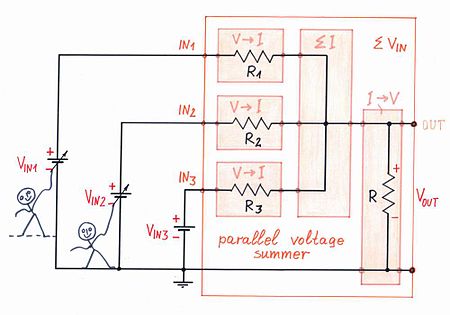 Fig. 2. Building a parallel resistor summer (according to KCL and Ohm's law)

So, the general conclusion is:

Addition and subtraction are performed by simple electrical circuits and not by active elements (transistors and op-amps). The role of active elements is only to make the passive summing circuits perfect.

For example, in the op-amp inverting summer, the "feedback resistor" R is just another (fourth) input where the op-amp output voltage is applied with such a polarity so that to zero (compensate) the voltage of the common summing point A; as a result, it becomes a "virtual ground". Thus the input currents depend only on the corresponding input voltages and the inputs are independent of each other (they are separated by the virtual ground). 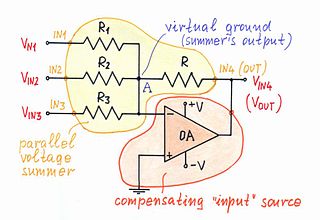 See also my Wikibooks stories about the series and parallel summer.

The short answer is that an opamp has way more going on inside than just the input differential pair. If you recreate the rest of the opamp's internal functions with discrete transistor circuits, you will get the same results.

Not the answer you're looking for? Browse other questions tagged operational-amplifier transistors or ask your own question.

3
Why are two 1 kΩ resistors used for this additive stereo to mono conversion? (For audio inputs to an amplifier)
1
Diodes circuit analysis problem and voltage calculation

1
Can you sum and difference in a single op-amp?
6
Are op-amp circuits more noisy than amplifiers built from discrete components and why?
0
How can I switch power between two hard drives using transistors?
0
Find v1 and v2 of a summing amplifier when it is in series with another Op-Amp
1
Op-amp DC multiplier
2
Differential-output op-amp vs. additional inverting op-amp?
2
How to add a low pass filter to this non-inverting amplifier circuit?
3
Question about differential signals as input of an operational amplifier
4
DC coupled amplifier circuits