How many times can flash be rewritten before an erase is required?

With flash memory, it's only possible to write by clearing bits from their erased (set) state, and the only way to set a bit is to erase the region containing it. If you only need to clear bits, then you can hypothetically rewrite a section of flash up to as many times as there are bits in that section before needing to erase it. However I've noticed that Atmel's SAM-D parts specify a stricter limit on this. Section 37-12 of the SAM D21/DA1 family datasheet:

Note that on this flash technology, a max number of 8 consecutive write is allowed per row. Once this number is reached, a row erase is mandatory.

I've looked through a few other datasheets for other MCUs and some flash memory ICs, and so far the SAM D21 datasheet is the only place I've seen a limit like this specified. Since the Atmel datasheet gives this only as a note and not as a qualified specification, I'm not sure if this limit is based on worst-case conditions (such as voltage, temperature, or number of cycles). I suppose that this limit can vary with the specific technology used (hence the mention in the Atmel note), but in that case I don't know what specific characteristics of the D21 flash imposes this limit.

I don't expect it's reasonable to expect that you can actually clear every single bit in a region individually, but if there is a general limit on the number of rewrites before an erase is required I've not been able to find a reference for it.

There is clearly a lower bound on this, which is imposed by the way that flash is generally organized: specifically the fact that the minimum size that can be erased at once is generally a multiple of the minimum size that can be written at once. For example, the aforementioned SAM D21 writes per "page", but erases per "row", and since there are four pages per row, it must be possible to write to a given row at least four times before an erase is required if all of the flash is going to be used at once.

Beyond this lower bound, in the absence of a clear datasheet specification, is there a general rule or guideline for the minimum or maximum number of times a portion of flash can be safely rewritten between erases? What if any, specific characteristics of the memory technology would influence this limit?

Edit to clarify: I'm not concerned with overall write/erase endurance here, that's typically well specified and separate from the rewrites-per-erase spec I'm asking for. And for the purposes of this question, we can assume that any rewrites are within whatever write size the flash supports.

I've had recent experience with the Samsung K9F8G08UXm. This is an 8 Gbit device organized as follows: 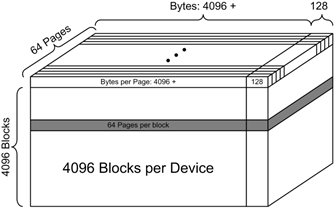 The device is erased on a block basis, or 64 pages at a time.

Not the answer you're looking for? Browse other questions tagged flash flash-memories or ask your own question.

2
How to overwrite flash memory on STM32L series
19
Flash memory: Does the entire page need to be erased before writing just a few bytes?
1
How does the PIC's PMCON1.WRERR bit actually work?
1
What operations on flash(NOR/NAND) effect Flash Program/Erase(P/E) cycles
0
STM32F1 Flash erase not erasing
0
NOR Flash Memory Full chip vs Block vs Sector Erase
0
STM32G474 not erasing flash by page?