I verified the the DC bias point of the transistor to be operating but for some reason the oscillations don't show up. Below is my circuit built on LT spice. Any tips to help me achieve a variable RC phase shift oscillator? 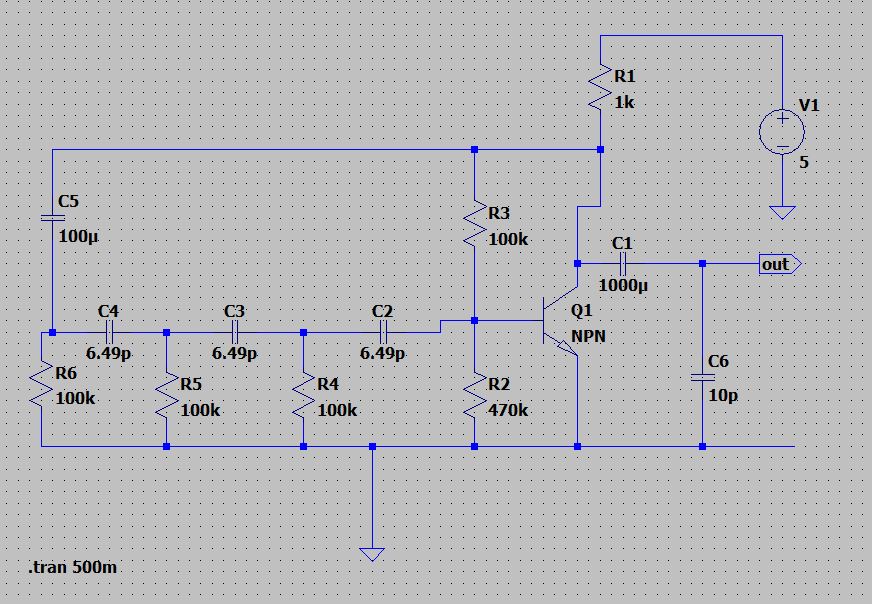 Your transistor operates at about 2mA, thus reac is 13 ohms.

Which in parallel with the final 100K ......... produces problems of phaseshift and attenuation.

Additionally, the input capacitance is set by Miller Multiplication.

With typical bipolars having Cob of 10pF, the Cin is 800pF, not at all appropriate for a 3-stage phase shifter with 7pF.

To reduce the input capacitance (to reduce the Miller Multiplication), introduce a 2nd bipolar atop the first; bias that base to +1 volt, and bypass that (new ) base with 0.1uF because at 100,000Hz the Cob of 10pF? will easily move that base up and down. This (2nd transistor) is called Cascoding.

To improve the Rin, use the ideas suggested in the comments , inserting 10KOhm resistor in the Emitter to Ground. To work with the 100,000 ohm phase shift resistors, you need 1Megohm??? and that requires beta * 100K = 1Meg. This high value of Re requires rethinking all the biasing.

Not the answer you're looking for? Browse other questions tagged transistors analog circuit-design oscillator phase-shift or ask your own question.

6
How to calculate the frequency of oscillation of this low-pass phase shift oscillator?
0
Low Pass Phase Shift Oscillator