I'm trying to build a kind of tea leaf blower (the machine will blow cut tea leaves.) I bought a car air conditioner blower fan (link below) and I connected my blower system (technical drawing link below.)

There are 13 nozzles on the tube. Each nozzle is 20 mm in diameter. The tube is 1 meter long, the tube diameter is 70 mm tapering to 40 mm beginning to end.

What I tried and the results: 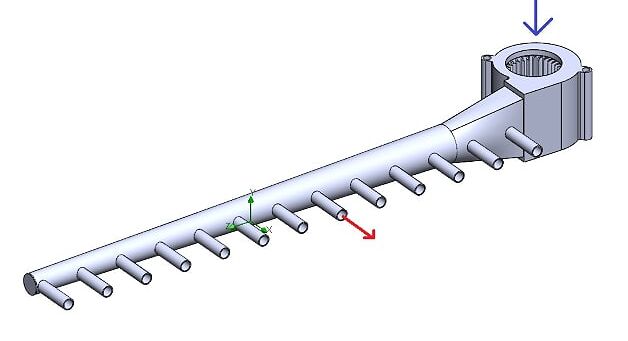 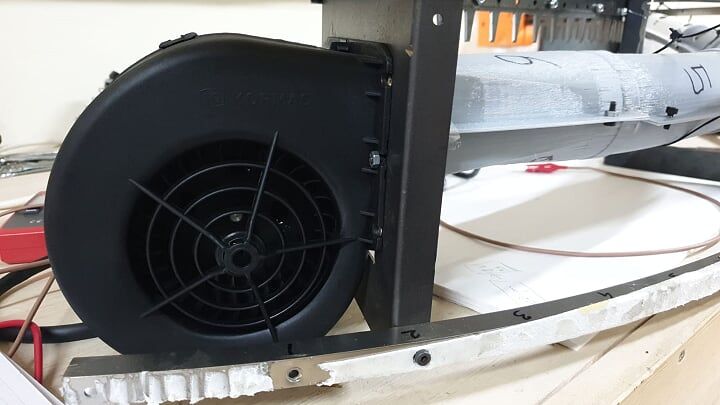 It's normal for a centrifugal fan like you have to speed up as the exit is restricted. This means you've reduced the mass of air passing through the fan, the motor is doing less work on the airflow, so the load on the motor is less, and so the speed increases.

If the motor is intended for car use, then 14 V is a reasonable voltage to run it on long term, this is the voltage at which cars tend to charge their batteries. While it will run for a while at 18 V, that's not recommended if you want the motor to last.

The fan you have bought is a high-speed low pressure fan. You'll notice from the fan datasheet that the blades are canted forward. Any stall in the output airflow will radically reduce the output pressure. You can turn speed into pressure with a flare from the fan to the plenum.

The nozzles you are using, with their small cyclindrical section and their right-angle connection to the plenum will generate a high back-pressure. You need to design the airflow into the nozzles from the plenum more carefully. Amongst the many things that may help you increase velocity after the nozzles are

Not the answer you're looking for? Browse other questions tagged dc-motor fan or ask your own question.

2
Which electro motor to use for steering a kite? (guestimation marathon)
6
What is the symbol for a Fan on a circuit? Is it just Motor?
2
Blower (Fan) Capacitor on Water Cooler
1
Need Wiring Help For Aircon Blower Fan
0
How to wire AC motor for old fan?
0
Advice on electronic circuit design for an agricultural machine
2
Issues with kitchen fan - how to salvage?