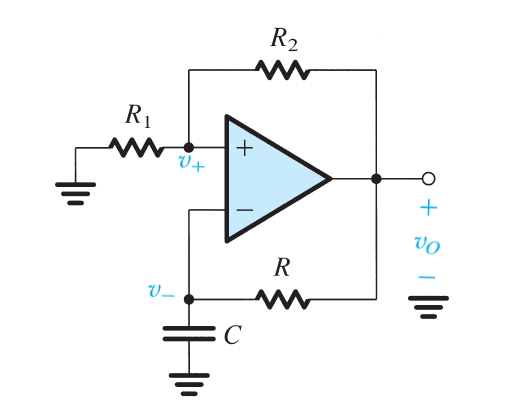 The Sedra book says that it's a Schmitt trigger, so there is positive feedback, but why doesn't it have negative feedback as well?

Sedra book says that it's a Schimitt Trigger

The circuit is a Schmitt (after Otto Schmitt) trigger with an added R-C, to make an oscillator. R2, R1, and the op-amp form the Schmitt trigger.

The circuit belongs to so-called relaxation oscillators in which the voltage on a capacitor "travels" between the two thresholds of a comparator with hysteresis ("Schmitt trigger").

There is no negative feedback in this circuit; there is only a positive feedback during the insignificantly short transition time (I mean the phenomenon and not the physical connection between the output and inverting input). During this extremely short time interval, the voltage at the inverting input practically stays constant (the voltage of a charged capacitor cannot quickly change)... and the transfer ratio of the RC feedback network is almost zero.

To observe the feedback phenomenon (both positive and negative), the amplifier must operate in a linear mode (its output voltage must not have reached the supply rails). Here this is valid only for the short moment of transition. The rest of the time the output voltage is constant (positive or negative)... and the op-amp output simply acts as a DC voltage source that charges/discharges the capacitor through a resistor. In other words, "the amplifier is not an amplifier"...

Not the answer you're looking for? Browse other questions tagged operational-amplifier schmitt-trigger negative-feedback or ask your own question.