How to prevent short circuit between output pins

I am trying to hack some signals coming from an old computer going to a Floppy drive using an ATtiny1614 microcontroller. Normally the computer has full control of the signal lines but at some window in time, the computer is decoupled and MCU takes over. 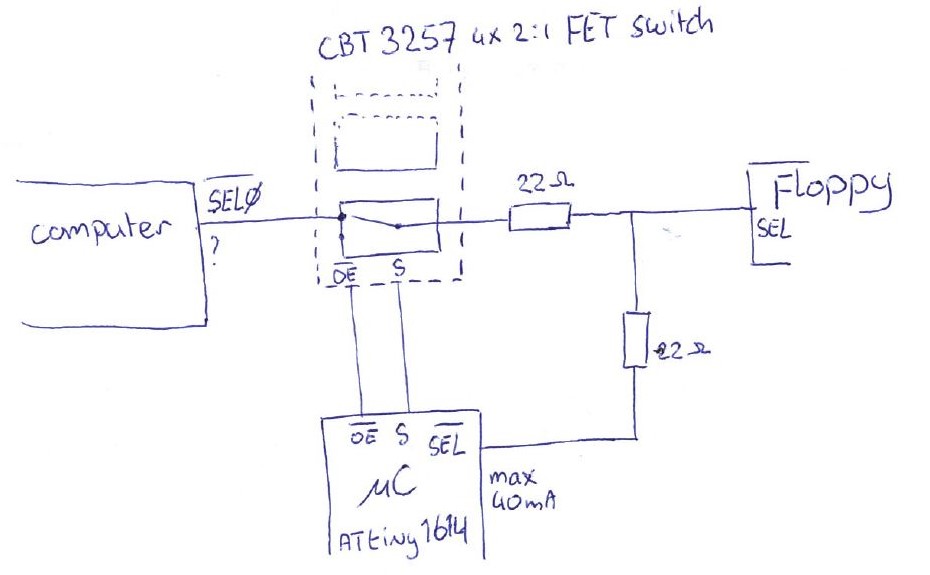 The signal lines (I am using 4, but for simplicity I have drawn only one) are cut off using a CBT3257 FET 4x 2:1 (de)multiplexer as not to disrupt the original timings, since it's high speed. Switching is controlled by the MCU pulling the output-enable (_OE) on the switch high which turns the switch output to high impedance, then making the SEL pin on the MCU an output.

If there is a bug in the MCU software it can occur that both the switch and MCU outputs are enabled, which then can short.

What can I do to protect the circuit in case I mess up the software?

Preferably using fairly inexpensive components, and not too many. I would like to avoid another IC.

I have access to an 8 port logic analyser with digital (I assume CMOS level) inputs and an analog Scope (so no memory).

Connect one of the input signals to the Computer and the other to the MCU rather than as you have shown. Even if the software does not function correctly you can never have two outputs shorted together.

Bus transceivers like it are specifically designed for this exact purpose.

The downside is that they're half-duplex, so you can't use them in both directions at once, though you can mix the port-A and port-B connections to the microcontroller and use it with mixed directionality that way.

Not the answer you're looking for? Browse other questions tagged short-circuit output ttl attiny timing or ask your own question.

2
noise caused by square wave signal
0
How to avoid short circuit when connecting a microcontroller and device using I2C bus?
0
TTL signal: output impedance, overshoot and other characteristics
0
Automatic and manual clock managing. Errors with ring counter but not with 4-bit counter
0
short circuit on the output of a linear voltage regulator
0
Modbus acquisition timings
1
Trigger TTL input signal with a micro switch
1
How to interface MCU with open-collector output?