Art of Electronics, Second edition pp. 73-75 — question about pull-up resistor and the logic of current setting

Edit: As you can see in the comments, I got a great explanation about the pull-up resistor question. I also wanted to make more of a bullet point of the PNP question as follows:

When it comes to setting the current in a PNP circuit (like a current source or emitter follower), is the procedure the same as for NPN, i.e. base voltage determines emitter voltage (as long as Vee is high enough), which will be a diode drop higher that the base voltage, then the emitter resistor is chosen to set the current based on that and I=V/R? If so, why does the voltage stabilize at that level? It seems that Iec is bringing Ve down from Vee, but why would it stop at Vb+.6V? I could imagine the transistor constantly turning off and back on.

I was really grateful for the answers to my last question and am hoping not to wear out my welcome by asking about everything I come across, but this question involves something that has confused me all along in reading this book, which is the logic of setting voltages and currents in transistor circuits, and another issue is what is meant by pull-up resistor in this context.

On pp. 74-75 (see attached image), the authors state that R3 in figure 2.23 is a pull-up resistor for Q1. First of all, I don't think they ever introduced the concept of a pull-up resistor in the foregoing, but putting that aside, I'm not sure how this is a pull-up resistor or why one is needed. I think I must not know what the term means -- when I look it up, the definitions usually have to do with logic levels and using resistors to tie a node to either ground or +5, and that makes sense to me. It doesn't seem as though there is any shortage of either voltage or current in that location, and although I see that Q2's base is drawing current from the emitter of Q1, it doesn't seem as though it would be enough to cause any deficiency. What am I missing?

Trying to understand that comment led me to think about how a PNP transistor circuit is set up and how often the logic seems confusing (to me). In the NPN circuits like the emitter follower and current source, the base voltage is supposed to set the emitter voltage, then the drop across the emitter resistor determines the current according to ohm's law as in figure 2.22 A and B. This seems to make sense, since the emitter should be at ground (in these examples) before voltage is applied to the base, and then the applied voltage overcomes the diode threshold voltage and the emitter is separated from ground by the resistor, allowing the voltage to rise to VB-.6V.

But when I look at the 560 Ohm resistor, I think, well, that would create a 1.2 Volt drop if the current were 2ma, OR it would produce a 2ma current if the voltage drop were 1.2V, but can it really set both values at once?

Now that I think of it, I guess that with no emitter resistor, once the transistor is on, a giant current flows to the collector, and that will destroy some components. But as long as there is any resistor on the emitter, the current flowing to the collector will cause the voltage to drop to VB +.6V, and that is how the voltage is set to allow the resistor value to be the determinant for the current. Does that sound right? And if so, why doesn't the voltage drop any further and cause the transistor to constantly turn on and off? 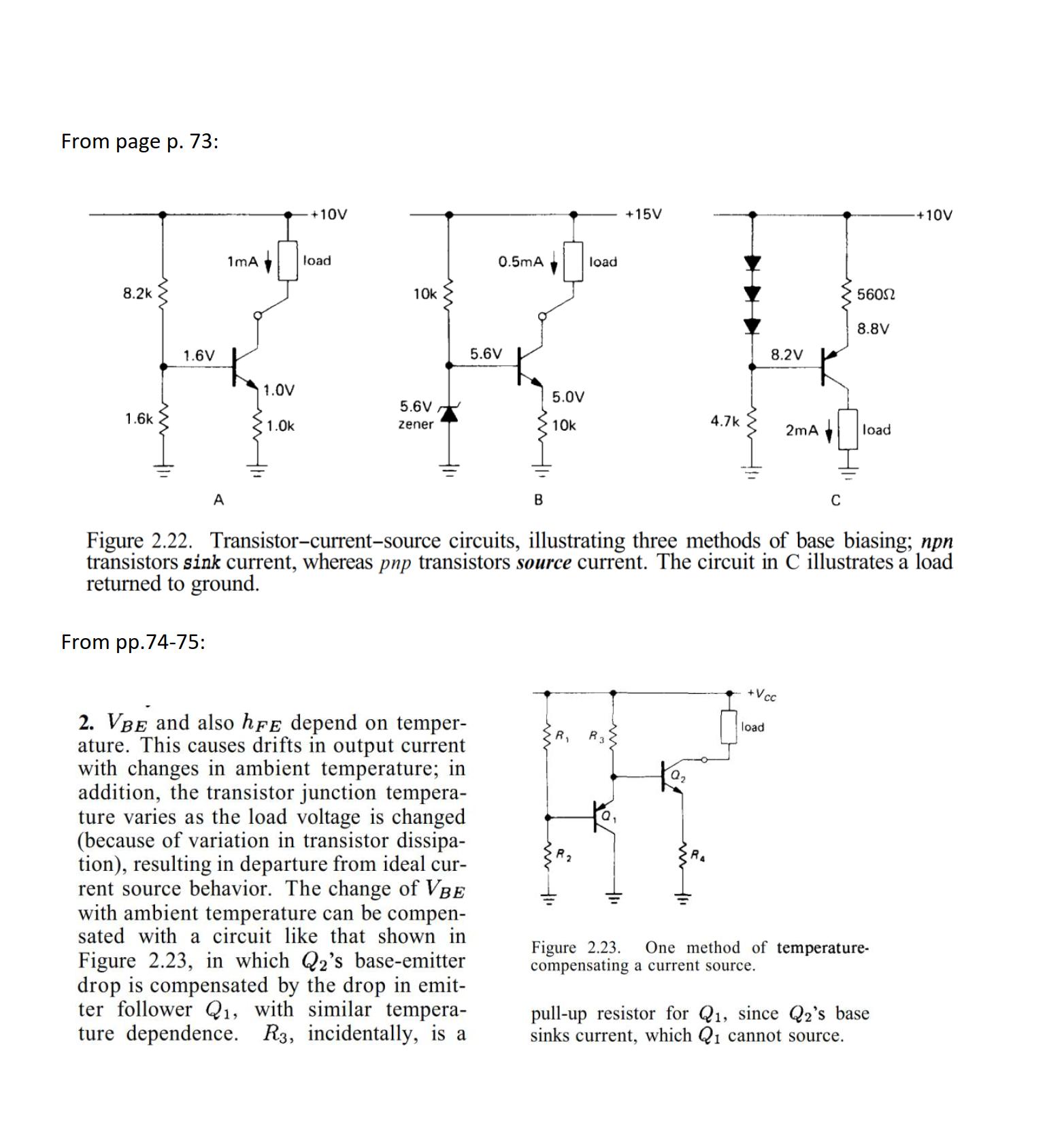 Browse other questions tagged transistors current-source pullup pnp or ask your own question.

1
Pulling a pin to 12 V using 3.3V
3
Voltage at common node in transistor
3
How does the pull down resistor work in this circuit?
2
What is “pull the collector below ground” and saturation
0
how to determine resistor value calculation for common anode 7-segment display multiplexed
1
confused about pnp transistor current flow
0
Does a PNP transistor pull up itself?
1
Question about a point made in Art of Electronics
1
Calculation of base current and what decides the current through collector-emitter branch
0
Art of Electronics 2nd edition p. 67, figure 2.8 — what causes the clipping?