I've heard that opamps are not good at driving capacitive loads. Let's say I want to add an RC antialiasing filter between the opamp output and the ADC. Is 0.1uF big enough to cause trouble? Where can I find/calculate the capacitance that I could add without getting the opamp into oscillation? Is this in the opamp's datasheet? 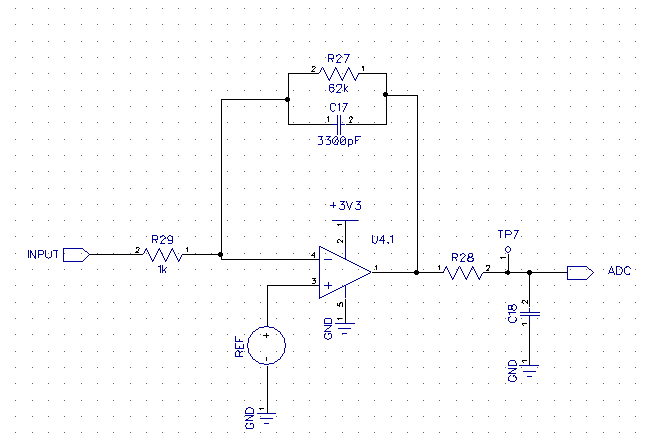 I've heard that opamps are not good at driving capacitive loads

"I heard" is practically always an indication that you could have posted a reference, or researched further.

However, no doubt, it's hard to drive a capacitive load with anything that relies on negative feedback; if you're not sufficiently dampened, you will start to oscillate.

Let's say I want to add an RC

The R in RC makes your load not purely capacitive.

Choosing the R large enough and the C small enough is sufficient to make this work in almost any situation – driving an RC low pass is one of the most classic uses of an opamp.

Is 0.1uF big enough to cause trouble?

Can't tell you. Depends on your resistor, and your signal's frequencies, and your load, and your power supply. If in doubt, an s-Domain control system analysis will help you.

Realistically, unless you need really low cut-off frequencies, that value is certainly at the higher end of being useful, as getting exact capacitors for larger values gets costly. Don't forget that the cut-off-frequency of your RC filter doesn't change when you reduce your C by a factor x and increase the R by the same x. You really shouldn't drive any significant load with the output of your RC filter anyway – that'd make it a loaded voltage divider with different characteristics!

Often, you'll see a separate ADC-driving opamp added after the RC filter so to not load that. But while that additional amplifier can make things more linear, it is also an additional source of noise. Now, whether that noise matters at all: Can't tell you. Is that a 24 bit 100 Sam/s ADC for cryogenic sensing or is this a 1 GSam/s 6 bit ADC for RF sensing?

I think ADI's chapter on Interfacing to Data Converters, the Driving analog ADC inputs subchapter will be interesting to you. You'll find that basically, you'll need to make sure that the equivalent ADC input pin impedance is significantly larger than your R's impedance to avoid loading the RC filter (which really is a voltage divider). For fast signals, you'd do something else alltogether – impedance matching – but I don't think you're doing RF.

5
Stabilizing opamps - am I doing it right?
2
How can you guarantee stability of an inverting opamp configuration amplifier?
5
How to stabilize a control loop for an opamp-based linear regulator?
0
Prevent loss of Large Signal Voltage Gain at low Rload
2
Cascaded vs. non-cascaded bridge-tied load circuits using opamps
3
how do I stabilize opamp amplifier oscillation
0
How to configure an opamp for differential mode to trip an NPN?
1
Confusion with a measurement method suggested for an opamp input impedance
3
pH sensor buffering, gain, and offset with one inverting opamp
2
Driving a difficult load with an Op-Amp: high capacitance, high current, high speed