I'm confused as to the exact definition of ground loops. It seems to me that there will ALWAYS be a ground loop if you have:

You now have a loop in the safety ground wires and the ground of the data cable. Is this a ground loop?

Or is something only a 'ground loop' when the two devices are connected to two separate ground rods and noise/EMI currents passes THROUGH the ground-rod, through the earth and out the other ground-rod?

In more exact terms: does a ground loop always have planet Earth in series?

and couple it in some form (usually by linked flux) into the circuitry that is part of said loop.

For the capture to take place, it does not have to involve a ground plane, a ground wire/trace or an earth ground, but when it does, we call it a ground loop.

The larger the area within the loop, the more pronounced the effects. The length of the loop often plays a role because a small amount of spacing between the conductors of the loop can form a large area if the length of the conducting paths is large enough. It helps to keep conducting paths close to each other, and to twist potentially looping pairs of wire to keep the capture area as small as possible.

Often one part of the loop is formed, as in your drawing, between disparate equipment, through their power lines, through the common ground of any signal wires between them, or the earth grounding of the chassis. We then say that the loop is closed through the grounding, or -in some cases- through earth.

This case is illustrated here: 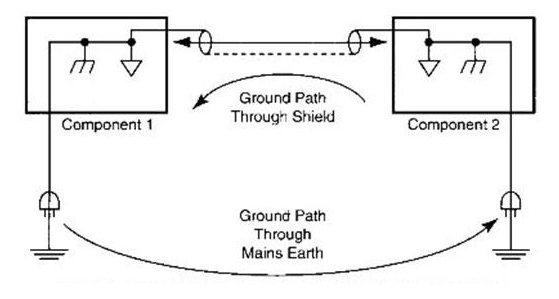 When the supply ground or the earth is involved as a loop path, the loop area is generally large, which is why this kind of loop is most notorious.

To be clear, earthing the ground plane at one point only does not form a loop through the earth. Also, the ground loop does not have to pass through earth to cause havoc.

The source of the interference can be close by, as a local wire, a radiating capacitor, PCB traces with analog/digital signals etc... or it can be far away as an AM radio station or a power line etc...

Sometimes we deem any cause of humming or buzzing from extraneous sources a ground loop, but it is not necessary for these effects to require a loop. Protruding conductors (such as a human body) can also function as an antenna and capture unwanted signals.

A ground loop is not to be confused with an unstable ground plane.

When a sufficiently high current passes through a ground plane/trace or some other grounding conductor, it can cause a voltage across that plane. In parts of the circuit where the ground is used as a signalling reference, the fluctuating ground potential is observed as noise added to the signal.

Notice the unstable ground on either side, if there is a current flowing through the earth (or equivalently a ground plane). The mass or ground for the left circuit may be at a different potential from the ground of the right circuit. And if that difference is time varying (pulses, cycles etc.) then it will appear as interference, hum, noise etc.. in a signal traveling between the two.

Arguably this can be called a loop too, because the instability is caused by a looping current. But pretty much all currents loop (exceptions are in-rush and ESD). I think it's useful to recognize loop capture and shared conductance as separate phenomena.

Star shaped grounding aims to avoid this cause of interference by avoiding shared current paths. 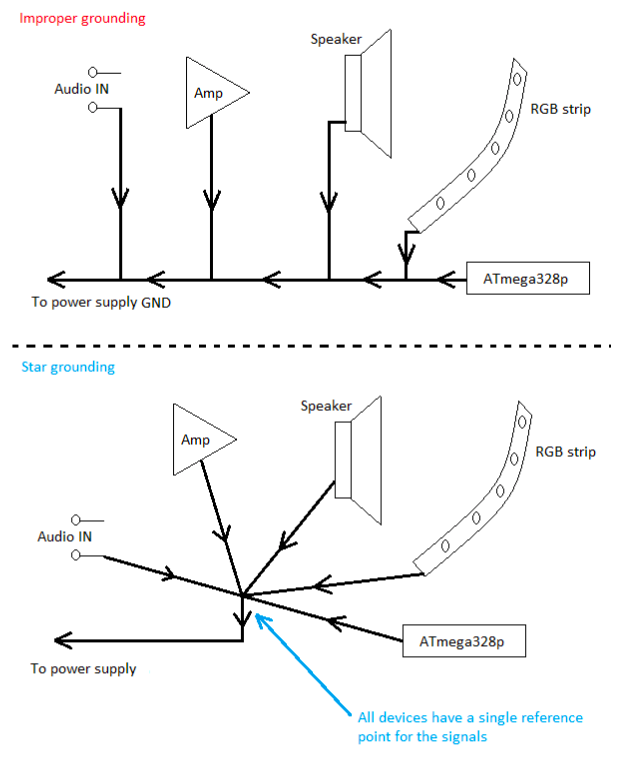 Differential signalling can be employed to mitigate the effects by avoiding the ground as a signal reference. Notice how the differential circuit on the right does not require the ground as a reference. Any ground bounce does not affect the signal. Another benefit of differential signalling is tight impedance control along the trace or wire, but that is a separate motivation, which usually applies to high frequency signals.

does a ground loop always have planet Earth in series?

No, you can get ground loop problems on land vehicles, aeroplanes, rockets and space stations. A problematic ground loop is caused when ground current passes through (in part or wholly) through a wire or circuit it's not supposed to and causes something to malfunction whether it's buzzing in an amplifier of burn-out.

I've seen Ground Loops in vinyl phonographs, where the motor is driven from a speed controller (pulse generator, with potentiometer to adjust speed), and the small power transformer for the motor has some primary-secondary 100pF coupling thru the fishpaper.

That charge will find a path (or multiple paths, proportional to the conductance) back home, which in this case is the 117 VAC power line.

Not the answer you're looking for? Browse other questions tagged ground-loop or ask your own question.

2
Where should I connect power ground and control ground for a switched power regulator?
3
Do you always need a separate ground for the power part and the signal part
1
Eliminating ghost voltage and breaking ground loops in a system
1
Grounding audio circuit for RFI immunity
0
Ground loop- Why would current flow between 2 earth grounds when signal return path offers the least impedance?
1
Eliminating an earth / ground loop in an A/V set-up
1
Why does this connection not become a low impedance between Positive (Isolated system) and Ground (Earth)?
0
How did using the shield as signal return end up as a common practice in audio?
1
common ground issue in signal transmission?