I am trying to build a weather station, powered using Power over Ethernet. Originally I planned to use a Nanode as the microcontroller, but since the Raspberry Pi is so cheap, I decided it was much easier to use that instead.

I bought a TP-Link power over Ethernet splitter, made up some custom cables and after checking the voltages, connected it up to the Pi. All worked fine, until I tried plugging in the HDMI cable to my TV (for debugging). At which point the board kept turning off and then the switch cut out.

At that point I discovered that there was a 40 volt difference between -ve on the PoE output and the ground on the HDMI. I tried a couple of other PoE boards and found there was the same issue on them too.

Is there a solution? Although I don't really care about plugging it into my TV, I am a bit worried about plugging sensors in, that might be grounded and end up putting big voltages across them. 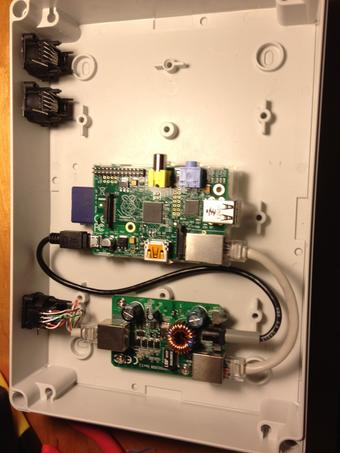 TP-link power splitter I managed to find seems to be non-isolated. Bad thing for you is that PoE usually have diode bridges on input (to be polarity-independent and work on straight or X-cables) meaning that if your 48VDC supply is not galvanically isolated and for instance it's minus terminal is grounded, sparks can fly if you miss to crimp ethernet cable right way. Try to swap 4,5 and 7,8 pairs, measure ground potential difference again.

Of course, for careless PoE usage best solution is to use isolated splitter.

I just checked the standard and PoE is supposed to be isolated at both ends (switch and device, section 33.4.1, since at least 2008).

So it looks like TP-Link are cutting corners with their PoE devices and omitting isolation circuitry to reduce cost, violating the standards. I purchased an isolated DC-DC converter from an electronics supplier (in my case a Tracopower TEL 5-1211) and soldered some connectors onto it. I installed it between the TP-Link splitter and the device I wanted to power, and it solved the problem.

PoE does not necessarily have to be isolated, so it may be the case that your TP-Link isn't. (Although it seems to me they'd want to sell isolated versions so they would be more foolproof/robust...)

If your PoE device has no outside world/user connections, then you can safely use a non-isolated scheme. Since you are connecting HDMI to your TV though, that counts as a user connection and you really should be using an isolated splitter.

Not the answer you're looking for? Browse other questions tagged ethernet raspberry-pi groundloops poe or ask your own question.

0
L7805CV 5V Voltage Regulator to IP camera over POE
2
Powering multiple devices from a single supply with 48V
0
Power over Ethernet: AC?
1
Eliminating an earth / ground loop in an A/V set-up
1
Protecting RPi against lightning and high voltage
0
240 VAC power over ethernet?
3
how to make an obfuscated network cable
0
Difference between the two Ethernet magnetic topologies
2
Passive Ethernet-over-coax converters... how do they work?