I'm trying to clock a BBD (Bucket Brigade Device) circuit (for example the MN3007) from a microcontroller output. However, the circuit requires a complementary negative clock, i.e. CP1 is \$-12V\$ to \$0V\$ and CP2 is \$0V\$ to \$-12V\$ (for \$\mathrm{VDD} = -12V\$). The transition time for the clock is specified as less than 500ns, although I'd prefer to be well below that since apparently the clock signal directly drives the BBD transistors, so a slow transition increases non-linearities. Further, apparently the output should have reasonably low impedance, as the clock IC usually used with these types of BBD's (such as the MN3101) advertises about \$2mA\$ output current. Yet worse, the datasheet specifies that the clock cross point, i.e. where the the two complementary clock signals cross, should be between 0V and -3V, so a perfectly symmetrical drive won't do. One last technical requirement is that the that the clock voltages should be as close as possible to the rails, since those limit the signal swing (looking at the datasheet, the clock directly drives the gates of the switching transistors).

So, to summarize, your mission, should you choose to accept it, is to

point me to the right direction for designing a circuit that:

Possible trick to use:

One way that could make life a bit easier is that I could just as well hang the BBD between the +12V and 0V rails, instead of 0 and -12V. This would mean that the clock levels would instead be +12V and 0V, and the crossing point would be between +12V and +9V.

Let me post one answer which I figured out. This is reasonable, but not perfect yet: 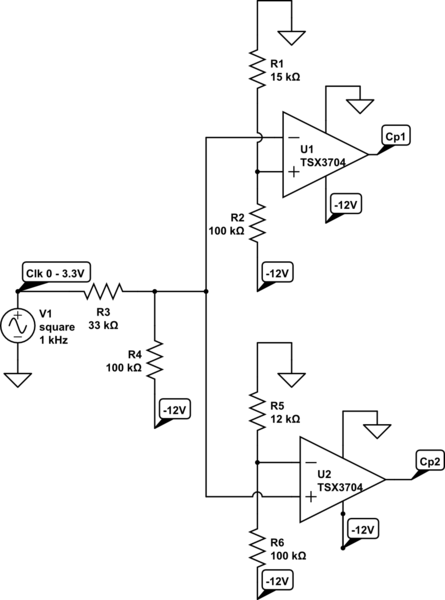 So this is really just a reasonably trivial implementation with a comparator, and using the TSX3704 quad, the cost is about 35 cents + 4 resistors per clock (the thresholds for the comparators can be shared... actually I can save one further resistor by sharing the voltage divider string for the two voltages shown, so 3.5 resistors per clock). Further, I have a choice of the SOIC-14 package which is huge but wave solderable, or something smaller if I fail to keep everything one sided.

So how do I fare against my own criteria:

I'm still interested in other solutions, I wonder if there's still some room to improve on the parts count/cost and especially the size of the very big SOIC-14. Maybe at the expense of the transition time which is now over spec by about a factor of 50.

Not the answer you're looking for? Browse other questions tagged clock level-shifting or ask your own question.