How to calculate maximum input power on a speaker?

I got into this rabbit hole while trying to replace the speaker wire in my setup. I have speakers with 8 Ω of resistance (Rspeaker) and a maximum input power of 140 Watts, so I wanted wires that would not exceed 140W when considering their gauge and length (looking for 10-16 feet).

I found a table at this site: https://soundcertified.com/what-size-speaker-wire-guide/ which displays the maximum power in the system for the given length, gauge, and speaker resistance. Cool, right? I was able to estimate what I need from it, and for fun I decided to back-calculate the table so I could plug in the different lengths I was looking at and see what gauge would work.

I created the following spreadsheet which shows the given table from the website, a matching table based on the calculation I determined was used, and some various values. Spreadsheet to look at the expressions: https://1drv.ms/x/s!AqQjhMOX3aoJ-RN2iS2C_NCIKuKw?e=dVOrqG, image is attached for initial viewing.

Quick overview of the spreadsheet: the initial table uses feet for the length and gauge for the area. In my calculated table, since I had to use resistivity (Ω*m), I converted that to Ωmm, and all the distances to mm and area to mm^2. The table has four values, each corresponding to a length, for every resistance and area (Ohm and Gauge) pair. At the bottom is the value for the resistivity of copper, the equation for resistance in a wire, and the equation for power as a function of voltage and resistance. I also included the voltage from my system (assumed maximum since volume level will control it).

Figuring out the calculation: Because the values in the table are supposedly wattages, I decided to start with the equation for power using voltage (something I could easily assume and change) and resistance (known) versus current. The total resistance is the sum of the speaker resistance plus the wire resistance (a relatively negligible value) since they are in series (I did the parallel calculation for fun as well and it's an inverse relationship obviously). These wattage values, however, are completely different from anything in the table (~1700W for 8Ω, 20 gauge, and 120V), and the various values per length are very similar because wire resistance is negligible (a pretty obvious conclusion).

So what are the values in the table? After messing around a lot I stumbled upon the relationship: Rspeaker/Rwire. It's the ratio between the resistance of the speaker and the resistance of the wire, which is why the values vary so much considering the small Rwire values. But, this means the values in the table are dimensionless, and not wattages at all! A way to get that relationship is Pwire/Pspeaker (voltages cancel out), but I don't know why this would be done or why the ratio would be useful.

On top of that craziness, the table values and determined relationship are still on the correct order of magnitude for input power into the speaker, and supposedly they make sense (if I assume they're wattages, for my system, 16 gauge wire can be used for 16', and if I want shorter wires I should use 18 gauge to not exceed 140 "watts").

Questions: If the values are dimensionless, how are they supposedly useful for comparing wattage, or it it some fake relationship? If the power calculations that were ~1700W are accurate, why does my speaker have a max input of 140W? Is there a better or proper way of determining this for future reference? 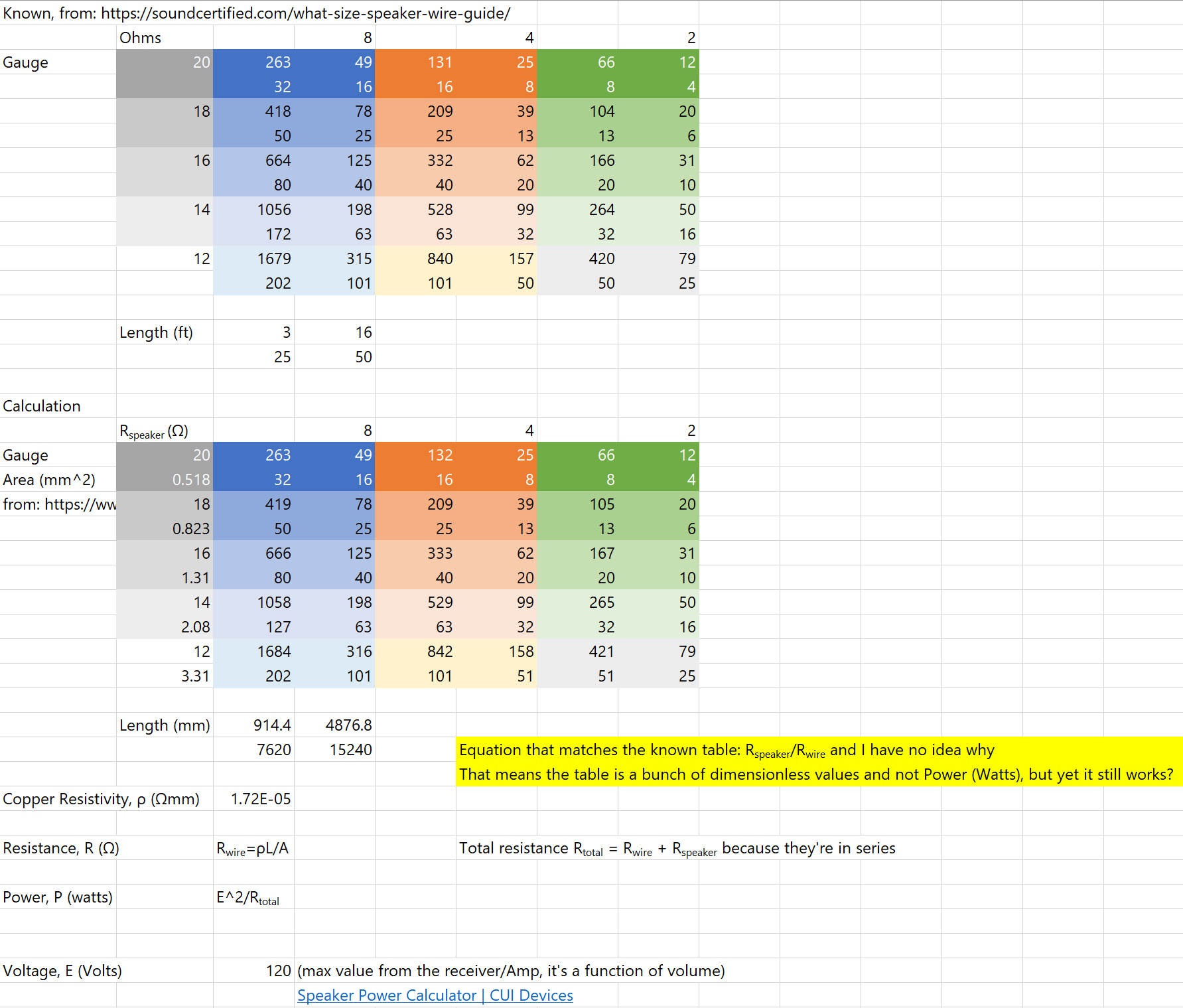 The ability of speaker wire to carry the current involved is rarely much of an issue except a few quite unusual loudspeakers. The most notable in this regard was probably the Apogee Scintilla, with a rated impedance of one (1) ohm. That extremely low impedance translated to low voltage and quite high current. But, those are still remembered (thirty years later) primarily because they were uniquely difficult to drive, in large part specifically because of that exceptionally low impedance.

With most reasonably normal loudspeakers, the motivation behind keeping the impedance of speaker wire extremely low is completely different. The real reason is that the amplifier can play a significant role in damping the speaker.

Consider what happens when you play some music with, say, a loud "thump" on a bass drum. That translates to a fairly short transient signal being sent to the loudspeaker. That, in turn, moves the cone of the loudspeaker. So far, all is fine and well.

But then we get to part two: as soon as that transient is over, we want the speaker cone to quit moving. But a speaker cone is a physical thing with inertia. Once it starts moving in a particular direction, its tendency is to keep moving that direction.

But, what started it moving was the magnetic signal in the voice coil interacting with a static magnetic field. Once that incoming signal stops, continued movement of the cone actually generates electricity in the voice coil.

Doing a quick check, the specs you've chosen (16 gauge wire for 10 feet) works out to 0.04 Ohms of DC resistance1 (0.08 for the total of 20 feet for the round trip). While 16 gauge wire is certainly plenty to carry the current involved, that resistance is high enough that it probably has at least some effect on the damping of the system as a whole. If your total round trip is 10 feet, a 10 gauge wire gives a resistance of 0.01 ohms. If you're talking 10 feet distance (so a total of 20 feet of wire), you'd need 7 gauge wire to meet the same target.

In fairness, the difference between the two certainly won't be obvious, and depending on the amplifier you're using (specifically its output impedance) it may be essentially irrelevant. On the other hand, especially if it has particularly low output impedance, it could make a bigger difference.

1. In theory, we should care about impedance, not just DC resistance. In this case, however, we're mostly concerned with the part of the signal that goes to the woofer. That's usually restricted to under 1 KHz (and often less than 500 Hz), where the impedance of a wire is usually very close to its DC resistance. Also: thank you to Bruce Abbot for pointing out that as originally posted, the resistances/gauges needed that I quoted were wrong.
Share
edited Nov 30, 2020 at 8:46
answered Nov 30, 2020 at 0:25

I looked at the chart where you obtained your information https://soundcertified.com/what-size-speaker-wire-guide/#Speaker_wire_power_size_chart, and I was not impressed. To calculate the wire gauge you need, first, calculate the current you expect to flow through the wire. The formula \$I=\sqrt{\frac{P}{R}}\$ can be used for this calculation. For example, if you expect to have 140W continuously going to your speaker, which is at 8\$\Omega\$, your current would be \$I=\sqrt{\frac{140W}{8\Omega}}=4.183A\$. Note, that whatever your amplifier's rating (or your speaker's rating) it is unlikely that you will actually be feeding that much power to the speaker over a sustained period. So, you can probably get away with the assumption of a smaller current. However, if we choose to be conservative, we can use the 4.183A value.

Then we look up the wire gauge that can handle 4.183A. We see in a wire-sizing table (for example https://www.powerstream.com/Wire_Size.htm ) that 15 gauge wire will handle 4.7A. Note, this gauge wire will handle 4.7A, whether the wire is 3ft long, or 300 feet long. As others here have noted, you can probably get away with 16 gauge, 18 gauge or even 20 gauge because your will probably not be using 140W continuously, but how much of a derating you wish to make is up to you.

Now, the table you provided says that for 3ft. lengths you have one "power" (actually current) capacity, and for longer lengths, you have significantly lower capacity. That is where I take issue. Yes, for longer lengths, you will lose more power in the wiring. But, for practical purposes, you can neglect this. It is simply wrong to assert that a 3ft 16 gauge cable will handle 664 watts into an 8\$\Omega\$ load, while 16 ft of the same cable will only handle 125W, and 25ft only 80W.

As already mentioned, a 140W setup will actually drive 140W only at peaks and will be significantly below that for much of the time. At those peaks, however, you’ll want the cable resistance to result in as small a voltage drop as possible - the speaker is only 8 ohms and so even 1ohm of cable resistance will cause a significant loss of output power, and more significantly will result in loss of sound quality through distortion and reduced damping factor. Skinny wire will work, but a big cross-section will make a noticeable difference. Back in the 80s we would use 79-strand to the tweeters and separate 30A AC cable to the woofers. I’d suggest trying a couple of sizes and see for yourself whether the difference is worthwhile.

I feel like you are overthinking this by at least an order of magnitude.

As you note, the resistance of the wires should be small compared to the impedance of the speaker. There are tables all over the web that will tell you the resistance per foot for different wire gauges, so this is easy to figure out.

Second, you want to use cables with sufficient current carrying capability ("ampacity"). Again, there are plenty of tables to give you an idea of how much current a cable can carry. The trickier part is figuring out how much current you really will send to the speakers. For normal audio purposes the average power is much less than the maximum power.

If you have a speaker rated at 140W I would think that 18 or 20 AWG would work just fine. Just use the cheap "zip cord" wire used for small electric appliances and buy it at the hardware store.

Not the answer you're looking for? Browse other questions tagged power resistance wire speakers gauge or ask your own question.

9
How to calculate voltage drop over and power loss in wires
1
voltage drop & resistivity calculation
0
How to calculate the maximum cable length of fire detection loop
3
Electrical resistance of two conductors of equal surface area in contact with another?
0
measuring resistivity of copper wire
1
How does the formula for cross sectional area accurately determine which gauge wire should be used without including amperage or voltage?
2
Best configuration for ethernet-as-speaker-wire?
0
How to balance resistance between speaker wires made of copper fabric?