(I posted a similar question that shows a better understanding of the circuit here.) I don't know if my reputation would suffer if I deleted this question.

I am learning the four negative feedback topologies. I would like to reach a point where I will be able work my way from expressions like \$A_f={A_o\over(1+A_oB)}\$ through algebra to more concrete expressions using component values (resistors, e.g.). My first attempt was with voltage-series negative feedback circuits and a simple common collector. I think I was quite successful. I was able to find good expressions for \$A_o, A_f\$ and \$v_{out}, v_{in} \$. From the expressions I derived I could see why we make approximations in analysis, such as \$v_{out}=v_s\$. 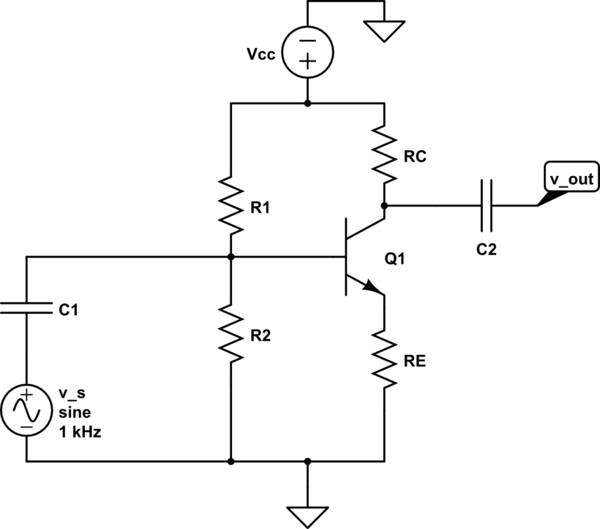 Then, I attempted to repeat the same process for current-series negative feedback, using a common emitter (with degeneration, not bypassed) as an example. Here's what I came up with for open-loop gain:

And for the feedback factor:

Everything looked good to me, and all my equations proved out in a simulator. But then, disaster struck as I read more about the current-series negative feedback. Must my work instead be based on this set of equations \$A_o = {i_o\over v_{in}}\$, \$A_f = {i_o\over v_{s}}\$, and \$B = {v_f\over i_{o}}\$? I can see how using these equations as a starting point would make clear that I am looking at a transconductance amplifier, not a voltage amplifier, but if my equations work, does it matter which I use? Is my understanding of current-series negative feedback sufficient?

Perhaps the shown block diagram can help to clarify the situation? (The last - most right - block should contain a minus sign).

In the diagram I have set Ie=Ic. Of course, we could include the base current into the diagram - however, this would not influence the feedback loop. Note the loop gain is Aloop=-gm*RE.

The circuit establishes current-controlled voltage feedback. (I do not like expressions like "series-parallel" or "parallel-parallel" or....because some authors are counting input-output and some others output-input. So it is somewhat confusing, I think).