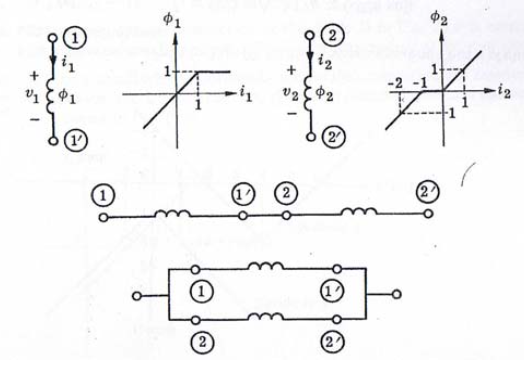 my problem is with the series one, i know that the parallel one, I know that the voltage on each one of them is equal so \$v_1=v_2\$ now i wanted to use the fact that \$ v=L\frac{di}{dt}\$ but first i dont know the \$L\$ and second i dont really understand how the time helps me, or how to get rid of it.

the series is i think i understood, since their current is the same then the total flux is the sum of the two fluxes and i will get the following 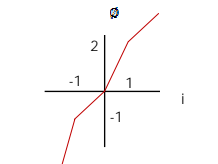 As the current increases the flux builds up in both inductors, which you correctly sum together giving a slope of 2 webers/amp. That is until inductor 1 saturates and no longer does increased current produce increased flux. At that point on the total flux will only increases from inductor 2 at 1 weber/amp. The behavior is similar when the current is reversed, as you have correctly shown.

I don't blame you for stumbling on the paralell case. In esence your being asked to imagine what two ideal inductors would do if supplied with a DC constant current source. Try that in a simulator I bet you will get an error.

To help understand what effects that can have I like to think of the following.

So let's relate that back to the amount of flux problem you have. My guess is the total flux will only change at the same rate as the "slowest" inductor. So looking at increasing positive current, the flux will increase at 1 weber/amp until one amp of current. From there the flux will no longer increase as inductor 1 is now saturating. That saturation "dominates" the total inductance of the circuit.

Not the answer you're looking for? Browse other questions tagged inductor homework non-linear or ask your own question.

0
Beginner: Inductors in Series and Parallel HELP
0
Series inductor as discontinuity in transmission line
5
Multiple inductors in series/parallel, flyback diodes required?
5
How does the magnetic field of an inductor affect the operation of a DC circuit?
1
Op-amp circuit hysteresis calculation
0
Calculate duty cycle of flyback converter
1
Understanding of coupling coefficient and power transfer efficiency
1
LTspice - Simulation of a variable inductance