I've asked this question a while back and user/Transistor told me that the circuit will be floating and drift without a common ground, he suggested a virtual ground. but in this case we already have a ground connection between two voltage sources via 3 series resistor.

To measure current on the low side of circuit, do we still need to have a common ground between V1 and V2?

If you are absolutely sure that there are no hidden paths between the power supplies and any part of the circuit other than what is shown, you will be OK.

Do the multimeters make a common ground with the source too?

Multimeters are designed to ensure that the condition just mentioned, of no hidden paths is met. So, they often have plastic cases and battery power.

In addition, because there are no hidden paths between power supplies, it is safe for the ground ("common" really, because it isn't connect to "ground") of the multimeter to be connected to the negative probe. This is probably done, though I certainly cannot guarantee it is done in every case. It is probably done, because it is safe (because of the "isolation"), and because it eliminates some unnecessary worry about accuracy and proper operation of the multimeter.

A problem arises when the assumption that the power supplies are truly isolated is mistaken. One may naively think a power supply is isolated, though it may not be. Even a very small current can disturb your circuit, as illustrated by the circuit below, in which 120AC "leaks" through a pair of capacitors between one rail of V1 and ground. 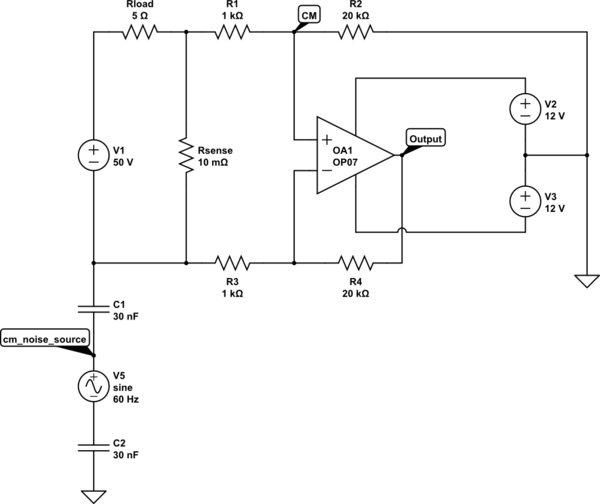 The output, and the node marked "cm" are shown here. The "cm" node is the common mode signal present at the inputs of the op amp (assuming the op amp is still operating in its linear region).

One can see that the output appears to be a solid 2V. However, the peaks of V_CM are at about 10V. If the capacitors were just a little bigger, the peaks of V_CM would reach the rail voltage of 12V. A little higher and the op amp will work incorrectly, giving unknown results at the output -- probably one of the rail voltages. (The simulation does not show this, happily treating voltages at the inputs which are above the rails as if nothing untoward was happening.)

How much current was required by the noise source to bring this circuit to its limit? Only 1mA peak. That may seem very insignificant compared to the 10A that is flowing through \$R_{sense}\$, but it clearly is not insignificant.

The details of when a common mode noise source will drive the op amp inputs beyond the rail voltages depend greatly on the voltage of the common mode noise source, it's impedance relative to the circuit under test, and the resistors in the diagram. Change any one of those, and one will get different results. Different parameters, and any conclusions about immunity to noise need to be re-evaluated.

The impedance of 2 30nF capacitors in series at 60Hz is about 177k\$\Omega\$. Again, the current created by the noise source is only 1 mA peak, but the common mode signal at the op amp is 10V peak.

All voltages are related one to another in some way, and in its simpliest form it depends on impedances and interconnections.

When we say that one voltage is "floating" with regards to the other, we simplify our world by forgetting that they still are related through capacitive coupling and electromagnetic fields - in most cases we can effectively ignore these other couplings.

In this particular case you are measuring the current in the load using "direct connection(s)", this forces a relationship between your circuit and your input.

You are are correct that there are multiple resistors contributing to a "common ground" - \$R_1\$ and \$R_2\$ pretty much force the negative side of \$R_L\$ to the "ground". However this is not a "hard" force as you can connect the positive end of V1 directly to ground and force about -50V on your opamp's input terminals likely destroying it.

IMHO that shows that your "common ground" can be considered virtual.

Do the multimeters make a common ground with the source too?

Before connecting the multimeter to your circuit it is isolated(!) from it and "floating".

When you connect the multimeter the electrostatic charges are balanced so that the terminals voltages are perfectly leveled with the measured circuit. This initial connection can induce some very small currents into the measured circuit. After that initial interconnection, the multimeter pretty much acts as a very small resistor when making current measurements, like the circuit that you propose yourself.

To measure current on the low side of circuit, do we still need to have a common ground between V1 and V2?

If you add another current path between \$V1\$ and \$V2\$, you're likely going to disturb your measurement.

\$R2\$ is important though because otherwise your opamp input voltages can easily exceed the limits of the acceptable voltage range for your opamp. The value of \$R2\$ can surely be higher, it only needs to allow the electrostatic balance to be installed and maintained.

I would avoid a path to ground through the feedback circuit \$R_1\$ and \$R_2\$. Any unwanted current from the \$R_{load}\$ input to ground through these resistors impacts the measurement. To avoid this path, a circuit change would be needed. It's only "needed" if you confirm that this hinders you in practice.

Forget about V2 for a moment. The circuit looks like a current sensing amp. The output of the network is referenced to earth via R2. It could work.

V2 and RL make a current source going almost entirely into RS (assuming RL is small).
Looking at it that way, V2 and RL do not provide a low impedance to the rest of the network at all. They only provide a particular impedance (RL) between the top and bottom of RS. Is this a problem? I think not necessarily.

The other answers mention CMRR and capacitances. In addition, if RS is small enough, such as the 10mohm example, then its parasitic inductances might become significant compared to its resistance. If RL is really a transistor as mentioned above that too can be inductive. Anyway, "it depends".

UPDATE a way to look at it

The main issue is how do you measure REAL CMRR comes from how you model your REAL environment.

The other answers are correct but incomplete. To add further, you must consider that the CMRR is not just the Op-Amp but the ingress EMI from all common-mode noise on your target, the wiring imbalance and the impedance imbalance of each wire coming from the current sense resistor.

It is relatively easy to get > 100 dB CMRR in an Op-Amp which is 5 decades of the magnitude of balanced gain, but nearly impossible to get this even from any cable, twisted pair or coax. If you imagine two 120 Ohm wires twisted to the 240-ohm differential, imagine how hard it is to get each wire with a 5% tolerance on insulation down to 10 parts per million in both dielectric constant consistency and thickness as well as wire gauge for inductance and proximity to the noise source for the differential of mutual coupling to each wire. This is your real challenge and is why Shielded Twisted Pair (STP) rather than unshielded UTP.

The combination of both improves the result of EMI ingress attenuation.

Yet even this is not enough so a high impedance CM choke is used for ethernet, HDMI and VGA RGB signals to raise the impedance of each line to reduce the effects of EMI for induced ingress of common-mode noise current and unintended radiation of EMI (egress) while keeping a controlled differential low impedance.

Often an isolated switched-mode supply has terrible common-mode noise due to the crosstalk in the switching transformer from interwinding capacitance. Sometimes simply an RF cap between the "isolated" grounds will reduce the EMI, if you are less worried about earth ground noise than the SMPS noise. This can happen also due to the reduced gain in Op-Amps are RF EMI range and thus lower CMRR or it can be coupled into the interconnecting wires from power to signal again from poorly balanced or lack of shielded STP signal wires.

There is no magic bullet until you know where your EMI comes from and it's characterization for impedance and spectrum. Is it a low frequency AC line or a HF noise or a modulated RF etc. Each may required slightly different solutions.

In cases of EEG low level signals the virtual ground must be an active ground often called RLD Right Leg Drive which is a standard common-mode signal from all sources and used to drive the RLD electrode thus reducing the differential CM voltage in each signal wire.

In sensing SMPS noise and motor current noise, the current loops might be large and become a loop antenna radiating on your signal wires. Then you must consider orthogonal orientation to minimize the loop antenna effective gain in that crosstalk in addition to other methods.

None of these methods are new and are all well-documented in Henry Ott's Book on handling EMC which you may find older copies on archive.org.

But in all cases, the CMMR of the Op-Amp is not the worst case. You must identify the root cause and path of EMI, then the solution is easy. Often making it worse temporarily helps one find the sensitive area and so it can be attenuated.

Yes you do. While you do not need a ground plane, you still need a fairly low ground path, I wouldn't go above a few hundred ohms.

The reason is that op-amps are not perfect, the output voltage is not only relative to the differential input, but also to the absolute input voltage. So you want your input voltage to be tied to the ground of the opamp.

It is called the common-mode rejection ratio or CMRR.

This is why you don't want your op-amp input to be floating around as this will make the circuit non-linear and not predictable.

Also, common-mode noise will come into play, and the input side can easily be shifted fairly high if it is not on the same ground.

Another problem is that your input voltage may float outside the range of the op-amp input, destroying it on the way.

Not the answer you're looking for? Browse other questions tagged current-measurement differential virtual-ground or ask your own question.