So I am building and analyzing a Class AB / push-pull amplifier implemented with MOSFET as depicted in the following schematic: 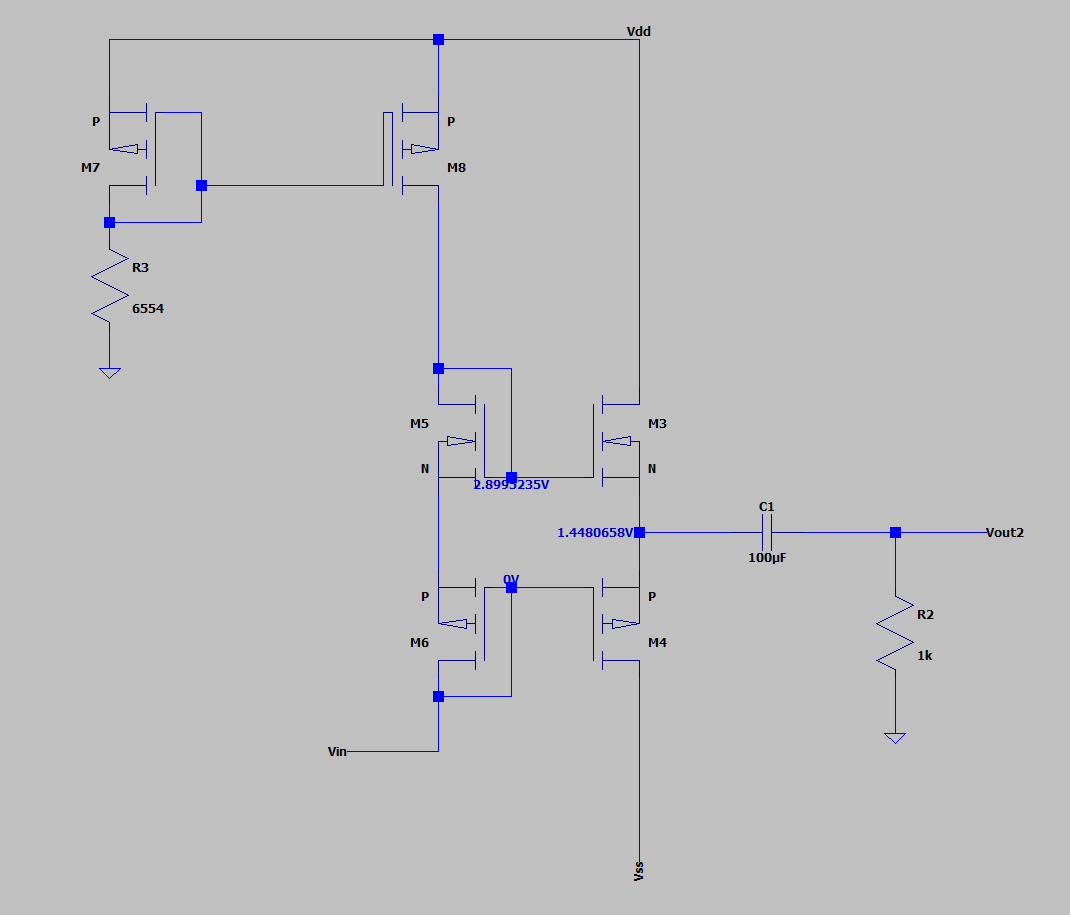 R2 is the load. The input is an AC signal with 3V amplitude and 1KHz frequency. I am trying to determine output impedance and doing the usual way where I turn off the input signal and inject a test voltage to measure the current and then calculate impedance, I get around 150 \$\Omega\$. However, I am also trying to do it the way my professor suggested, which is what I'm having issues with.

He said to think of the load as a voltage divider and that I could measure the output impedance by just simply changing the load.

So that makes sense to me. After all, looking at the following image:

The load and the output impedance can be modelled as a voltage divider network. I can put the amplifier under the same two known loads and solve both equations simultaneously and solve for \$Z_{out}\$. I can rewrite the equation for \$Z_{out}\$ using \$V_{L1}, V_{L2}, R_{L1}, R_{L2}\$ (voltage over load for the first and second load) without involving \$V_{out}\$.

This is where I'm stuck. Doing the above, I get:

and obviously the same is true for the second load:

Now, since the output impedance doesn't change regardless of the load, the two equations are equal:

However, I don't know where to go from here. I can't solve that equation cause there isn't enough information to solve it; I would need a second constraint because obviously that equation has an infinite number of solutions.

So I tried a different route:

Solving both of these together by replacing the \$ V_{out}\$ expression in the \$Z_{out}\$ equation I get:

I tested this out with two loads and measured the voltages:

But then I repeated the calculation with a different load:

So, I don't know where to go from here.

Is my derivation wrong?

What should I try next?

I'm not asking for anybody to do my homework, just for guidance

EDIT: Am I not supposed to repeat the calculations with such a low load? I retried with loads of 1k or higher and I get the same impedance of about 103. I'm thinking maybe since the load is so small that it's close to the output impedance, that's affecting the calculations. I've read that an effective damping factor is chosen so that \$ R_{load} >> R_{out}\$ so I do get the right result when I use a load that's much higher than the output impedance.

Something seems to have gone wrong in your derivation. I used a symbolic math package (sympy) to solve the equations:

and this results in this expression for \$Z_{out}\$:

Not the answer you're looking for? Browse other questions tagged mosfet amplifier impedance push-pull class-ab or ask your own question.