Do transistors work in reverse?

To clarify what I mean by "in reverse" I mean in the context of something like an amplifier, if your input signal switches from +5v to -5v, does the output signal also switch polarity?

Coming from using transistors for computing I was under the assumption that transistors were more discrete than that. That if there is enough positive voltage on the control wire, then it becomes a conductor and if the voltage falls below a certain threshold it becomes a resistor. And it had never even occurred to me what happens when you reverse the polarity of the voltage on the control wire.

If transistors don't work in reverse as I described, then how do they work to amplify a signal like from a microphone where the signal fluctuates from positive to negative?

I'm going to simplify the analysis here by discussing FETs (field effect transistors) which are controlled by voltage, and ignoring BJTs (which are controlled in part by current). However, these same circuits can be realized with BJTs, just having to take base current into account when doing certain circuit analyses.

I'll begin by drawing up a very naive amplifier, and explaining how it fails in the situation you predicted, as well as other considerations. I'll then build on it iteratively to show how we would really deal with the issues you mention.

To start, we'll need to acknowledge that a transistor alone is not an amplifier. Amplifiers are devices that are composed of one or more gain elements (vacuum tube, transistor, etc) along with a number of supporting components. I'm going to focus on amplifiers for signal gain, rather than power gain, because that's where my background lies. There are other techniques for dealing with negative signals, such as split rails and push-pull drivers that contain both P- and N-type transistors, that I won't deal with here.

Coming from using transistors for computing I was under the assumption that transistors were more discrete than that. That if there is enough positive voltage on the control wire, then it becomes a conductor and if the voltage falls below a certain threshold it becomes a resistor. And it had never even occurred to me what happens when you reverse the polarity of the voltage on the control wire.

This is on the right track, but it overlooks one major consideration: transistors are analog devices. The channel of a MOSFET is controlled by the voltage between the gate and the source. In an N-channel MOSFET, if you apply a higher voltage to the gate than the source, the transistor's channel begins to conduct1. In this way, a MOSFET behaves as a voltage-controlled current source.

Apply larger and larger voltages, and it conducts more current, until the load begins to limit the current. Notice the use of the words "larger" and "more". Rather than talk about discrete "on" and "off" , we talk about a continuous, analog process.

Let's take a very simple realization of an amplifier, specifically a common source amplifier without feedback or degeneration. The FET is configured to be used as a voltage-controlled current source, and applying that current to a resistor creates an output voltage. This is an inverting amplifier -- when the input voltage goes up, the output voltage does down. This will be important later. 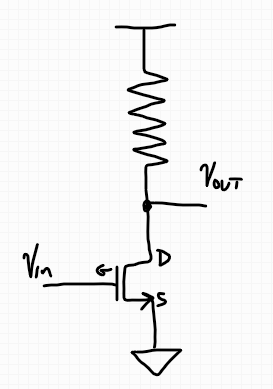 And now let's apply an input sweep just to see how the output behaves: 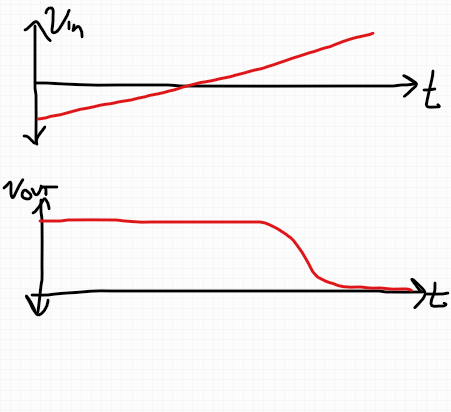 Disaster! This amplifier is nearly useless for something like audio. When the input is negative, zero, or slightly positive, the output is clipped at the positive rail. When the input is positive above the transistor's threshold voltage (a parameter of the transistor, varying with temperature and manufacturing variations), the output is clipped to ground. There's a tiny little region in which the amplifier is useful: 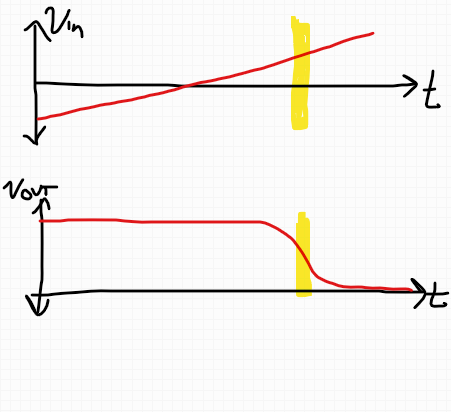 Let's apply a small signal instead. We do this, for example, by adding a capacitor, which allows an AC signal through, and setting the DC bias through a resistor: 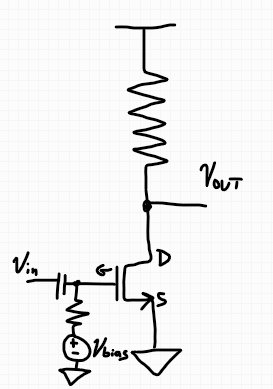 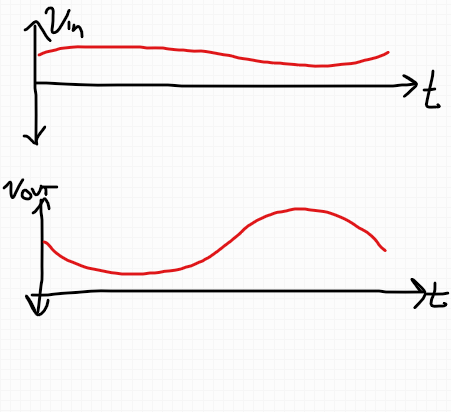 Much better. Except not really. We need a voltage source that perfectly matches the voltage we need for the amplifier to operate (called the operating point). Get the voltage wrong, and your amplifier's output is clipped into a rail and we have a useless circuit. Increase the ambient temperature, threshold voltage shifts, and we've got a useless circuit again.

What if we could make our system find this voltage on its own? Let's add some negative feedback (in a simplified realization). 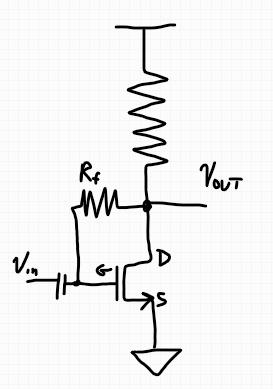 We now have a resistor linking the output back to the input. If the output voltage is too high, the input DC bias rises, causing the output to be reduced (because it's an inverting amplifier).

This result now gives us a very simplified prototypical amplifier. Here's the key point: It no longer deals with negative signals. Instead, we use AC coupling and feedback to operate it in its forward-biased mode of operation at all times, with a small signal to keep it linear and avoid distortion.

In reality, our amplifiers are much more complex. Even the simple op-amp, five transistors in a prototypical version used to introduce them in a design class, actually has dozens if not more transistors in many practical realizations. The take-away is still the same -- we operate many transistors in a small-signal regime, with feedback used to establish useful parameters of their operating point, like we set the DC bias for the input here.

1 A P-channel MOSFET has the opposite behavior. It conducts when the gate has a lower voltage than the source, but is completely cut off when Vg > Vs.

A useful integrated circuit, the 'diamond transistor', is available if and as one needs a zero-biased input to drive a zero-biased output; there are other so-called operational transconductor amplifiers with similar characteristics.

how do they work to amplify a signal like from a microphone where the signal fluctuates from positive to negative?

A carbon microphone (microphonic resistor) can be biased with a positive or negative current, and would have zero output if one tried to operate it with one terminal grounded and zero bias voltage. A dynamic microphone has whatever 'common' connection that it is given, NOT an absolute grounded terminal, so can be connected to any convenient input potential for a transistor to amplify.

One can establish a bias point with a battery, or power and resistors, and couple the signals (input and/or output) through capacitors, to pass signals which do NOT contain DC through such a signal path. Such an AC amplifier circuit has a useful range of frequencies in its specification, it is only near-ideal in that range. That is how an audio amplifier usually works.

One can also transformer-couple a microphone signal, and with center-tapped transformer windings, a bias voltage for the microphone, or the amplifier it couples to, can be applied to suit any requirement. So-called differential signals using such transformers have excellent noise rejection, and are common for long-wire applications, like Ethernet or theatric microphone arrays.

Adapting a limited item (the transistor) to a real-world amplification application is a common, but not trivial, engineering task, with many solutions.

6
Another question concerning transistors
0
Using a pulse-width modulated signal to possibly reverse polarity
5
Matching transistors for discrete opamp (audio use)
8
What parameters of a real op amp determine the lowest voltage it can amplify?
0
H-Bride Implementation with minimum voltage drop using Raspberry Pi
1
BJT Transistors
1
Will this receiver work?
1
Make a real world example with a NPN Transistor
0
How to construct an audio amplifier by using transistor and voltage differential circuit?