I am trying to learn about lead compensator from above link

But i have bit confusion regarding two terms,"T" and "aT" here, as shown higlighted in attached snapshot? What do they denote?

They are related to some time parameters but it is not exactly clear, whose those parameters are? 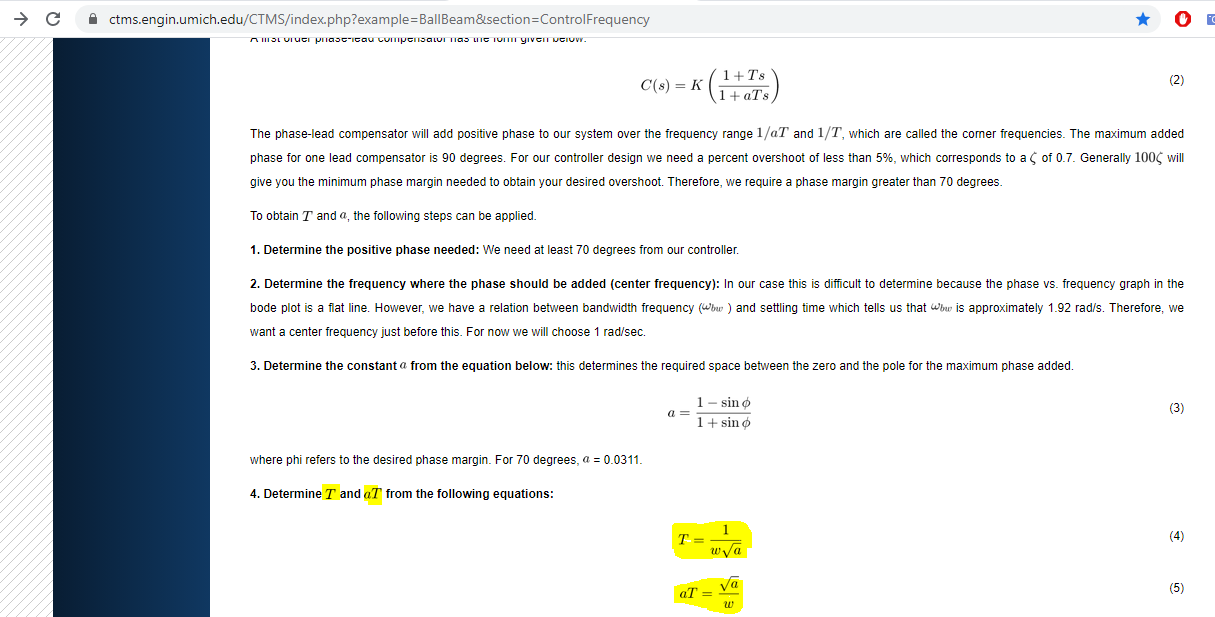 This type of compensator involves a zero \$f_z\$ and pole \$f_p\$ linked by the coefficient \$\alpha\$. If \$\alpha\$ is 1, then the pole and zero are coincident and cancel each other in magnitude and phase. If the zero is now lower than the pole (\$\alpha < 1\$), then you can determine the phase of the system and see that it increases: we say the compensator boosts the phase between the zero and the pole. As you spread them (the zero goes down the frequency axis while the pole runs opposite towards higher frequency), the phase boost increases and peaks to 90° as a maximum. You will actually organize the zero and pole so that it produces the expected phase boost at the point you need it the most which is usually the crossover frequency \$f_c\$. And if you do the maths ok, you'll find that the phase boost peaks at \$f_c=\sqrt{f_zf_p}\$. If you now add a pole at the origin (with an op-amp based circuit), you have created a type 2 compensator, extremely popular in switching converters.

Not the answer you're looking for? Browse other questions tagged control control-system terminology root-locus or ask your own question.

2
Root Locus and Imaginary Axis
7
What is meant by 'local' in local oscillator?
5
What is this kind of symbol meant to be?
1
Controller vs compensator?
0
How to find the gain K at break-in and breakaway points of a Root Locus Plot on MATLAB
6
What is meant by "plant" in control system?
2
What is meant by Voltage current dynamics & current position dynamics?
0
Two different expressions for lead compensator?Why?