Why do all the LEDs in this circuit light up at once?

I have two things to say before I ask my question:

What I want to achieve

I want to build a little box, exposing three rotary dials (or potentiometers in my case), each controlling the brightness of one channel of a single RGB-LED (common ground).

I bought three simple PWM-Modules (link to the product page for reference, not a referrer link!), each providing a potentiometer and +/- connections for the DC in and "motor" out (they're primarily meant for motors). I don't have the schematics of those, so my sketch below shows an abstraction of the modules. I also bought a little RGB-LED module that's nothing more than the LED and three resistors (pretty superfluous).

Here is a plan of how I prototyped my build: 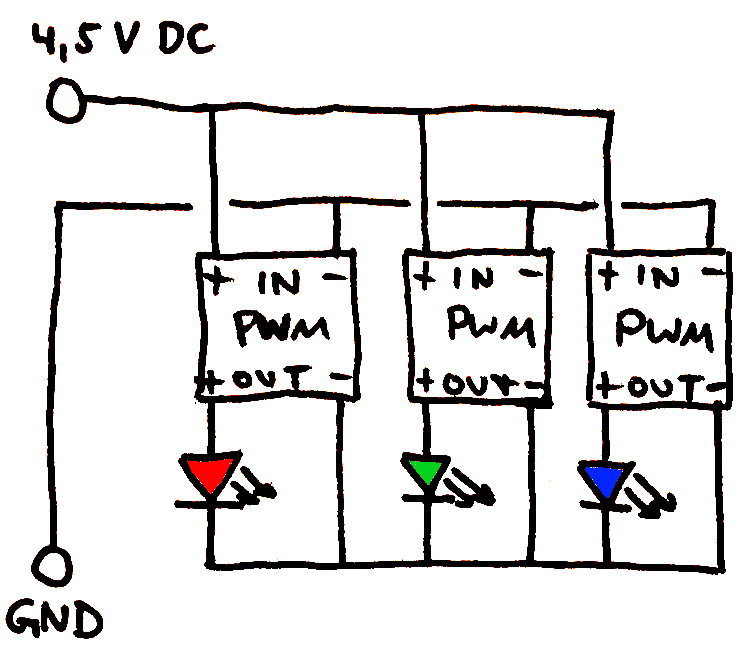 For me (as an absolute layman) this looks like it should work. But the problem is that as soon as I turn up one of the PWM pots to control a single LED (of the RGB LED package), all three LEDs light up (nice and slow, so at least that works).

When I disconnect two of the LEDs, only one works (obviously). When I measure the voltage on the disconnected "out +" (from PWM out + to the LED) - all three get the same voltage. How is this possible? I want to control the RGB colors independently.

Is it possible that the PWM modules are not made to work in such a parallel configuration? How can I solve this? Thank you in advance!

PS: I know so little I don't even know how to correctly tag this question :(

Your LED array is common-cathode so you cannot use it with these PWM modules. This is inherent to the LED device itself and cannot be changed.

The PWM modules have the + in and + out more-or-less connected together (there's a polyfuse in each line) and that won't work for you.

You can use individual LEDs with resistors. It's also possible to use a common-anode RGB LED + resistors however the fuses will be paralleled, which is not ideal. 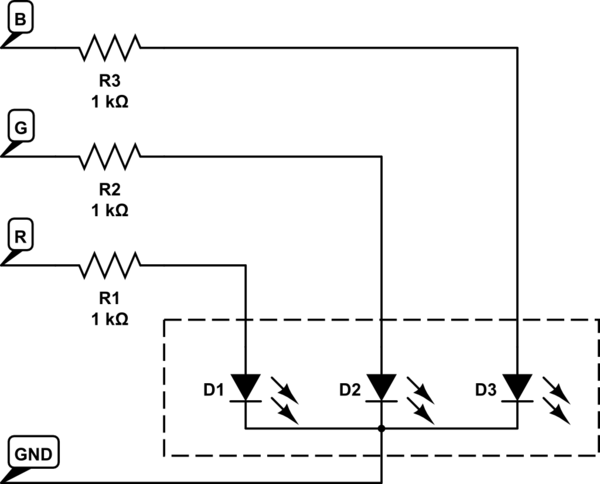 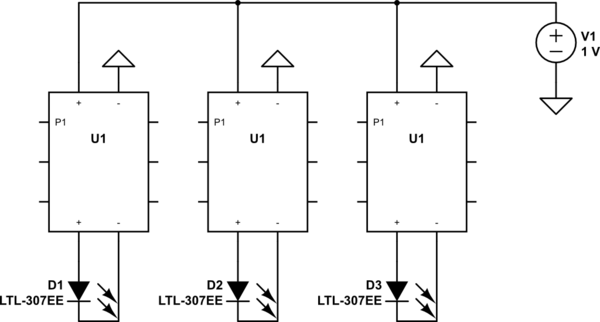 I suggest you try it this way; disconnect the LEDs from each other.

That PWM controller has a regulating element, probably MOSFET, connected between "-" output to motor and "-" power source. It is switching "-", not "+" . To control RGB LED you need common anode LED.

1
Multiplexing AVR (ATMega328) PWM within Interrupts
1
RGB LED strip, powered by an ATX PSU and controlled by PWM, makes my speakers buzz with Arduino connected by USB
8
MOSFET choice for 12v LED Strip and 3.3v Logic
0
Is this PIC micro-controller powerful enough to drive PWM LEDs?
0
Multiple two pin multi-color LEDs pattern - how does this work?
1
Is it OK to drive a LED matrix with constant current?
0
How individual LEDs in LED strips (or matrixes or cubes) are being powered when supplied with >=12V instead of 5V?
2
Why would an RGB LED still glow with only the cathode side connected?
0
Would this be an appropriate design for interfacing high-power LEDs with an ESP32?