I have a problem with a simple comparator circuit. The comparator takes a 1 PPS (pulse-per-second) signal as a single-ended input, and outputs an LVDS signal.

The issue is that the comparator, ADCMP604, consistently re-triggers on my input pulse's falling edge for some unknown reason, so I end up with a glitch directly following the main pulse width. 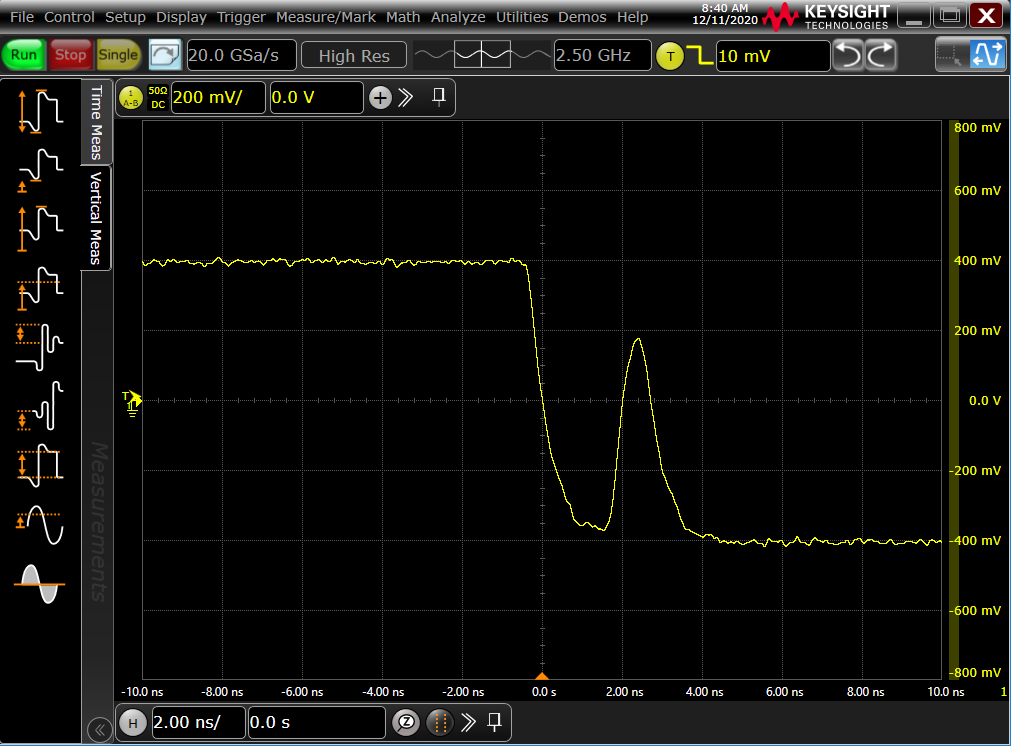 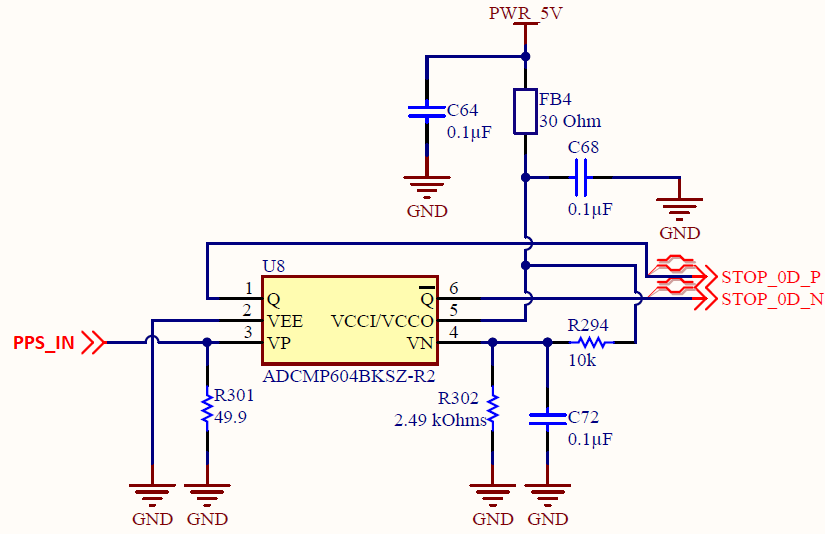 The PPS is input on an SMA port from a SpectraDynamics pulse distribution amp (which itself takes a pulse from a Rubidium clock for distribution.)

The LVDS output (STOP_0D_P/N) terminates with a 100 Ω resistor just before its receiver. I have tried everything I can think of:

Nothing worked - though increasing the trigger level helped (the glitch reduced, though wasn't eliminated).

If I use the raw Rubidium (Rb) clock output as PPS_IN (as opposed to the output from the distribution amp) it works fine. The Rb output has a much slower rise time and does not undershoot on the falling edge.

So, I suspect it relates to either the freq. content or the undershoot.

This is a view of the falling edge of the input PPS (note the undershoot): 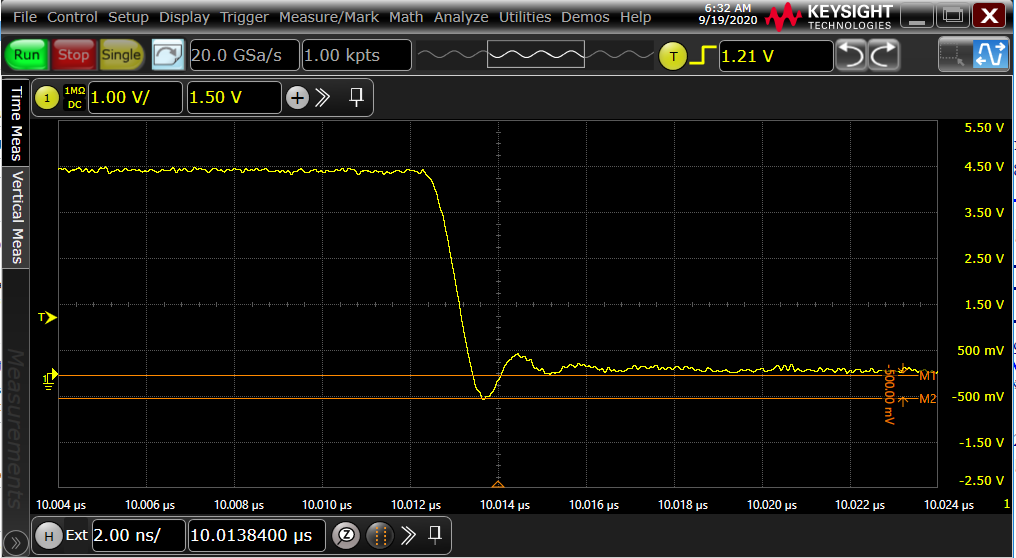 And this is a conglomerate view of the input pulse, trigger level, and LVDS output: 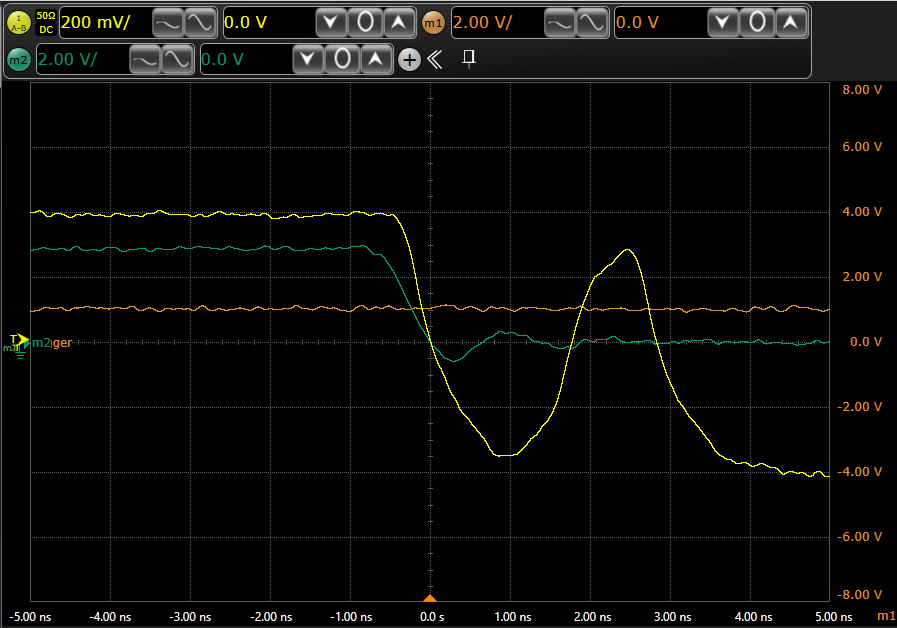 This is driving me crazy. Any suggestions are welcome.

Appendix:
Below is a view of the layout. I highlighted the relevant path in green. For scale, most components (including R56) are 0603. 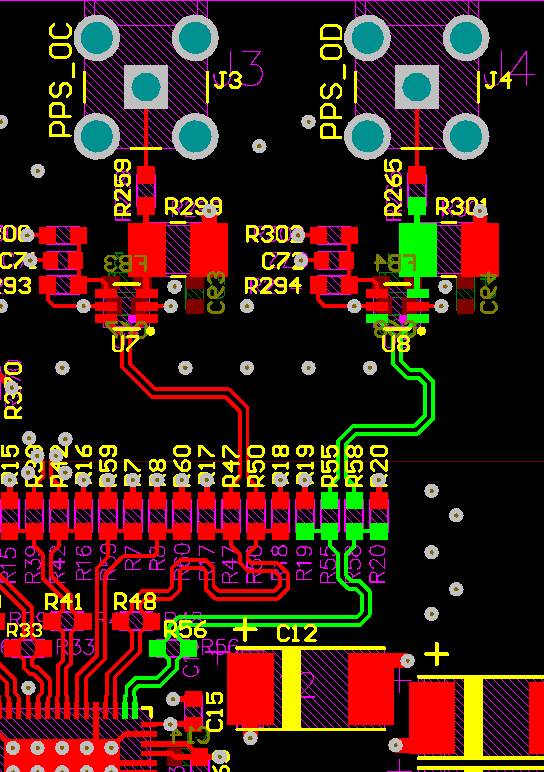 For decoupling the power supply to the comparators, the data sheet says use multiple 10 nF decoupling capacitors and not a 100 nF capacitor. There is a reason. 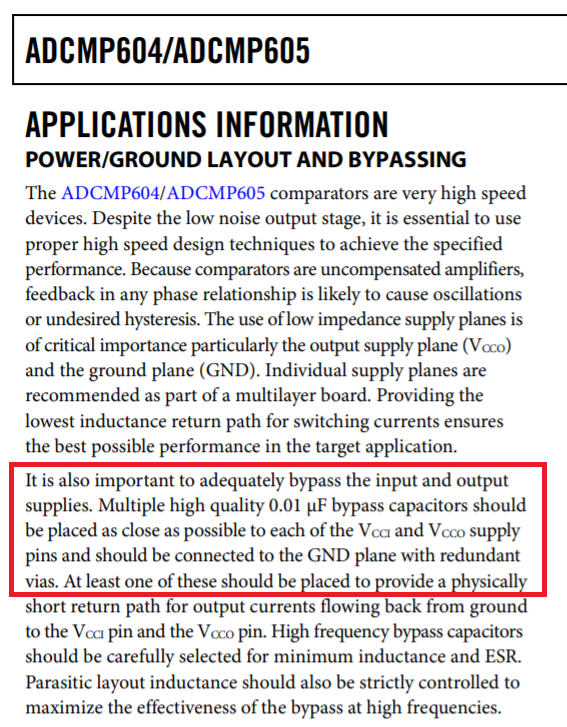 You should read the data sheet and understand why 10 nF is preferred over 100 nF in high speed applications.

Some things to check.

Ditto on VCC : as Andy points out, the right decoupling is crucial (and this is a likely candidate)

Change the shape of the overshoot on the input. (For example, add a 75 ohm series termination at its source). Does that affect the output much?

Look at both Q and Qn (only Q-Qn shown) ... treat these as transmission lines ... is anything bouncing back from an impedance mismatch at the far end? On the LVDS output, where are you looking? at the output or at the receiver? any differences between these points? what does each leg look like on its own?

this hints at some variation in performance with excessive input overdrive : it may be worth attenuating the Vp input to say 1Vp-p (centred around Vn) to see if this is related to a combination of that ground bounce and excess overdrive.

6
Issue with TI comparator
0
Low level sine to pulse converter with sharp rising-edges
3
Some questions regarding the resistors and capacitors around an opamp
1
Teensy 3.2 Comparator
1
Dual slope edge detection for a phototransistor
0
How to scale (0-7V, 15-18V) to (0V, 3.3V) for OTGW project