I originally asked "Minimum current level to trip a GFCI"? But the answers pointed out that my biggest problem in this question is that I shouldn't use a general-purpose DMM to find an electrically insulated component whose insulation is going bad. When insulation breaks down, there may be some problems that only show up in the presence of line voltage.

Insulated components should be tested with a meter designed to test insulation at line voltage (or higher). This kind of meter is commonly called a “Megger”.

I have an espresso machine which just started tripping my kitchen GFCI as soon as I turn it on.

According to google, the most common thing that fails on my unit is the heating element; so, I checked the heating element with my Fluke DMM's continuity beeper. There was no beep from the tester, and DMM measurement display said "OL" (too large to measure). I went on checking a bunch of other things, but found no problem.

If you are tripping with normal equipment that has been UL tested (or some other ETL) then I would try a different GFCI as they can have issues with tripping to early (I had to replace one the other day). – Voltage Spike♦︎︎︎︎︎ 13 mins ago

Fair point, I tried another GFCI and it tripped with the heating element connected... this seems like a legit ground fault.

Is the GFCI separate from the overcurrent circuit breaker?

Yes, it's a typical residential setup... 20A breaker in the central box for the kitchen circuit and a couple of inline GFCIs in the kitchen

Did you measure heating element resistance between Live and Neutral too?

Yes... but as others have pointed out, I shouldn't be trusting a DC resistance measurement for (complex plane) 120V RMS @ 60Hz impedance.

Was the heating element disconnected from all other circuitry when you measured resistance to earth?

Yes and I also made sure the boiler was drained so I wouldn't be checking resistance across any "water path" between the frame of the boiler and the heating element.

Sometimes other components such as filter capacitors can be charging or leaking from the multimeter and that is why multimeter shows some high megaohms resistance.

It's hard to see in the picture, but I disconnected all boiler leads before measuring with the meter.

Let's do some math. How much current is leaking?

CAVEAT: As pointed out in the answers, I probably should not trust that 3.6MOhm Fluke DMM resistance measurement to be the same impedance for 120V @ 60Hz. The DMM uses low voltage DC to measure that 3.6MOhm result.

Lesson learned: My DMM's continuity checker can miss some problems.

This UL link claims that GFCI current protection threshold seems to be in the range of 4ma leaking to ground. So we also have an interesting situation... 60 microamps leakage is much lower than the expected GFCI trip level. I consider it possible that GFCIs are manufactured to trip at much lower levels than UL-guidance of 4ma... for instance perhaps the reality of injury or death lawsuits (from "allowing a small current leak to ground") may drive manufacturers to trip at much lower levels.

Overall, I'm glad my GFCI tripped, but I still don't quite understand everything. This is a Cooper SGF20W GFCI; I haven't found published test data on where it trips. What is common in the industry for the current threshold that GFCIs are actually designed to trip at? 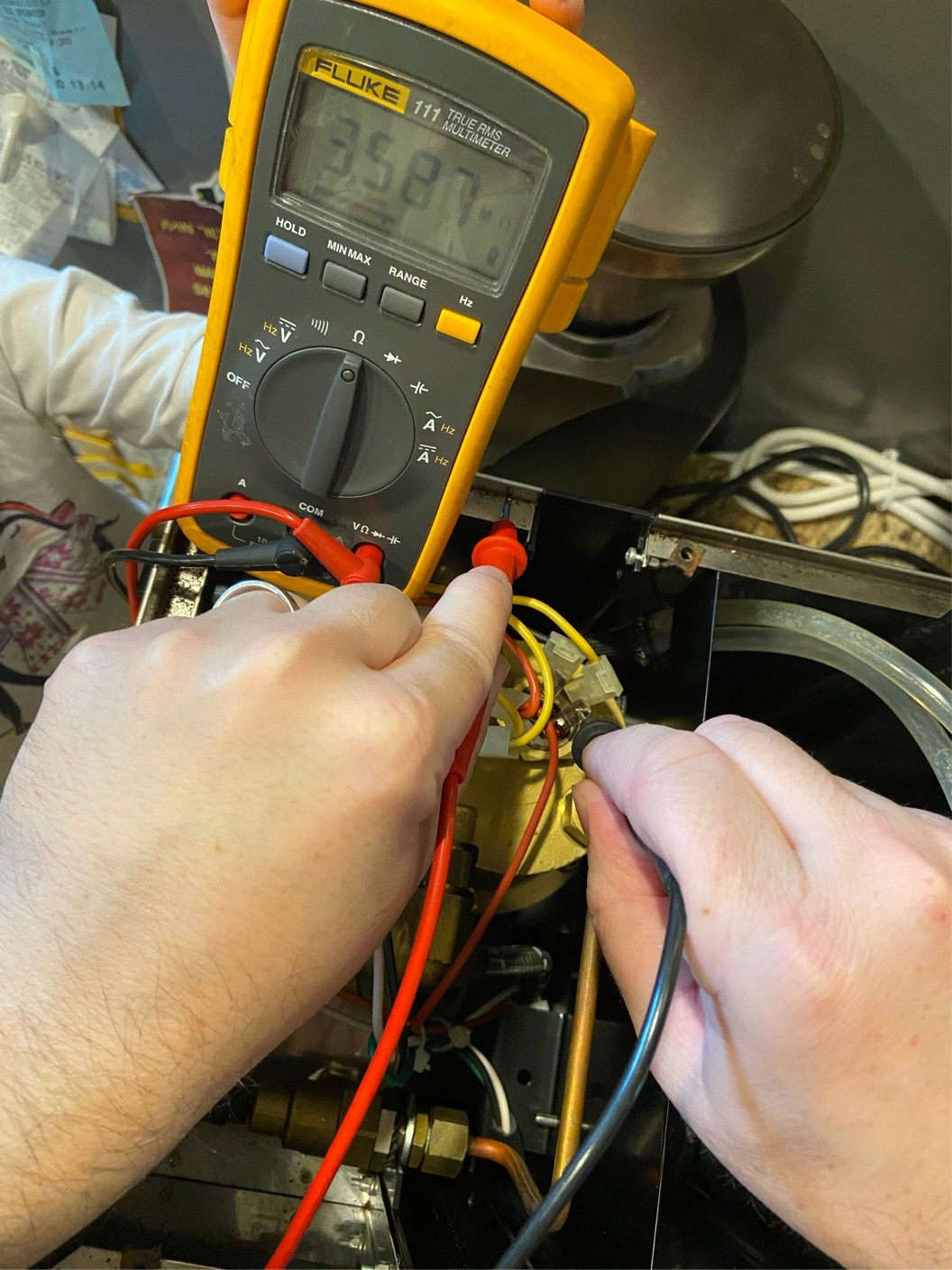 You are making your insulation resistance tests using low voltage DC. It should be checked using a higher voltage which can cause the weak point in the insulation to break down.

There are special testers for doing this (e.g. Meggar)

You are assuming that the leakage is through a resistive fault. It's more likely that at some high enough voltage the voltage is causing a breakdown across an airgap in the mineral insulation. The relationship between voltage and current will be highly non-linear and non-conducting until breakdown occurs. Due to the non-linearity Ohm's law no longer generally applies.

The breakdown voltage of air will be in the order of 3 kV/mm.

From this UL document:

A Class A GFCI trips when the current to ground has a value in the range of 4mA to 6 mA (reference UL 943).

In other words, it should not trip at less than 4mA. The trip time must be <= 25ms. They will not trip at 60uA or even 1mA because that would cause nuisance tripping from capacitive coupling or internal Y capacitors on some kinds of supplies.

You could further test the element with a Megger type unit, as would be done at the factory, however it sounds like you've got it narrowed down to the element.

If the shell of the heater has been breached by corrosion and water has gotten in, then it may behave quite differently at high voltage vs. low, with ionic conductivity dominating and the water getting quite hot in a small area very quickly (which increases conductivity exponentially by several percent per degree C).

As you note any measurable resistance to ground is bad and should be fixed (with fixed meaning heating element or whole device replaced). But the amount of leakage current/resistance measured will be wrong, as 9V battery in your DMM is obviously not as powerful as 120V mains.

Which is also why people warn you that DMM is not right tool for the job - even if DMM said there was infinite resistance to ground, it might be wrong, simple because it is not powerful enough to measure real-world scenario.

TL;DR - you can use DMM to prove the device is broken, but you can't use it to prove it is not broken

Was that measurement when the element was cold?

One aspect of a heating element is that it's supposed to get hot. And heated metal expands, allowing things to touch that might remain unconnected when cold.

Not the answer you're looking for? Browse other questions tagged ac gfci or ask your own question.

0
Proper setting of a magnetic trip breaker
2
Automatic Self-Test Circuit in GFCI outlet
0
Can a grounded thermocouple cause GFCI to trip?
1
120v Inverter and GFCI
1
How can I prevent my multi-meter fuse from blowing with a brief 120VAC surge?
2
How does a RCBO trip from a vapourised PCB trace?
0
Should I expect the heating element in new cartridge heaters to be electrically isolated from the stainless steel exterior sheath?