A few questions about three phase AC induction motors. All questions relate to a Wye connected motor, running off 120V rms (phase-neutral), each phase 120° apart. This is a pure and simple three phase motor; there is no starting circuit, overload protection, extra circuitry, etc. 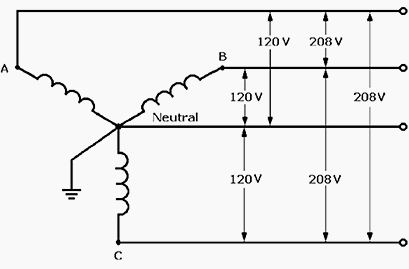 Overall, give the number of variables your best bet would be to measure these values.

The line-neutral equivalent circuit of one phase of an induction motor is shown below. The rotor circuit, consisting of X2, R2 and R2(1-s)/s is connected to the stator components through an ideal transformer. The transformer is usually not shown and the rotor component values are adjusted accordingly. The input terminals correspond to the motor's phase and neutral points.

When the rotor is locked, s = 1, so (1-s)/s = 0/1 = 0. Therefore the locked rotor current is determined by R1 in series with X1 with that combination in parallel with the series of rotor components in parallel with the magnetizing branch components, G and B. Therefore the winding resistance, R1 is considerably less than the total impedance that determines the locked-rotor current.

Three-phase motors normally do not have the neutral connected externally. That point may not even be accessible. If that point is available and rated voltage is applied, the resulting current would be approximately the same as the locked-rotor current. Locked rotor current with voltage applied to two phases without a ground connection will be approximately the same as half the line voltage divided by the normal line to neutral voltage (208/2)/120 = 87%.

If one phase of a three-phase motor is disconnected while the motor is running, the remaining winding creates something like a single-phase motor. It is like two magnetic fields rotating in opposite directions. In the direction that the motor is already rotating, the torque is strong, because the slip is comparable to the normal operating slip. However the torque is less than normal because the voltage per winding is about 87% of the normal voltage. The torque produced by the reverse-rotating magnetic field is smaller because the slip is nearly 2. However the resulting torque is significantly less than the motor's normal torque. The reduced torque capability will be compensated somewhat by increase slip, but that will result in increased current.

Not the answer you're looking for? Browse other questions tagged motor three-phase induction-motor or ask your own question.