Connecting a LED between two 74HC595 without current limiting resistor

The 74LS04 have internal resistors to reduce the shoot-thru current. When that pin is driven high, the Vbe and Resistor limit the current. Is that resistor designed for permanent heating? Those pins are short-circuit-proof 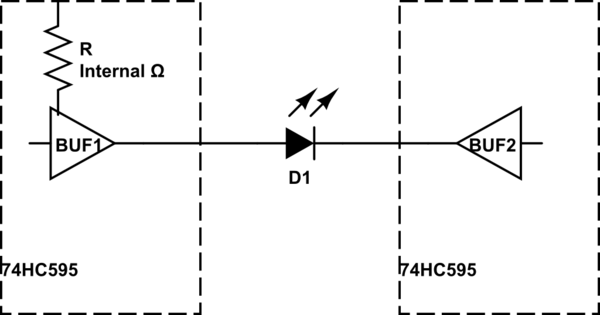 I have searched through the documentation but none of them shows the internal structure. What is your opinion about not using the current limiting resistor?

My opinion? Bad idea. Whilst the internal mosfets of the logic device have a finite on resistance, relying on this is not wise as they will be thermally limited - the more current you flow through them, the hotter they get. The HC595 datasheet will outline these limitations. Sure, it will 'work', but it is still bad practice. There's WS2812 (neopixel) leds and their variants that have an internal controller and driver. You can run a number of them off one port pin.

There is a mixup of logic families going on.

The text you quote uses a LS type chip as an example, which is a bioolar TTL chip. TTL type chips do have an internal structure that is compatable with a current limiting resistance.

But the component you want to use is a HC type chip which uses CMOS technology, and CMOS chips have no such structure in them that would act as a current limiting resistance.

So the answer is, no, you can't use a 74HC595 to drive LEDs directly without a separate current limiting resistor.

Not the answer you're looking for? Browse other questions tagged led 74hc595 or ask your own question.

40
Correct formula for LED current-limiting resistor?
24
Why doesn't my 5050 led strip draw as much power as I expect?
1
coding using Arduino, two 74HC595 and two RGB LED, problems with shifting out database
5
How are multi LED flashlights wired to control current w/o resistors or regulator?
0
Resistor for 20 LEDs in series
0
Common current limit resistor for multiple LEDs?
0
Resistors for 3W RGB LED
2
How to achieve constant current for LED when voltage is variable in MCU
0
Array of leds without limiting resistor?