How to connect microphone to an Arduino with an opamp?

I'm trying to connect a contact microphone to an Arduino.

I got a couple of LM833N audio dual opamps, which I'd like to put to use. I'm still struggling to understand opamps, though.

I've been reading an instructable on audio input on the Arduino. It uses the following circuit: 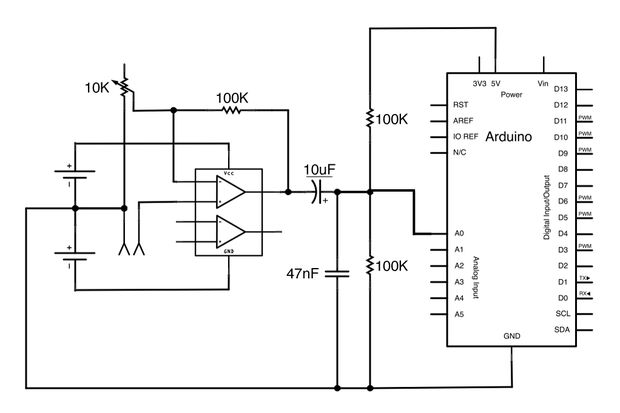 However, this is for the TL072 opamp. I'm not really sure if I can use the LM833N in its place. Is this circuit suitable for a contact microphone?

Also, it would be great if someone could point me to a good (easy) introduction to opamps - the wikibooks page is a bit dense for me.

I know it's old, but may still interest someone. With a piezo contact mic, you may want to also connect two diodes allowing current to go from ground to mic output and from mic output to vcc. Under normal conditions there is not voltage over them, but a piezo can create some serious voltage spikes if hit, and this will protect your amp / arduino, so excess voltage can go to power supply rather than amp.

It will work, and Oli's suggestion of a capacitor is a good one. I'd point out a couple more things:

You don't have any capacitor to block any DC offset on the input. This is fine, if you are going directly to your microphone and you know there won't be any. However, if this is going to a connector on the box, you never know what people will plug in there, and it may work fine, until it doesn't, and your amplifier is fried. It's probably best to go for a non-polarized type here, since you don't know what people will plug into it.

Another issue: "Contact microphone" usually means a piezoelectric microphone. These are different from most other microphone types in that they have a very high output impedance, on the order of \$10M\Omega\$. The input impedance of your amplifier is an order of magnitude less, which will result in significant attenuation of the signal and alter the frequency response of the microphone-amplifier system. It will work, but it may not sound good. This is of course, subjective and depending on the timbre you desire.

The solution is buffering, converting a high impedance output into a low impedance output, or equivalently, amplifying the current. An op-amp can do this in a circuit called a voltage follower:

Put this between your microphone and the input of the circuit you already have (on the microphone's side of the cable, if you can), and your amplifier's input impedance will be that of whatever op-amp you use, without otherwise changing the operation of your circuit. Oddly, I don't see an input impedance listed in the LM833N datasheet, but since it has a BJT input stage, it's probably some megaohms. This is "high", but not higher than the piezo. You'd want to look for an op-amp with a MOSFET input stage with a very high input impedance: TL072 is a common such type with the datasheet listing input impedance at \$10T\Omega\$.

Yes, the LM833N should work fine in it's place. The circuit looks okay for a basic mic amplifier - I'd probably add a capacitor across the 100k resistor though, to roll off the gain at higher frequencies (i.e. > 20kHz) 50-100pF should do, but don't worry if you don't have one in this range, it will likely work okay.
EDIT - note Phil's point about the piezo issue - if your mic is a simple passive contact mic (with no battery powered preamp) then use the buffer he suggests. Looking at the link I notice the original circuit is intended for a dynamic mic, which have a far lower impedance

The formula for the -3dB point (0.707 of the initial voltage) for the filter formed with the capacitor added is:

A good intro to opamps is "Opamps for Everyone".

Edit: TI appears to no longer be hosting the PDF version of "Op Amps for Everyone" but Google finds a number of versions that are still out there. I'm not sure about the propriety of linking to them, so I haven't included a direct link, but this search should get you started.

Not the answer you're looking for? Browse other questions tagged arduino audio operational-amplifier microphone or ask your own question.

9
Electret Microphone preamplification - will it work for dynamic type microphone?

18
Using a microphone with an Arduino
5
How to stabilize a control loop for an opamp-based linear regulator?
3
Advice to improve my microphone circuit
1
Handling audio signals on a 5v ADC
0
Puzzling result from opamp circuit. Using opamp for negative reference
3
Any device with audio jack as UI
0
Detecting very low voltage audio signal