Discharging a capacitor through a depletion MOSFET

I´m building a device to remotely operate a solenoid through a data link. That device, which is powered by a 9V battery, has a step-up circuit to raise the battery voltage to +- 160V which, in turn, charges a 330uF capacitor. As soon as a command is received from the base, the capacitor is discharged over the solenoid through a relay.

My concern here is about safety when the shoot is aborted after the capacitor is already charged. I'd like the capacitor to be discharged (not through the solenoid, of course) in a brief time span (let´s say 30s max), to minimize the risk of an accidental shoot in the case of a circuit failure.

An obvious choice would be a bleeding resistor in parallel with the capacitor. But to have it discharged in 30s, its value would be:

Using a resistor with this value would permanently drain:

Due to the step-up configuration (which is raising input voltage about 20 times) the input current, in this case, would be \$ 20 \times 0.009 = 180 mA\$. That much energy would have to be drained only to "feed" the bleeding resistor. Considering all the other circuit needs, and the fact that the whole device is powered by a 9V battery, that seens a little too much.

My next, not so obvious choice, was to connect the bleeding resistor through the NC terminal of another relay, which should be kept open during the capacitor charge. Naturally, that would be power consuming too, but much less than the bleeding resistor being connected directly to the capacitor. Plus, got the bonus of having it being discharged even quicker because, in this case, I could use even smaller resistors.

In fact, I've assembled a prototype to test this concept and... it failed. Actually, the circuit worked as expected, but a single battery was not enough to power it and I've had to use two batteries in parallel, otherwise, when that additional relay was closed, the voltage supplied dropped so much that the Arduino Nano, which was managing all the fuzz, simply rebooted (forgot to mention his presence before).

Trying to reduce the power drain I disable all the LEDs and adjusted the radio module (a EBYTE LoRa E32-91520T) to the minimum transmission power possible, with no success.

My next choice is to use a solid-state device, instead of the relay. That could be a Form B (NC) SSR relay, but they are impossible to find where I live (can´t find them even on the Internet). Meanwhile I was doing that research I became aware of the Depletion mode MOSFETS, which at first glance should do what I want. Here comes the problem: I did tons of research over the Internet and couldn´t find a way to wire it up to behave like that, especially because it needs a gate voltage inferior to the Source's voltage to keep it closed. In a matter of fact, there is not so much information about those MOSFETs available, usually more theretical stuff than practical applications.

So, I've tried to simulate their use on the computer, in dozens of different configurations, even using a pair of then back to back (as I discovered they are used in SSR Form B relays), with no success. Sometimes they even worked closer to the way I expected but the current drain to keep the channel open was bigger than the original relay needed.

I do really feel that the answer to that dilemma is quite simple, just lurking around some corner, so I'm asking the experts for some clarification on that. If the use of a depletion MOSFET is not the best solution here, let me know as well.

This is the (almost) full schematic: 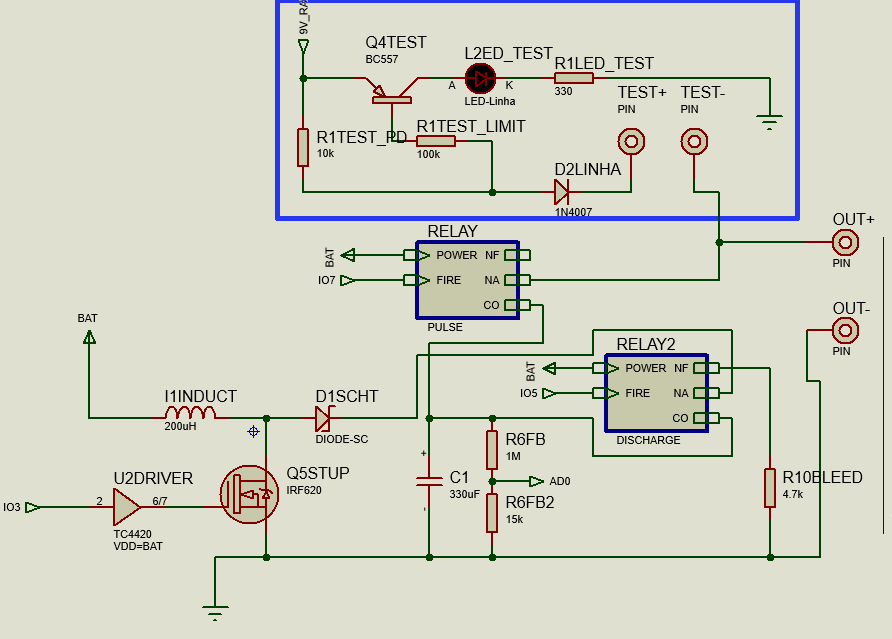 The blue squared area is a continuity test. When the user presses a button connecting TEST+ and TEST-, LED_TEST will turn on if there is continuity on the solenoid (which is plugged on OUT+ and OUT- binding posts). This part of the circuit is powered directly by the battery (the 9V_RAW power line).

The rest of the circuit is the step-up boost converter (to the left) and the output relays (to the right).

The boost converter is switched by Arduino PWM pin 3 (which is configured to 31372.55 Hz). The relays are triggered by Arduino's 5 and 7 digital pins.

R6FB and R6FB2 pair is a voltage divider to feedback the output voltage to Arduino´s analog pin 0. Obviously, they could also work as a bleeding resistor, but I had to choose that high value (1MOhm) due to the current constraints I've mentioned above.

The RELAY and RELAY2 subcircuits are like the following: 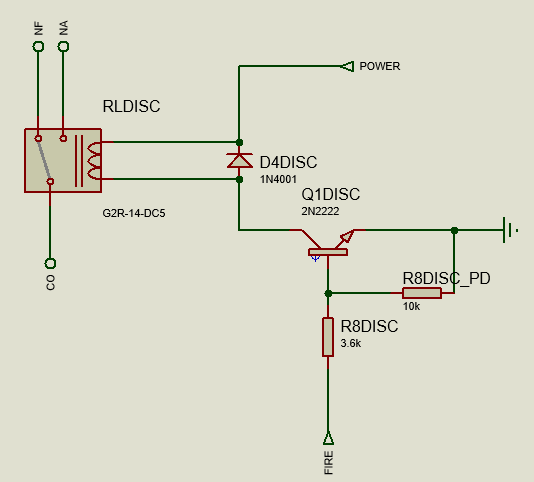 BTW, the relay contacts translate as NF = NC and NA = NO.

OK, so there are two approaches to your question, and you are likely thinking of the first one, which is more general:

Question 1: which semiconductor switch can be conducting when there's absolutely no power, but non-conducting (open) when there is?

The answer to this would generally be something exotic like the depletion-mode NMOS or a normally-closed relay, which have problems of their own. You can add, for example, a TC7660 charge pump to generate -9V to keep the depletion NMOS pinched off.

Or you can take advantage of the fact that the 160 volts cannot be generated in the absence of any power, so you can design a circuit that assumes some power was available previously. To restate:

Question 2: which semiconductor switch can be conducting when power is removed, if power was available previously?

This can be simpler. You can store some small amount of power in a capacitor and use it to drive the gate of a normal (enhancement) NMOS, like this:

It appears you are using "shoot" to mean activating the solenoid to do some work. Assuming your controller knows that the "shoot was aborted", then the only time that bleed resistor is needed is when the solenoid wasn't used. So, add a normally open relay that connects the bleeder, and don't activate it unless there was an aborted event.

Not the answer you're looking for? Browse other questions tagged mosfet batteries capacitor relay discharge or ask your own question.