I try to understand this question since a while and I think I came to an understanding. But I need someone to confirm it. At first, I thought the bitrate was dependent on the frequency (more sines per sec = more data per second). Now I understand that that was completely wrong.

Here is my understanding now:

Let's say I have a carrier frequency of 1000 HZ

Now let's look at the bandwidth:

So in case 1, with bandwidth of 2 I have 1 bit of information that I can carry and in case 2 I can carry 2 bit per time unit.

I know this is way to simple, but is it in the right direction?

Update: ok, I think I got something wrong. This helped me:

I just found those slides about FSK https://www.slideshare.net/jessierama/frequencyshift-keying

There is this image: 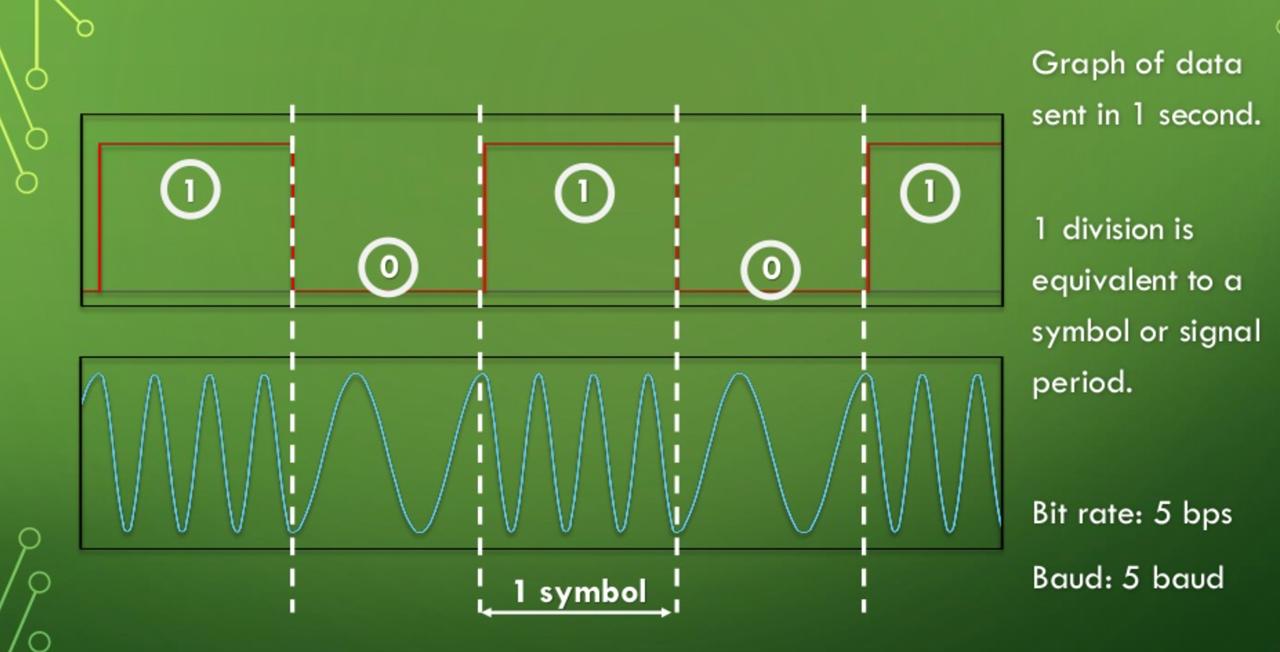 So in this case, with FSK there is a bitrate of 5 bps. Because the bandwidth allows to switch the states 5 times per second. When I have a higher bandwidth, I can switch more often (faster) the states, so I have more bits per second. Is that assumption right?

What you describe is called "FSK", or https://en.wikipedia.org/wiki/Frequency-shift_keying

Also important to note that

All this matters if you are transmitting into a band limited channel, meaning that only a certain amount of bandwidth is available, either by regulatory limits or by physical limits.

Consider the "Talking Tube" or "Speaking Tube" used long ago as intercoms on ships, in houses and now in playgrounds. The longer the tube the less bandwidth is available to you and the slower you have to talk. This is separate from attenuation, which requires you to speak louder over longer tubes.

These tubes are a great example of a physically bandlimited communications channel, with lots of reflections and dispersion!

The bandwidth of the tube determines what individual frequencies get through, but also -and this should not be overseen- how long it takes for a switched frequency to be discernible from others. That limits how fast you can switch from one to another.

If you transmit tones (of around 1kHz), the longer the tube the longer you have to hold the tone before the receiver can determine what frequency was sent. Through longer tubes it takes time for a switched sinusoid at the input to start looking like a sinusoid at the output. This is not just a matter of tube delay (pure delay wouldn't limit your transmission rate) but rather due to the reflections inside the tube.

For more details on the bandwidth for FSK see here: 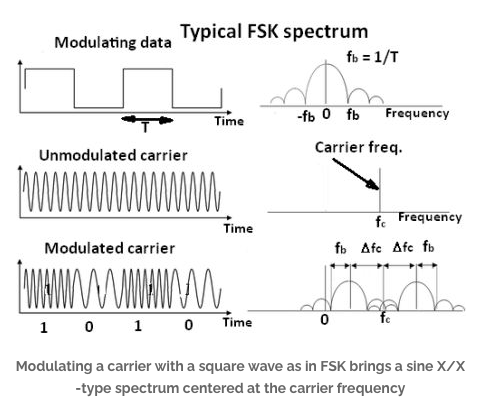 Notice that the bandwidth is "blobbier" than just two spikes at two frequencies, and the total width is more than the just the span between the two frequencies.

I know this is way to simple, but is it in the right direction?

Sorry, that's not really how it works. This is all well captured in the Shannon-Hartley Theorem, which is refreshingly simple: Take a look at https://en.wikipedia.org/wiki/Shannon%E2%80%93Hartley_theorem

There are basically two things that determine the amount of information that you can send: bandwidth and signal-to-noise ratio. One way to think about this is "symbols". A communication stream sends a bunch of "symbols" from the transmitter to the receiver. The higher the bandwidth, the faster the signal can change and the more symbols per second you can send. The higher the signal-to-noise, the more bits you can stuff into one symbol.

Not the answer you're looking for? Browse other questions tagged frequency modulation wave bandwidth bit-rate or ask your own question.

6
Why do all digital signals have infinite bandwidth?
5
RF Bandwidth vs Data Rate (modulation)
4
Does the fundamental frequency affect the bit rate on a wire?
5
SPI communication - bits per second vs Hz
0
Maximum signal data rate
4
Why does more bandwidth guarantee high bit rate?
1
How does widening the frequency band allows us to make faster pulses in a radio link?
14
Why doesn't higher frequency mean higher data rate?