I am an electrical college student.

I learned from some papers, sites online, including this forum that lightning discharge or any electrical arc emits wideband radio frequency because the odd integer harmonics of a square wave and an electrical arc is similar to a square wave. (Correct me if I am wrong, please)

Today I tried to generate an impulse voltage with a multistage impulse generator.

Here is the picture of the waveform from the oscilloscope: 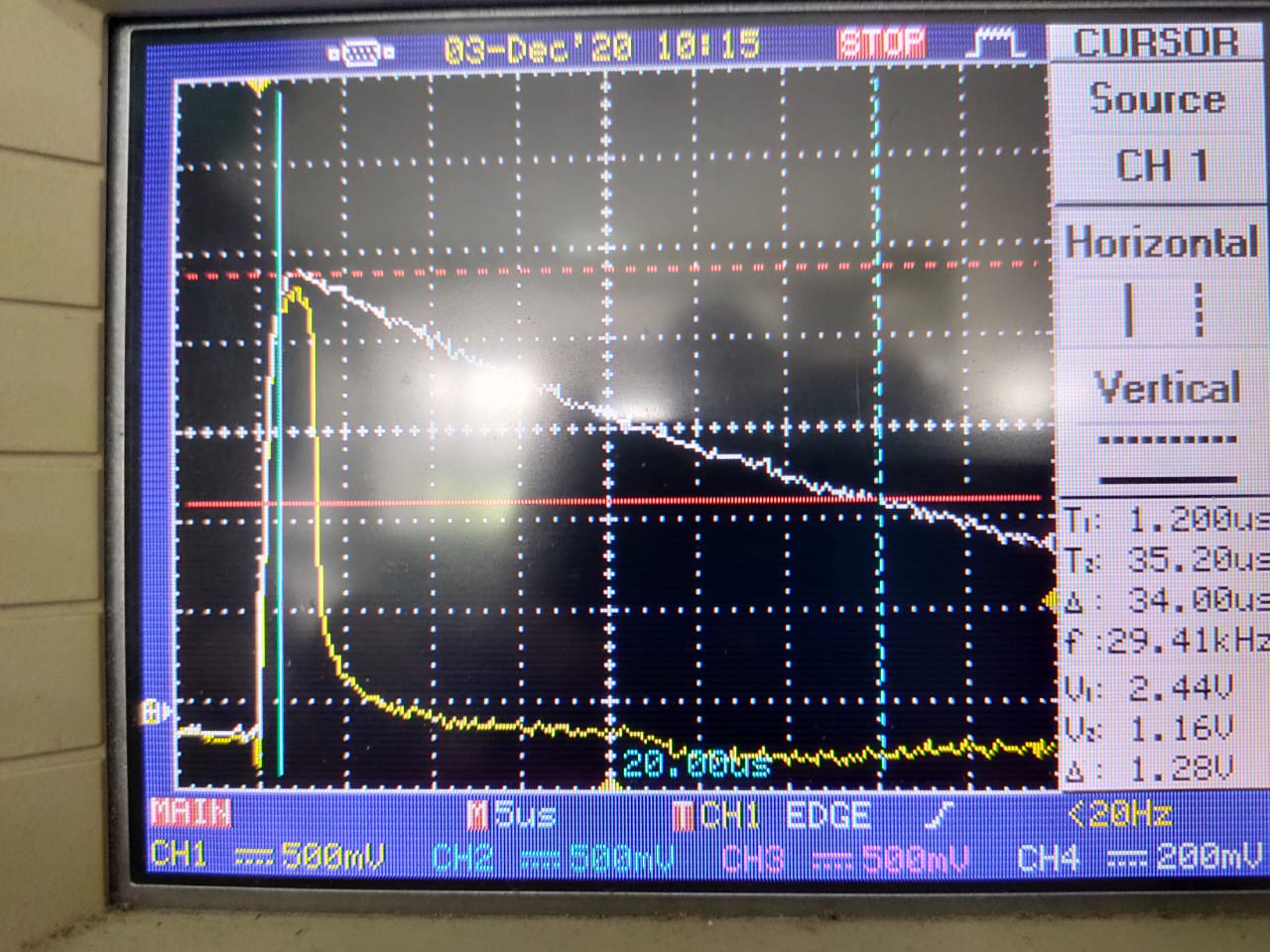 I want to know what exactly the electrical arc creates electromagnetic waves on a very wide frequency really means, and how.

Unfortunately also the wires and the edges of the gap are a part of the system where the current suddenly starts. They can as well radiate. They also have capacitance and inductance which radically affect what's the actual waveform of the starting current. Early radio makers especially tried to initiate narrow band oscillations with sparks to get as sinusoidal radiation as possible. It helped to get design problems manageable.

People can present objections when I didn't mention voltage. It has as big role as current. In a gap generally the voltage collapses because the air becomes very conductive. But actually the interesting voltage is what's induced by the accelerating current. Static nor linearly growing current do not radiate.

Unfortunately there's no easy way to calculate the caused radiation, one must solve ultra complex space vector field differential equations. Antenna designers use either numerical methods or make approximations by dividing the current area to elementary dipoles. If you want to learn it prepare to study say one full days university level math to be able to understand it.

Your Oscilloscope image doesn't give any possibilities to even guess the generated radiation after assuming a certain gap because the interesting part - the rise of the current - is out of the resolution, it looks vertical. You have used far too slow equipment.

If your gap is the open end of a 2 parallel wire transmission line which is fed by a properly terminated voltage source you have a theoretical possibility to get radiation only from the gap with no resonances of the wires, but only in the usable frequency range of that transmission line. That radiation could be in theory be measured with a measurement antenna and spectrum analyzer.

Prepare to some real work because the receiver must be far away and its antenna must be small to prevent any phase difference problems due the distance differences between the parts of the gap and the parts of the receiving antenna. You must do a long integration to pull the noise levels down. You need non-echoing room.

"Can I get the frequency domain from this yellow wave with fourier transform?"

If you can get the event to repeat, and can trigger the scope reliably on the rising voltage (shouldn't be a problem by the looks of it), then you can indeed use the scope's FFT function to get a spectrum. (but see the other responses about how this isn't the same as the emitted radiation)

"since this is a non-periodic wave, can I get the frequency spectrum"

yes, even non-periodic functions can be expressed as a sum of sines, cosines, and exponential rise/decay, which is the idea behind the fourier transform and its relatives. The exponentials are complex frequency.

Not the answer you're looking for? Browse other questions tagged electromagnetic fourier frequency-response arc spark or ask your own question.

0
Simulating a "spark gap" in PSPICE
1
Noise from stun-gun based butane torch ignition spark is locking up ATmega328 microcontroller
0
Increase Arc Lighter Spark Gap
3
Circuit analysis of a spark gap
1
How possible is producing very high voltage and electric arc by a using this simple setup
0
Gibbs phenonemon in real life
5
How can I generate a noisy environment to test my PCB?
1
Aperiod vs Period waveform Fourier Transform: How does nature understand which is the case?
0
Question on spark gap transmitter circuit