What is this effect I am seeing in a current/voltage plot of a 2N2222 NPN transistor?

I have been working on a home made IV tracer for diodes and transistors.

I noticed a slight curlicue in the low voltage and low current end of the plot for a transistor, and wondered what was going on.

This is the plot of the collector current and collector voltage for a 2N2222 transistor made with my setup: You can see the "curlicue" down there at the lower left corner.

This is a closer view of the "curlicue": 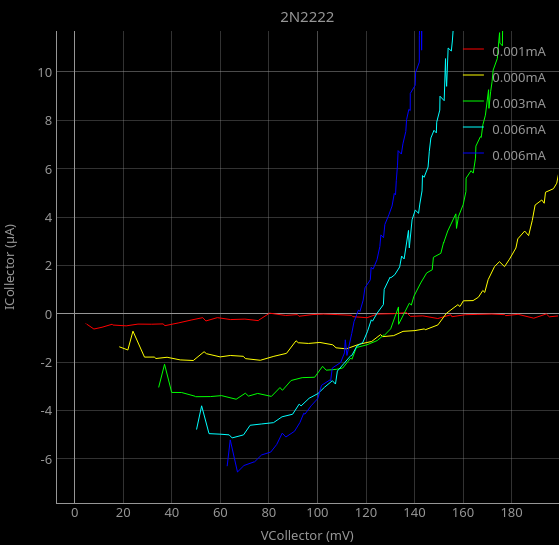 I've been trying to figure out what is going on here.

This is the circuit I used to make the plots: 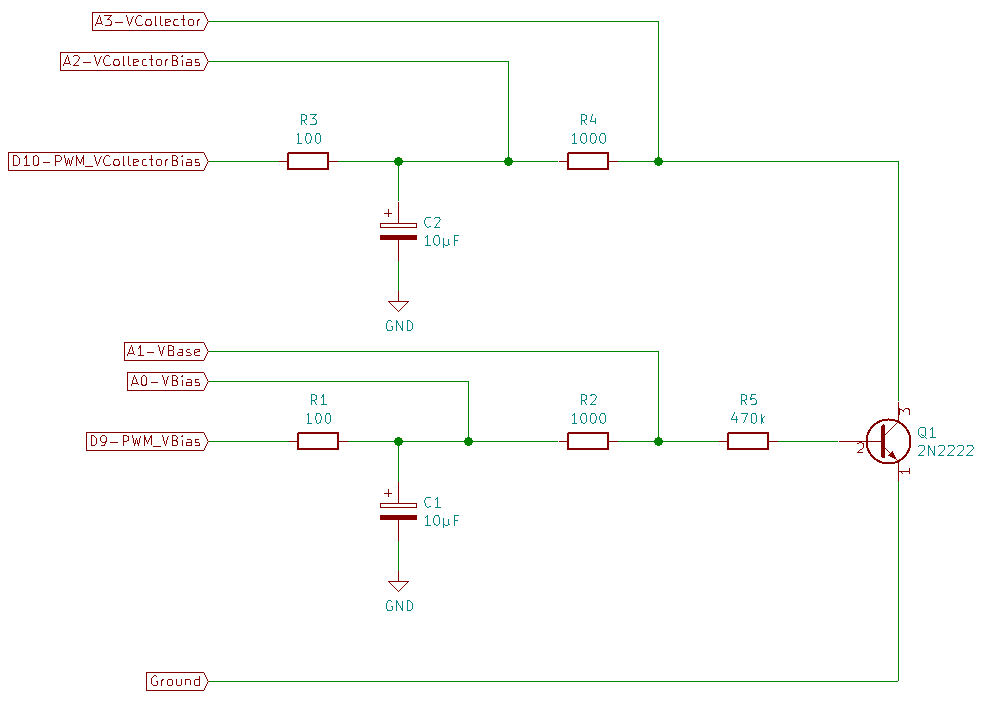 There's an Arduino Nano off to the left connected to the analog and PWM signals. It uses oversampling to get better than the 10 bits of resolution of the Arduino ADC.

Does that explanation seem right, or have I missed something?

Between those two charts, I changed R4 from 1k to 10k and made some software changes to get a little more resolution.

At a suggestion from Hearth, I simulated the circuit in LTspice. 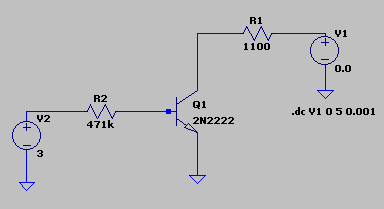 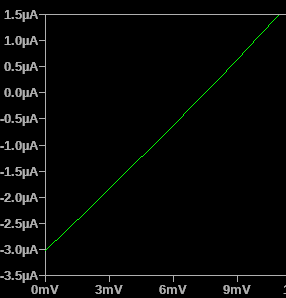 It does in fact have a negative tail, though not as extreme as in my circuit. The tail in the simulator is also straight rather than curved.

At any rate, the "tail" isn't a figment of the Nano's imagination. 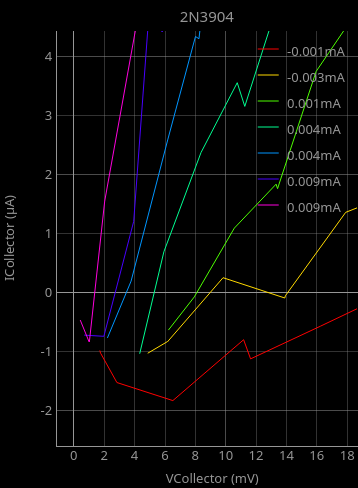 It also has a negative tail on the collector current, though much smaller than on the 2N2222.

That is what is expected even with the simplest model of a BJT. You can see it in this simulation 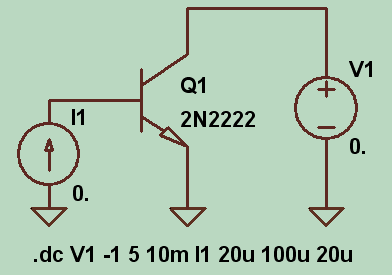 If we zoom in in the VI chars 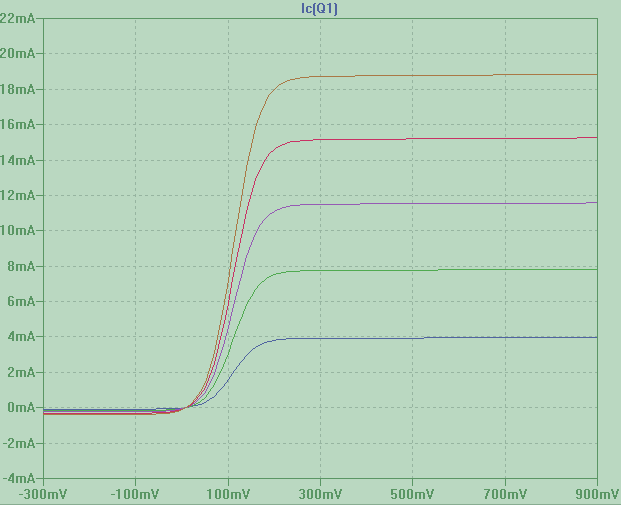 we can see that the chars do not intersect at 0,0 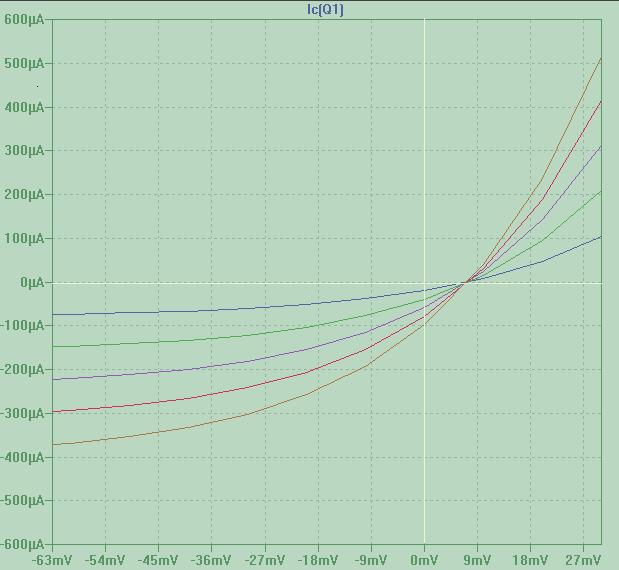 The shape of the curve (excluding the Early bending) can be seen in these equations (Millman Halkias, Electronic Devices and Circuits,"Voltages as functions of currents", p. 250)

or, in more modern notation 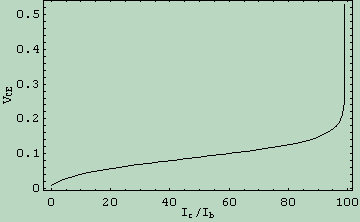 and if we zoom in near the origin we see 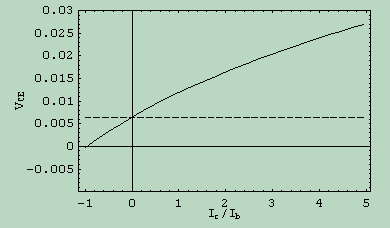 that is compatible with what Millman shows in his textbook 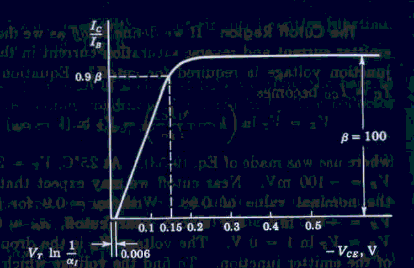 I think you are at the limits of the accuracy for the Arduino A/D converters. The resolution of the converters is about 5mV, or about 5\$\mu\$A through a 1k\$\Omega\$ resistor. The absolute accuracy of these converters is much worse.

To make this circuit work with an Arduino you should be using larger resistor values, and you need to very carefully calibrate all of the ADCs.

The fact that you see it with 3904 is interesting. What do you see at these nodes if you look at it on a real scope?

Some shots in the dark:

2
Why is this voltage "negative" in this simple BJT circuit polarization?
1
Is there anywhere I can download BJT Transistor I-V data?