Is there a commonly used name for a “local ground” or “local common”?

Suppose we have a circuit that measures some external voltage like so: 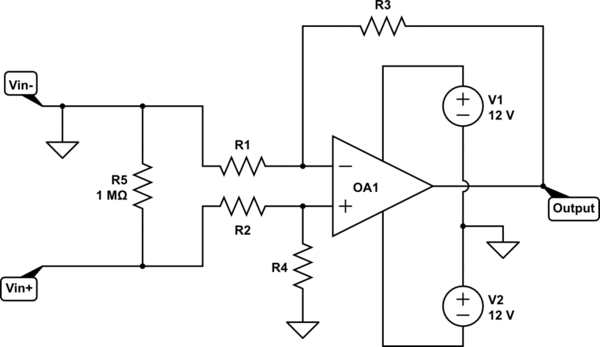 We will assume that the circuit is powered by batteries, and the circuit is well insulated and isolated from coupling to other circuits except through the \$V_{in+}\$ and \$V_{in-}\$ nodes. The "ground" in this circuit is just a common reference point in this circuit, and is not connected to any external "ground". Because this measuring circuit is isolated in this way, it can be used to measure potential differences (differential voltages) that themselves are at a potential difference from an earth ground. (Think of a battery powered volt-meter).

Now let us suppose that the above circuit is used to test a voltage in another circuit which has it's own ground, let's say a ground connected to the earth. However, the ground in the circuit under test is not where \$V_{in-}\$ is connected. Like so: 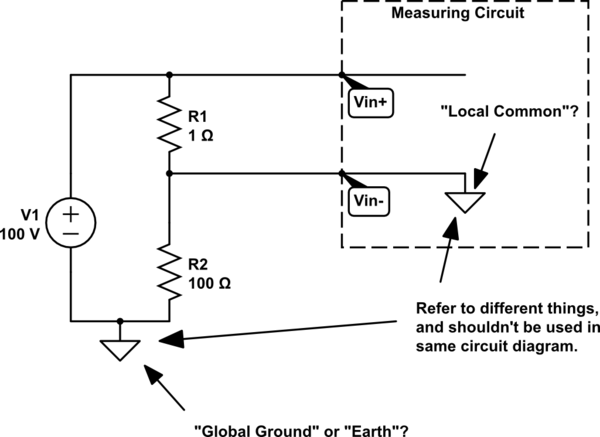 My question is whether there is an accepted terminology to explain this situation. I am tempted to call the "ground" in my testing circuit a "local ground" or a "local common" or a "floating common". But I would like to use terminology that others might readily understand as referring to a situation like that described.

There is no accepted terminology, but most people use similar terms.

I've never heard the term local ground, usually a more descriptive term is used, like what the ground is attached to. The thing I usually do is differentiate grounds if they need to be physically separated, if they don't then just label them ground. Usually chassis ground or mains ground and analog and digital grounds need to be separated. (although many designs do not need separate analog and digital grounds when designers incorrectly think they do)

Grounds fall into two categories as follows: (1) safety grounds and (2) signal grounds. The second category probably should not be called grounds at all, but rather returns, and it could be further subdivided into either signal or power returns. If they are called grounds, they should be referred to as ‘‘signal grounds’’ or ‘‘power grounds’’ to define the type of current they carry and to distinguish them from ‘‘safety grounds.’’ Common usage, however, often just refers to them all as grounds.

In isolated designs, I have referred to grounds as GNDA GNDB GNDC (to keep them separated in the design)

Another common one is GND and GNDE to differentiate the PCB ground and earth ground or mains/chassis ground. Mains and chassis grounds typically use different symbols. 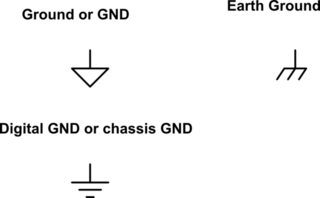 Not the answer you're looking for? Browse other questions tagged ground terminology instrumentation teaching or ask your own question.

8
Common ground and voltages
0
Charging lead acid (car) batteries with a common ground
13
Common vs. ground
30
“Ground” vs. “Earth” vs. common vs. negative terminal
1
How can a buried terminal have different potential than earth potential?
1
What are the risks of running a floating ground through insulated wire underground?
3
Why doesn't electricty flow to earth ground when I connect my oscilloscope ground clip to a floating circuit?
0
Ensuring 'common' ground on my devboard : powering externally, + JTAG + VirtualCom with USB
0
Ground offset or common mode noise voltage