We would like to use a toroid core and hall effect sensor shown in the figure below for measuring current in an Electric Vehicle from a battery pack. 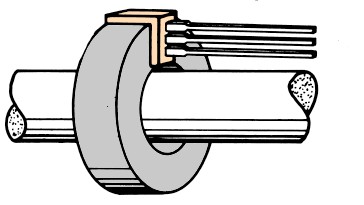 Would placing the wire carrying the return current next to the toroid affect the sensing?

I would say not (but please do use a high permeability core): -

Consider the normal current through the central conductor first: - 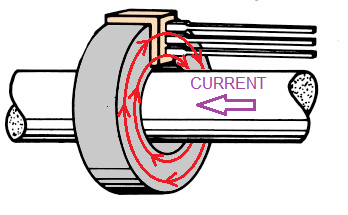 It will produce lines of flux that pass through the hall-effect sensor. \$\color{red}{\boxed{\text{✓}}}\$

Now consider what happens with the close-by return conductor shown below: - 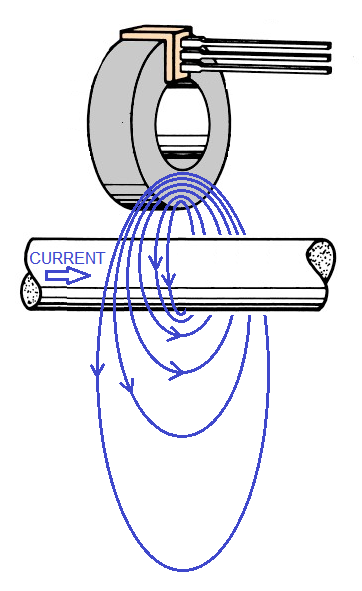 The lines of flux will naturally take the most convenient path and, that is through the lower half of the ferrite. They won't want to pass through the top half because there is an air-gap where the hall-effect sensor is and, the magnetic reluctance is high. Clearly if you have a low permeability core, then it isn't as clear-cut but, who'd want to use a low permeability core in this type of design?

The other option has the hall-sensor close to the return conductor but there'll hardly be any influence either: - 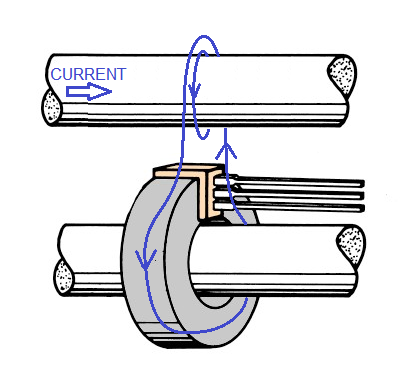 In other words, any lines of flux reaching the split toroidal core will not want to (or need to) flow through the gap where the hall-sensor is because, there's a lower magnetic reluctance route going nearly all the way around it.

Having said all of that, there could be some small disruption of the measurement but, this is easily solved (if noticeable) by putting a full (or split or partial) ferrite toroid ring around the return conductor adjacent to the forward current sensor's toroid ring.

I doubt that would work - you need to use ferrite to shape the path of the magnetism and draw it away from the hall-effect sensor's toroid.

And, as a final footnote. The red lines of flux around the toroid caused by forward current in the top scenario will be partially cancelled by any blue lines of flux due to the return current but, that cancellation will not occur where the hall-sensor is placed; the red flux lines will appear at that point virtually unaffected. Flux is difficult to understand for most folk (including me sometimes) but flux can do this; almost disappear then re-appear. 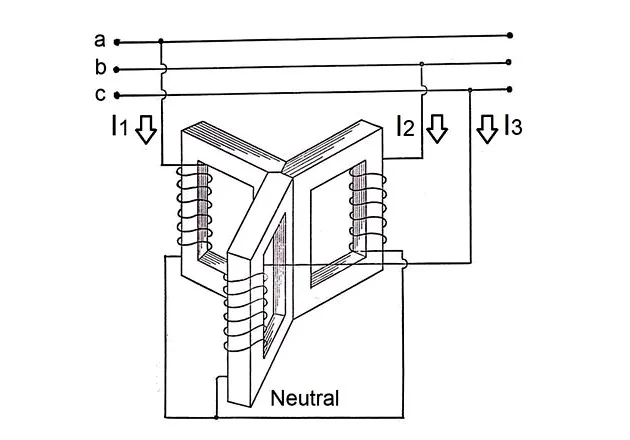 Picture from here. Think about the magnetic flux through the centre-limb; it has to be zero because, for a balanced supply on the primaries, all three individual magnetization currents are balanced and cancel. So, flux can appear and, it can disappear.

Not the answer you're looking for? Browse other questions tagged electromagnetism current-measurement hall-effect toroid or ask your own question.