How are two definitions of baud rate same?

The bit rate V baud rate has been a confusing topic for me lately. I feel like I am clear about the difference between these two.

For baud rate: According to first definition, baud rate is 1 baud per second. 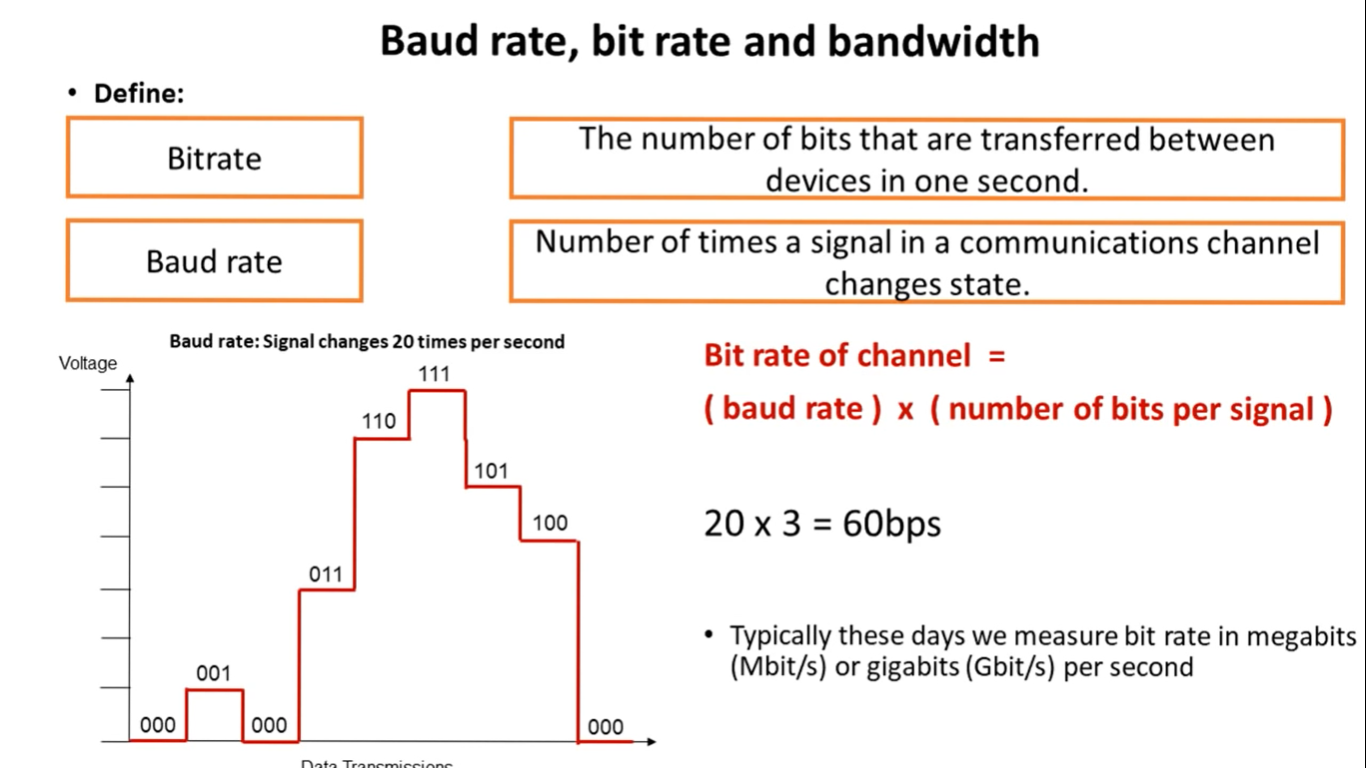 Data transmission has always some bits of overhead for giving the payload data a frame so that decoding it is possible with some certainty. Thus sync signals and also parity signals are there. On bus systems further multiplexing (routing) information is part of it. In modern systems there is even some parts used for data priorization (effectively part of the routing duty) and for media quality measurement such as DSL signal optimisation.

For RS232 you have for example the start and stop bits, and the optional parity bits - applied to each character bit (might it be 5 to 8 bits long). For Ethernet you have the whole IP header that encapsulates your payload data in a package. Further there are For CAN bus there is an address field and some checksums along with other bits. For bit-serial busses like I2C, SPI and alike you often will find read-write bits, address bits and also start/stop bits along with checksums and even feedback/confirmation/error bits.

Rationale: What's sent on the channel is more than just the data bits you want to be sent but also some extra data making it possible for the receiver to really decode your data bits. For this some extra bits are added and later on removed again. This extra bits are counted on the channel's baud rate but they have to be subtracted to estimate the maximum transfer data rate that you as a user will e able to achieve.

What else? Parallel busses have more than one wire and thus are able to transmit multiple bits per transmission step. Further the control flow is realized as separate wires. Thus an 8 wire + control flow wire interface can have 8 times the data rate than the baud rate.

The key word "symbols" is a term found in modem technology. With a certain signal shape more than one bit is encoded. This can be for example multiple tone signals send in parallel (DTMF) or other types of modulation (FSK, PSK, QAM, ...). Thus meaning the tone frequency and the switching speed between sent symbols (no longer bits) is quite decoupled. (Of course there is the Nyquist theorem of limiting a channel to some maximum raw data transmission capability.) So if you have for example 64-value quadrature amplitude modulation - then you will have a bit equivalent to those 64 values of useable channel capacity that is sent and received on each of the baud-rate steps. 64 values would mean 6 bits of raw data per baud-rate step. (Still even with this a few values might be reserved in order to achieve various types of bit and byte border synchronization as well as for channel duties.)

The letter 'A' is not a symbol in this context. A symbol is a recognizable distinct value on the communication channel; it is a quantum of transmittable information.

For a binary communication channel, a symbol is either a 0 or a 1. If you are talking about conventional UART kinds of transmission, then every transmitted byte of information will also need a start symbol and a stop symbol. So, you have to transmit 10 symbols in order to transmit 8 bits of information. The maximum information (bit) rate is 8/10 of the maximum baud rate.

Some kinds of communication can send multiple bits per symbol. In the old fashioned touch-tone dual-tone multiple-frequency (DTMF) telephone systems, pressing a button on the keypad caused a sound to be transmitted. Each sound was a symbol. Each sound comprised two audio frequencies, one frequency corresponding to a row on the keypad and the other frequency corresponding to the column. With four rows and four columns, each sound corresponded to 1 of 16 keys. So, each sound conveyed 4 bits of information.

If you are going to transmit three bits at a time you have to use eight different frequencies (as in the case of FSK). So, each symbol will have three bits and the symbol rate (which we call baud rate) will be decided prior to transmission. This is your 'second' definition. For some modulation schemes such as ASK, BPSK, and PSK, the bit rate equals the baud rate.

Not the answer you're looking for? Browse other questions tagged baud or ask your own question.

0
Ambiguity about concept of baud rate and bit rate